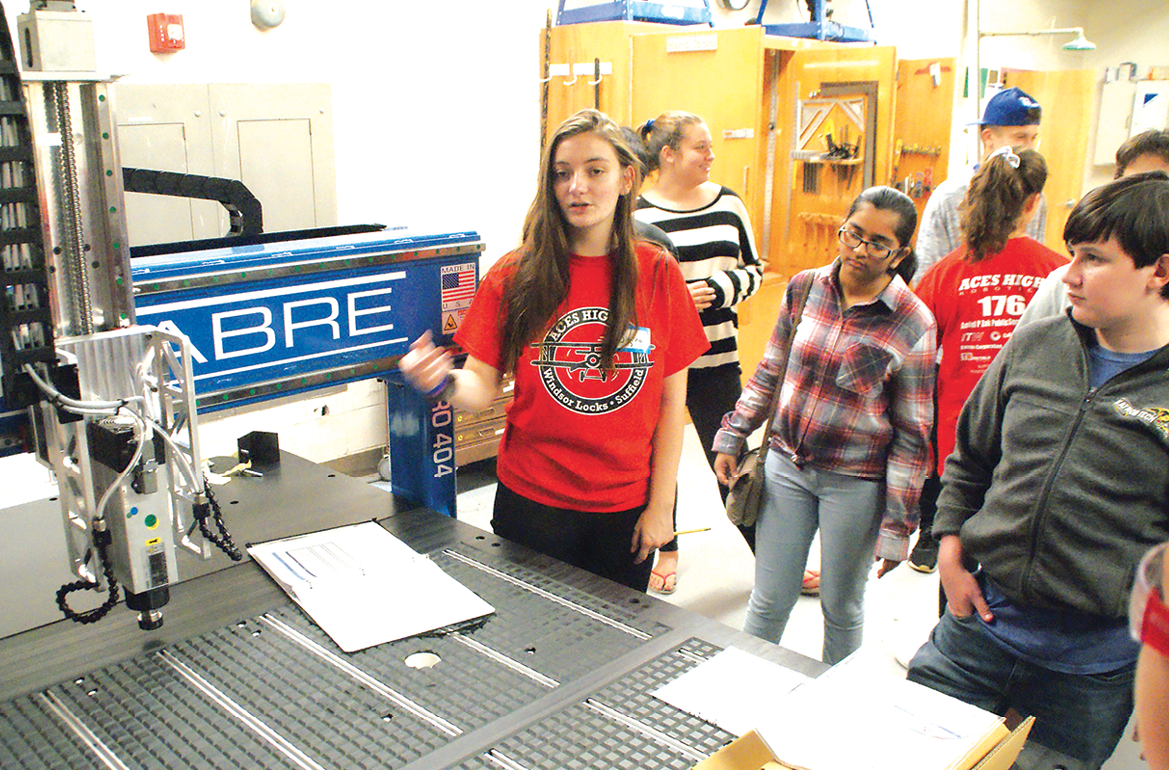 At a Windsor Locks High School open house for the Aces High robotics team last fall, team member Sierra Hill explains the new router in the wood shop. The computer-controlled machine, financed largely by a Zak Grant through the Hartford Foundation for Public Giving, is useful for machining parts for the team’s robots.

Aces High, Team 176, our local team in the FIRST Robotics Competition, has been a great competitor ever since they were organized at Windsor Locks High School in 1995. Suffield joined in 1998, and the team won the National Championship in Florida the following year. Last year Aces High became Connecticut champion again and finished second in New England. In the 2019 world championship in Detroit, they performed well and reached the quarter-finals but lost the third match in that two-out-of-three elimination. These achievements are shared, because the carefully designed FIRST program has individual teams competing in three-team alliances, a teaching strategy that encourages cooperation and what FIRST likes to call “gracious professionalism.”

Every year a new game is announced, so each team has to design and build a new robot with capabilities matched to new challenges. And the complicated scoring changes each year.

The robots generally have to grasp an object – different each year – and place or toss it somewhere. This is done on a busy playing field with many robots maneuvering speedily around among various obstacles. For a short period at the start of a match, robots that have the capability to operate autonomously attempt to make some good points; otherwise team members control the action remotely. A special challenge each year offers points for robots that are positioned in a specified manner at the end of a match.

This year the game, announced early in January, is called “Infinite Recharge.” Our Suffield/Windsor Locks team has been working in their Windsor Locks High School shops creating a robot that can rotate disks on a “Control Panel,” collect and toss “Energy Cells” into high and low receivers to fuel the alliance’s “Shield Generator,” and hoist itself up on a “Shield Switch” balance beam, hopefully balanced by another robot, thereby enabling the “Shield Generator” to protect “First City” from approaching asteroids.

Team advisors Peter Davis and Suzanne Wosco reported in early February that design work was about finished and the team’s new 3D printer was churning out critical parts for assembly.  Aces High builds two robots, one for practice, the other for meets.  It’s an incredibly challenging task.

Aces High is booked for their first meet at Wilby High School in Waterbury, March 6 – 8; followed by a second in Springfield at Western New England College, March 22 – 24; then at Hartford High School, April 3 – 5. They will encounter frenemies from past meets: veteran teams like Rage Robotics from Tolland (Team 173), the 2nd Law Enforcers from Farmington (Team 178), and the CyberKnights from Southington (Team 195), as well as young teams with numbers up in the 6000s.

Our team expects to qualify for the New England Championship meet at the Big E, April 8 – 11, and then, if all goes well, compete in the World Championship in Detroit, April 29 – May 2. But it may be difficult to show up in Detroit. FIRST Robotics is an expensive activity, with limited school support, and in today’s economy, industrial support is hard to find. Team 176 is grateful for their major Zak Grant last year, and is applying again this year. They would appreciate any help Observer readers may offer; call team mentor Ron Horn at 860-874-3041 for information.

Next Article
Let’s Change the Trend
At the risk of being overly dramatic, I must say that without…