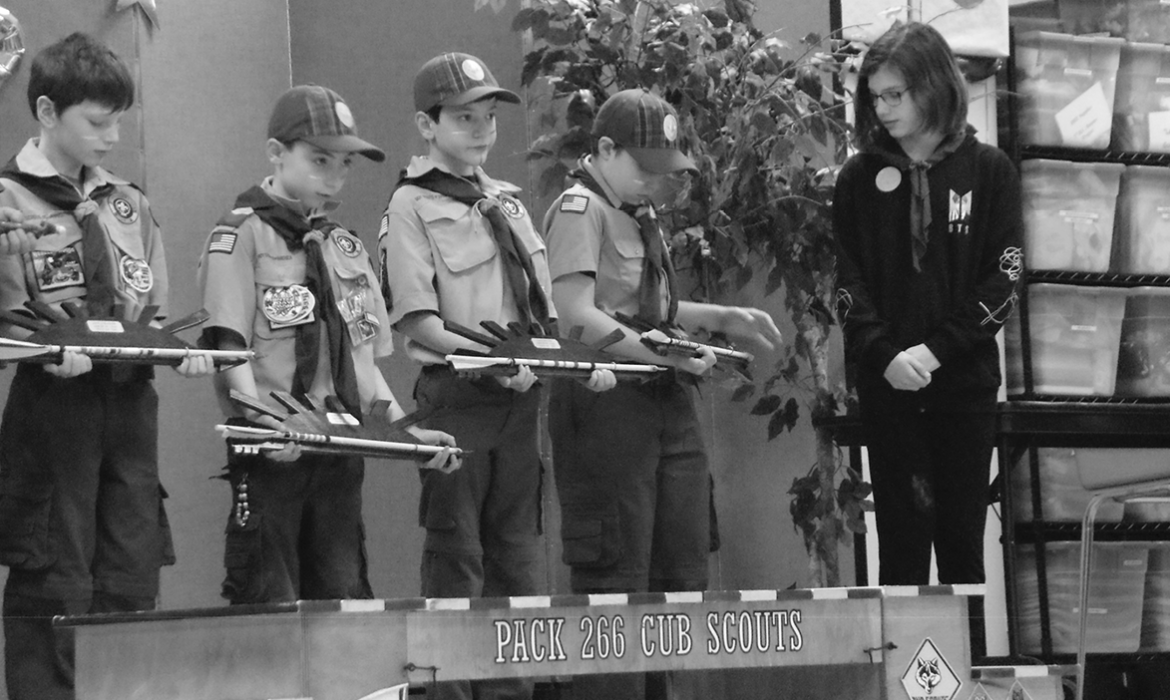 New Boy Scouts who had completed their February 1 cross-over ceremony from Cub Pack 266 show their new Arrow of Light plaques. From the left: Jack Loranger, Logan McHugh, Cole Snyder, and Silas Katulka. Not pictured were Ethan Boldt, Jack Ryan, Jack Tautic, and Liam Welch. At the right is Kacy Loranger, who, like the former Cub Scouts, had also been welcomed into Scout Troop 260.

This year, eight Cub Scouts of Pack 266 successfully completed their multi-year program of activities and learning, advancing to become Arrow of Light Cubs and cross over to become Boy Scouts. The Blue and Gold Banquet with its Arrow of Light ceremony and Boy Scout welcome was held in Father Ted Hall at Sacred Heart Church. It began with the usual recognitions and the tale of how the overall Boy Scout program began in The U. S., narrated nicely by Mike Cremmins, former Cubmaster and now Scoutmaster of Troop 260.

Then the candles were lit – one for each recitation of the various parts of the Cub Scout promise, law and motto. As a Boy Scout archer sent arrows into a target, each Cub was named and given his credentials and a plaque with his own Arrow of Light. After each Cub crossed a wooden bridge on stage, he was greeted by a team of Boy Scouts, who welcomed him into their troop and draped the initial Scout neckerchief in place, with his first neckerchief slide. As sometimes happens, all the new Scouts elected to join the same troop – in this case Troop 260.

An atypical event was added this year when seventh-grader Kacy Loranger was welcomed into Troop 260 following the cross-overs. In accordance with last year’s change in the Boy Scouts of America, now called Scouts BSA, girls can join Scout Troops and “learn from the same program, earn the same merit badges, and achieve the same advancements” as the boys. Last year three girls became Scouts in Troop 260. The troop will welcome other girls wishing to join this year.

But it was typical that the fine buffet dinner that followed the ceremony and the Scout welcome was satisfying to all. And the magic show that ended the evening, directed mostly to the Cubs and Scouts, was enjoyed most by a happy bunch of kids.