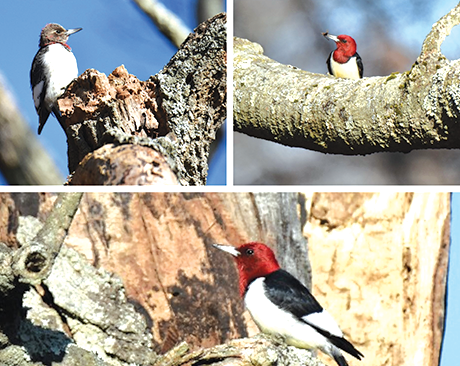 Legacy trees, even after their prime, provide a favorable habitat for these redheaded woodpeckers at Hilltop Farm.

When we were growing up, my best friend and I liked to channel our inner primate by heading for the trees. We’d spend lazy afternoons climbing towering white pines with all their branches about to give way. We’d be gone for hours and come home reeking of sap. That was something we could live with, as it was a small price for freedom and a bird’s eye view. We weren’t the only ones climbing trees to pass the time. Pretty soon we caught wind of a gang of boys who had built a multi-storied tree house in a red maple down back. Every board had been pilfered from some parent’s garage or the sides of a tobacco shed. Not one plank was new, they were rotted and the nails used to hold them in place were rusty. The tree house was no thing of beauty as it was built for nothing with materials scavenged, designed and built by kids, and it was not an adult friendly place. No parent ever laid eyes on the fort, and that’s the way it was supposed to be. This was not a place for calico curtains or flower boxes as it was testosterone heavy, the ladder was off kilter and difficult to climb. If you were someone’s little sister, you might be allowed in but only if you shut up and did not act or dress like a girl. We didn’t care, as the arboreal lifestyle was where it was at. So we passed our days with our feet barely hitting the ground.

This past summer my feet were definitely hitting the ground, and I encountered a forest ranger who enlightened me about trees. He talked about forests as superorganisms with the trees connected by vast fungal networks. Through these networks the trees communicate about lots of things including insect activity, drought, and illness. Not only do they convey messages but they also send help in the form of nutrients over to an ailing tree’s roots for support in hard times when photosynthesis is a challenge. He outlined the trees’ abilities to rally together to protect weaker specimens all for the good of the forest as a whole. So a walk in the woods will never be quite the same as I look for evidence that stumps are being kept alive long past their final days and wrap my head around the notion that trees are literally reaching out to their neighbors, pulling for them, all thanks to information passed beneath our feet. All this is happening with one tree after another having learned through the subterranean grapevine that trouble was abrewing. It’s just another one of nature’s awe-inspiring tricks.

As I wander around our little town, I like to admire the trees, especially those legacy ones that have been standing for a century or so. Usually they are wearing some battle scars in the form of burls or knotholes while providing a habitat for some ants and maybe a woodpecker or two. And now that I know that important messages are being conveyed between them under the cover of soil, my synapses are really firing. So these grand trees poised here and there look a little more special. Maybe they can join the ranks of some pretty famous trees that have stood the test of time and enter my psyche when I least expect it. Perhaps here within our town borders we have a tree that can hold its own next to Mr. Rochester’s chestnut, Andy Dufresne’s oak solitaire, and Boo Radley’s knotholed oak looming near his porch. A hundred year old tree that looks out for its forest mates is definitely worthy of the highest honors. If only it held a knothole with some dolls carved out of soap, now that would be something!

Next Article
Keep Your Lawn Healthy: Aerator Anyone?
A yard can become hard packed from frequently walking or playing games on…