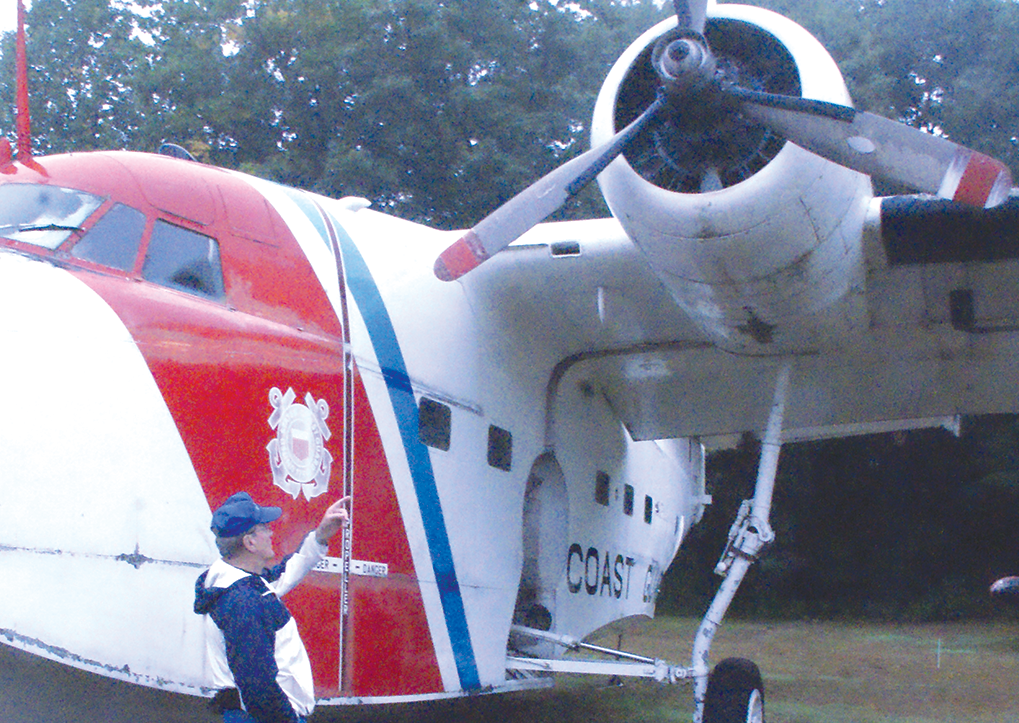 Air Museum volunteer John Gloria points to one of the Hamilton Standard propellers on the Grumman Albatross he once flew regularly for the U. S. Coast Guard. While the Albatross is amphibious, Commander Gloria, retired, said water landings and take-offs were rare.

After John Gloria retired from Hamilton Standard in 1999, he volunteered to work in the restoration crew at the New England Air Museum, where he encountered an old friend. It was a surprise reunion, one that probably hadn’t happened before at the museum. His old friend was a Grumman Albatross amphibian, a.k.a. Grumman HU-16E, the very one he had flown regularly in Alaska for the Coast Guard.

The sturdy aircraft, one of a type first delivered for service in the USAF, but later flown by the Navy and Coast Guard as well, had been used by the Coast Guard for search and rescue over 20 years in several locations. John had flown it regularly, based in Kodiak, Alaska. Now an outdoor exhibit at the Air Museum, the old craft arrived in Windsor Locks in 1997, on loan from the National Naval Aviation Museum in Pensacola, Fla.

John Gloria graduated from the Coast Guard Academy in New London in 1964 and retired in 1984 with the rank of Commander. He came to work that year as an engineer at Hamilton Standard and still lives on North Grand Street with his wife, Judith.

At the air museum, he works with several dozen volunteers two days a week in the restoration hangar. Most of their work at present is devoted to the restoration of an odd aircraft that had spent many years as an outdoor exhibit. That’s the Burnelli CBY-3, a homely Canadian experiment from the 1940s that was expected to out-do the classic DC-3. Its thick, airfoil-shaped fuselage did improve the performance of the twin-engine transport, but it never went into production.

Next Article
Legacy Trees and their Storied Existence
When we were growing up, my best friend and I liked to…