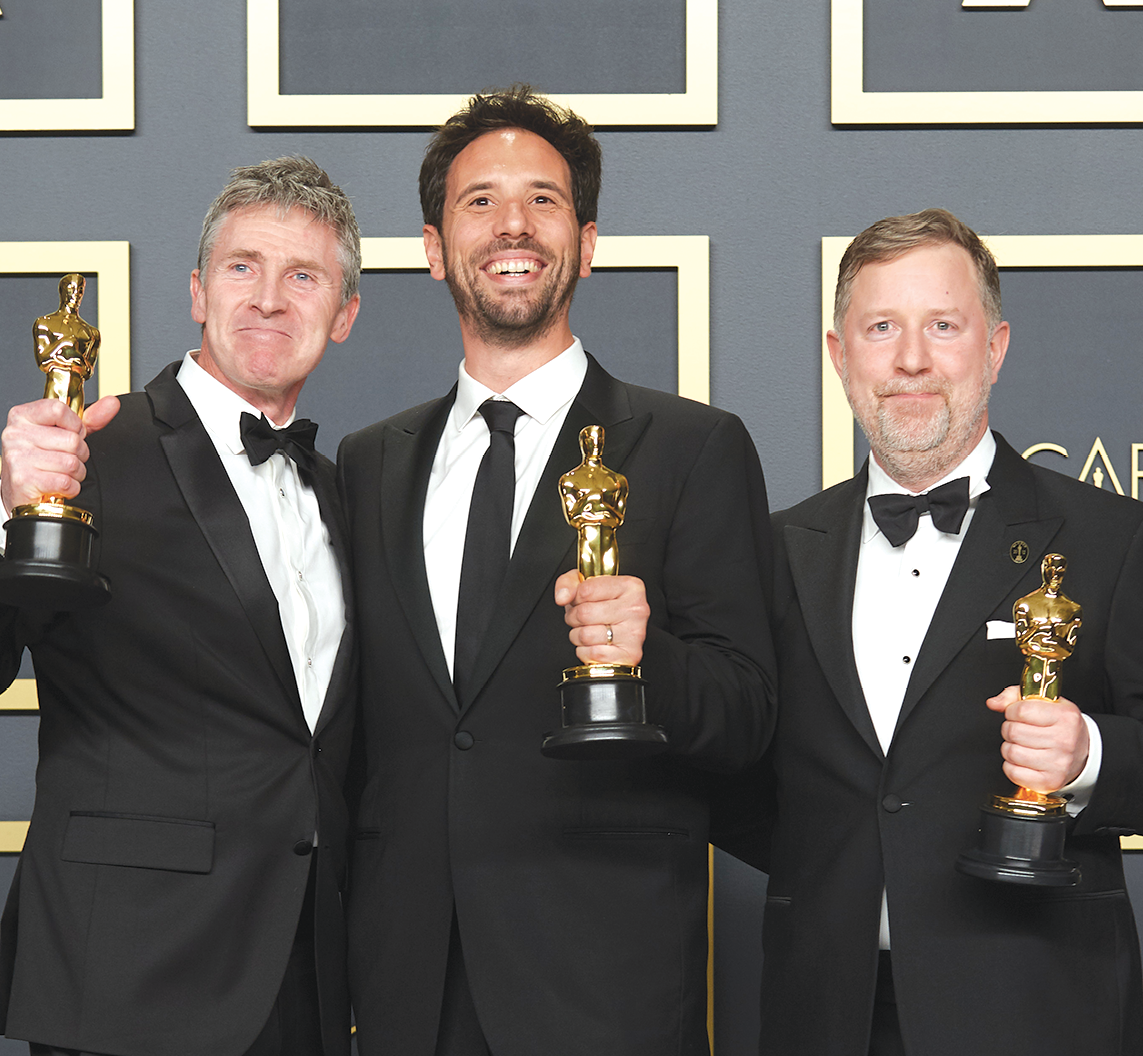 Dominic Tuohy, Guillaume Rocheron and Greg Butler pose with their Oscars for Best Visual Effects for their work on the film 1917. A week earlier, the creative team also took home the Best Visual Effects award from the British Academy of Film and Television Arts (BAFTA).

For one Suffield family, the first week in February was one they will never forget. On February 2, in London, native son Greg Butler, along with Guillaume Rocheron and Dominic Tuohy, won the British Academy of Film and Television Arts (BAFTA) award for visual effects for their work on the WWI film 1917. A week later, Butler found himself on the red carpet in Los Angeles, waiting to see if good fortune would strike twice and he would win the Oscar for Visual Effects for the same film. Although he felt that his team had a good shot at the prize, “there is always a level of uncertainty when you’re up against four other films that are worthy of a nomination.”

Butler at SHS on March 5
Greg Butler, Academy Award winner for the movie 1917, will speak on Thursday, March 5 at 7 p.m. at Suffield High School. This event is sponsored by the Suffield Public Library Foundation.

The Academy consists of over 7,000 members – mostly actors –  divided into 17 branches according to their specialty. Membership is by invitation only and nomination in a category makes you eligible to apply but you still have to supply credentials and be accepted. Butler has been a member of the Visual Effects branch for several years by virtue of his Oscar nomination for his work in Harry Potter and the Deathly Hallows Part 2. Only members of the specific branch can select nominees from that branch. All members, however, get to vote in all categories. So, it really is an honor just to be nominated since it is coming from people who know the field. Butler thought he had a good chance of winning given the complexity of 1917’s visual and special effects and the way the effects supported the story.

When reflecting on his career, Butler states that his generation was the first to grow up with digital effects. As a student in 1992, he interned at Industrial Light and Magic (ILM), Lucasfilm’s special effects and animation company in California, and there was no digital work being done. Special effects were done by using miniature scale models or by rotoscoping, which is a labor-intensive technique of hand painting over a visual element frame by frame to remove it from the footage. “At the time there were no visual effects schools and just a few computer animation programs. People got into the industry by knowing someone already in it.” Just a year later, upon graduating from Hampshire College, he returned to ILM, where the studio had begun its digital efforts, starting with a digital dinosaur director Steven Spielberg saw and loved and decided to make Jurassic Park using all digital dinosaurs. From that point ILM and other studios, particularly in Montreal, a headquarters for animation software, pushed forward with software and hardware engineering to improve computer generated special effects. Butler stated that while digital water and people are the most difficult to reproduce on film, there is not much left in the field that isn’t possible if you have time and money.

Butler has held numerous jobs in the industry over the years and has 37 films and one video game credited in his filmography. His first film credit was as a technical assistant working on Forrest Gump. In 1997 at Tippets Studio, he did digital lighting for Starship Troopers, which was nominated for an Oscar for Visual Effects. Perhaps the watershed event in his career, however, was when he accepted a job with Peter Jackson’s WETA Digital and relocated to New Zealand for six years to work on the Lord of the Rings (LOTR) trilogy. Because it was so far away from friends and family, Butler was hesitant, but his brother, Jared, a screenwriter in LA, convinced him in sibling fashion, that he was stupid not to go. His then girlfriend, now wife Lisa, was also on board with the move, and off they went.

Of all the movies he has worked on, one of his two favorites was Lord of the Rings: The Two Towers which was the second one in the LOTR trilogy. When asked why it was a favorite, he said that it was the team that worked on the film that grew together and made it a wonderful experience. “During the first LOTR movie, we didn’t really have our feet under us. Gollum as a digital character had only a cameo, and we didn’t really know how we had done what we did. By the second movie we were trying to prove that the groundbreaking work we had done wasn’t a fluke. It was a wonderful coming together of people in a creative effort.” Another top favorite was Harry Potter and the Order of the Phoenix because it was his first major supervisory role and he got to see an additional side of the business by working with clients and actors. “It’s interesting,” Butler said, “but some films I really liked working on were not as big a commercial or creative success as some that were very successful, but I found working on them not especially to my liking. I do think it is about the people with whom you surround yourself.”

After completing work on the LOTR trilogy, and I, Robot, Butler moved to London where he began as a visual effects supervisor for Moving Picture Company (MPC) on films such as Charlie and the Chocolate Factory, Harry Potter and the Order of the Phoenix and Harry Potter and the Deathly Hallows Part 2 for which he received a BAFTA for visual effects and his first Oscar nomination. After several years in London, Butler relocated with MPC to Vancouver, where he became head of visual effects for such movies as Godzilla, American Sniper, Maleficent, and Jersey Boys among others.

In the summer of 2017 he relocated with MPC to Montreal and worked on X-Men Dark Phoenix as well as 1917. At present he has left MPC and will work for one of the Montreal visual effects companies to be determined.

Butler enjoyed the hoopla and the invitation to the Oscars luncheon, which was a fun event. He reports that for the night of the awards, the Academy sends out instructions as to when you must be in your seat (by 2:15) and states that you have one minute from the time your award is announced until the music starts to get you off the stage, so if you shake hands or kiss your wife it counts against you. The Academy also prefers that only one person do the acceptance speech.

Butler didn’t get to speak on the big stage, but he was able to make his remarks on the “thank you cam,” which is backstage. He thanked his mother, Ellie, for “giving him confidence and the curiosity to get in and stay in the business,” and his sons, Steven and Andrew, “for traveling around with us on this big journey.”

When the Oscars ended, Butler and his wife attended the Governors Ball and went to the Vanity Fair party ending their exciting night at 1:30 a.m.

For her part, Ellie was thrilled for her son and to be a part of the festivities both in London and L.A. She was moved by her son’s expressed gratitude and told me that she was glad “he didn’t think about the nagging!”

Next Article
Get Your Scholarships Here!
The Suffield Observer will sponsor two scholarships to Suffield residents who will…