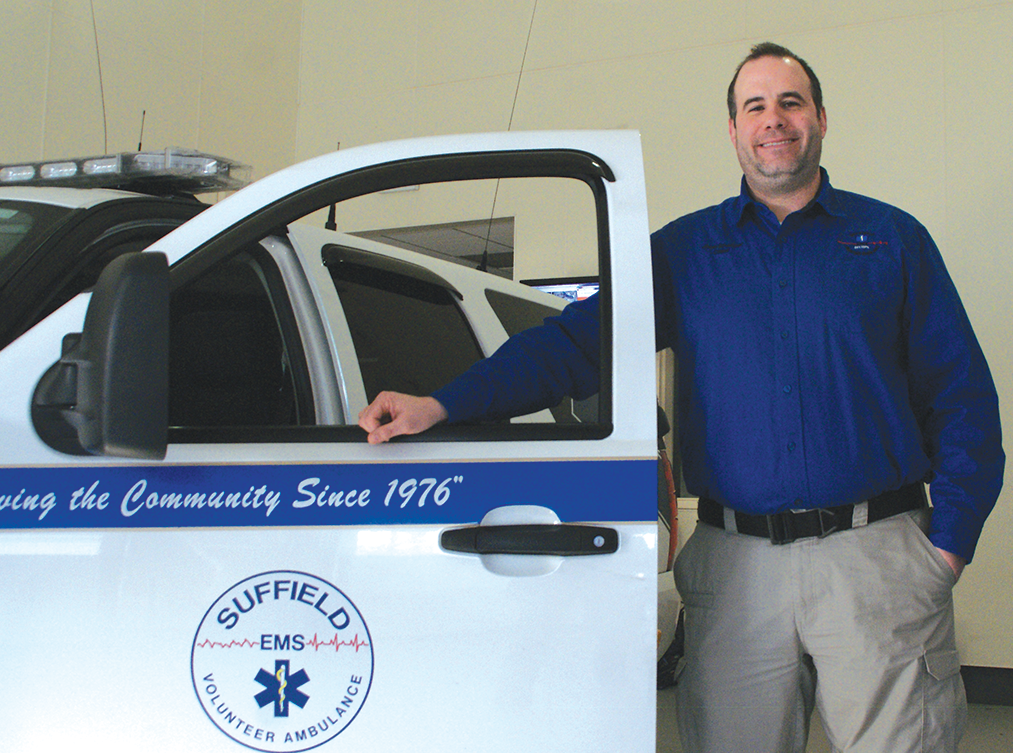 John Spencer, new Chief of the Volunteer Ambulance Association, is pictured in the equipment bay of the Suffield Ambulance Center.

John Spencer, the new chief of the Suffield Volunteer Ambulance Association, stated that he applied for the position because he appreciated the bond that exists between the community and the association. He feels that this relationship is very strong for such a small town.

The Granby resident has been associated with ambulance work since 2017 when he served with the American Medical Response (AMR) of West Hartford. He later served on the Granby Ambulance as a paramedic and then joined the AMR of Springfield.

The graduate of Anna Maria College in Paxton, Mass. earned his bachelor’s degree in emergency medical services and his master’s in public administration. His training has enabled him to serve as a regional supervisor of Emergency Medical Services and as a paramedic supervisor in Windsor, where he coordinated an in-depth effort to increase cardiac arrest survival rates within the community.

The new chief originally decided to be a police officer but “fell in love” with emergency services. He has an advantage in his work because his wife is a nurse whom he can share his feelings with and who understands what it means never to be immune to tragedies. The average worker burns out in about five years, and that is why it is so important for them to have someone to talk to about their experiences.

In their spare time John and his wife like to travel especially to the Caribbean, Mexico and Florida. The parents of two preschoolers, they enjoy taking them hiking and on long walks, and John enjoys working out at the Granby YMCA.

The chief has set a goal for himself of retaining and growing the active volunteer base of the Ambulance Association. He also wants to continue the bond with the community, and he is excited to be here for the 350th celebration, where he feels he can strengthen the bond that exists.