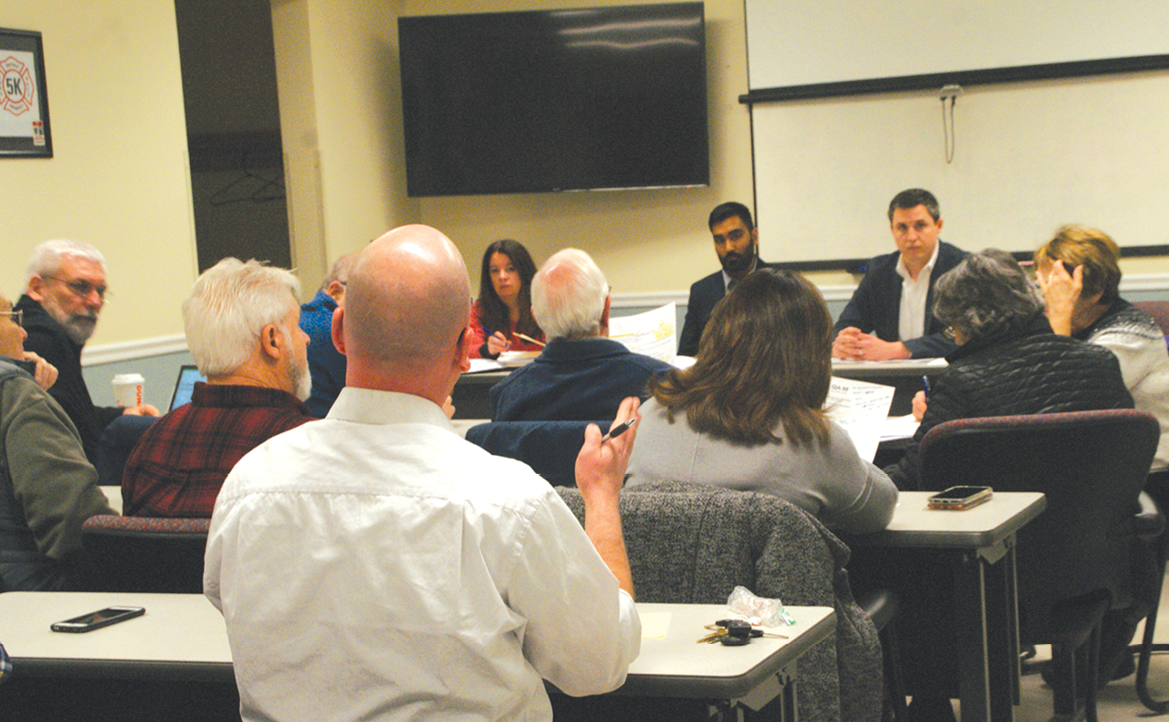 Facilities Director Chris Matejek, foreground, makes a point during a meeting of the Permanent Building Committee (PBC) on February 13. First Selectman Melissa Mack is sitting directly in front of Matejec, Committee Chairman Joe Sangiovanni is sitting ahead of her, to her left. Facing all the others are Angela Cahill from QA&M and Nishant Patel and Eric Cashman from Gilbane Building. Suffield Building Official Ted Flanders and five other members of PBC were also present, plus members of the public.

The Permanent Building Committee (PBC), often with the direct participation of First Selectman Melissa Mack, have been planning the renovation of Suffield’s Town Hall for several years, working with two different architects, EDM and QA&M. As reported by the Observer last month, in January the selected general contractor, Gilbane Building, advised that the cost would be close to $800,000 greater than had been thought.

At the February 6 meeting of the PBC, Chairman Joe Sangiovanni summarized the situation: $5.13 million had been appropriated by Town vote in 2015, based on estimates at that time. About $400,000 has been spent already on a long bout of planning with architect EDM and on payments so far to Gilbane and QA&M, leaving about $4.73 in the appropriation. Clearly more money was needed, and current efforts have been directed at determining how much. Sangiovannni added that he had little confidence in the contractors, and he thought the data they provided was confusing. The data was clarified later.

Recent meetings of the PBC have concentrated on detailed elements of the planned renovation: deciding which are essential, which would be needed for a really good result, and which might be regarded by some folks as frills. It turned out that the contemplated handicapped entrance ramp in front was not included in the Gilbane estimate, nor was the inclusion of curtain drains across the uphill sides of the building, which are needed to mitigate its basement water problem. Both of these and certain other improvements are now judged essential. Cornice moldings in the main lobby were among items judged desirable but non-essential. Some decisions were especially hard to make: on February 6 the PBC judged fire suppression sprinklers to be a worthy inclusion, but they were argued again on February 13 in a well-attended PBC meeting. That meeting included First Selectman Mack along with occasional attendee Building Official Ted Flanders, regular attendee Facilities Director Chris Matejek, and Jack Muska, retired Public Works Director and frequent contractor overseeing selected Town projects. Two other selectmen were present as spectators. Also participating were the three key representatives from QA&M and Gilbane, who had some difficulty explaining the big jump in the January cost estimate.

After considerable discussion at the February 13 meeting, First Selectman Mack, using data Chairman Sangiovanni had assembled, said she would use $6.36 million as the new cost estimate for determining what additional funds must be sought. She added that $1 million for the project can come from funds that were appropriated for other projects but are now available, such as the McAlister Intermediate School roof repair, which was completed under budget. She was happy to report that the market for issuing bonds is still very favorable. The issue of timing the bid requests, relative to this year’s construction season, however, is still critical.

In the public comment section of that PBC meeting, Kevin Sullivan asked how much of the Town staff will be accommodated by the renovated building. First Selectman Mack said everyone but three – two from Public Works and the Town Engineer. Understandingly, she didn’t bother mentioning Parks & Rec, which now has its own small building.

Next Article
Coronavirus Information
As we continue to monitor the spread of the 2019 Novel Coronavirus,…