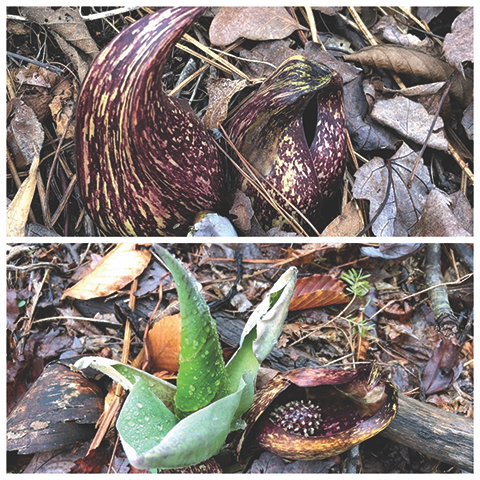 Skunk cabbage assumes many forms as it grows in Suffield's wetlands.

Back in the summer when I was 18, my parents were really cramping my style. I couldn’t wait to cut the apron strings and head off to college. They were spoiling my relaxation vibe with things like summer jobs, curfews and chores I was supposed to do around the house. So after we packed up the station wagon and pulled into my dorm parking lot one late August afternoon, like Sherpas, they unloaded my stuff and beat a hasty retreat. I was pretty happy about that as I was planning on reinventing myself and lurking parents were not part of that picture. But, after 48 hours of orientation, bedtime in the wee hours, flossing my teeth with a whole floor of kids I hardly knew, my disposition was in a downward spiral. And, to my absolute horror and not in keeping with my new image, homesickness crept in. I’m pretty sure my parents were clueless about that since we had no phones in our room, and I’d be darned to be a weeping mess on the hall phone in front of all my new friends. Fortunately, this would pass pretty quickly, thanks to my three-tiered cure for homesickness. First, I met a soul mate down the hall who was smart and funny and quick-witted. She had been around the block which only elevated her status in my mind. Second, I discovered (with her help) that there was a triple of dreamy boys living right below us. The fact that they played “Frampton Comes Alive” on full blast at all hours only added to their appeal. And last, I enrolled in my intro to ecology class and came face to face with a professor extraordinaire. He was hip and energetic and practiced what he preached about protecting the earth. He wore wellie boots, drove a rust bucket of a car, only used a hand push mower and recycled before it was chic. On our first lab class he toddled us down to the arboretum and into the wetlands. My equilibrium was restored and any homesickness was a thing of the past.

I remember that professor more than any other. In college I had planned my whole schedule around his classes, queued up to register for them and would never dream of missing one no matter how late I was out the night before. He is with me although his earthly journey is over. Somehow I pull tidbits of his lectures from the depths of my brain, especially when I am out roaming the swamps around town. He taught us to wield our hand lens as we set off, and soon we added plant presses to our list of “must have” stuff in our back packs. Spring semester in botany class he took us back to the wetlands where we would study the marsh marigolds and skunk cabbage. He showed us how the flowers appeared before the leaves and told us that skunk cabbage could generate its own heat thus helping it to push forward so early in the spring. The cabbage has a hood like leaf known as a spathe which surrounds a structure called a spadix. Together they look like some racy diagram from a human anatomy class. Skunk cabbage is known for its strong odor which really attracts the insects who like the smell of rotten stuff and happily pollinate it. That professor stopped and had us all breathe it in somehow making the strong smell of skunk cabbage seem like an acquired taste we had finally mastered. And, my professor’s appeal was more global as he made us all aspire to be better citizens of this beautiful planet. Thus, as the 50th anniversary of Earth Day is upon us, I seek out my trail mates who, like my professor, inspire in their day to day choices. Some shower with a bucket to catch the extra water and hang their plastic baggies out on the line to dry and reuse, others favor reusable bags and silicone food covers in the war against plastic. They buy in bulk to minimize packaging. Even some former students renewed my faith in humanity as they reached for their snacks mid-morning only to find their “ants on a log” packed in an old jelly jar. It warmed my heart. So, on Earth Day, I may hoof it down the street and pick up an assortment of nip bottles and styrofoam cups that are strewn from cars. It doesn’t seem like much, and I could do way more but at least it’s a start. When I do so you can bet I’ll be thinking of my professor and days when life seemed simpler and more laced with optimism. Maybe I’ll find some dreamy guy to turn up the stereo while I’m at it!

Next Article
Food for Thought
“Today is April Fools’ Day. Believe nothing, trust no one - just…