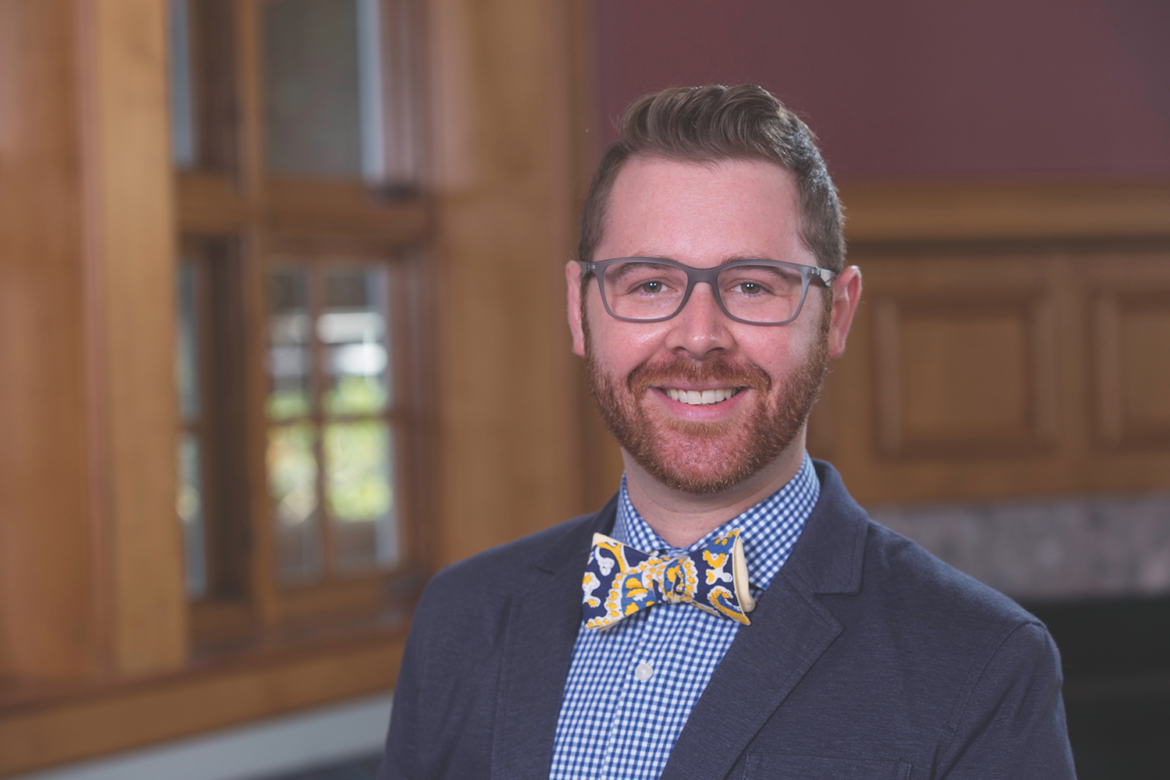 Photo provided by the subject

Garrett Pinder is pictured in the Hatch Learning Commons at Bay Path University.

It is no surprise to anyone in Suffield to read that our library has suffered extraordinary tumult in the last few years, with much repair work and many code requirements needing to be met and less than stellar temporary accommodations during the interim. We all rejoiced when it reopened last summer, its beautiful new Mary Anne Zak entrance offering much-needed handicapped access. The original building, with the addition, has provided if not exactly a new life–since many of its original challenges still exist–but certainly a renewed energy.

Into this milieu has stepped even more energy, this time in the person of Garrett Pinder, our newly appointed Head Librarian. Garrett grew up in the Bahamas; he is a transplanted New Englander, though he attended both secondary school and college in Virginia. At the University of Richmond he majored in studio art with an emphasis on photography, and minored in art history. He had thoughts of becoming a museum administrator. However, on advice from a librarian in the college library where he worked, he turned his sights on library administration.

At Simmons College he earned a master’s degree in library science while working full time for Verizon Wireless. After graduate school he joined the staff of the Jones Library in Amherst as their young adult coordinator, and later accepted a position at Bay Path University as an access services librarian. Not content to pursue just one career, he promptly enrolled in a further course of study entitled “Creative Non-Fiction,” which will ultimately lead to yet another master’s degree. Garrett arrived in Suffield in the spring of 2018, and felt immediately at home. He points out that the library staff is an unusually dedicated group, one with low turnover, and one that has developed a family-like culture over the years. He was encouraged by his colleagues to apply for the position, and their support was pivotal in his decision.

I met with Garrett about half an hour after he arrived at work on his first day, with his new title still unfamiliar even to him. Although he realizes that a new Head Librarian has to take time to learn the ropes of the position before leaping into new projects, it is clear that lots of ideas are buzzing in his head. On his desk was a stack of notes and plans; he must have had a busy weekend! Nevertheless, he has a mixture of eagerness combined with moderation as he faces the challenges ahead. And, he has visible affection for his profession, which he senses has unexplored possibilities as libraries in general develop and change with the changing times. “A library serves everyone,” he said, and he sees many routes toward such a goal.

Garrett’s positive outlook on the future of libraries was a joy to hear, particularly because his opinions are data-driven; for example, he mentioned that libraries are being reinvigorated, and that nation-wide their print circulation is increasing. Who knew? On the other hand, he notes that Kent Memorial Library is a community center, and given the demise of our ambitious plans for the Bridge Street School, the library is apt to have even greater demands on its space and other resources than in the past. Balancing those demands will be a challenge, since many outside groups already use the library for their meetings, and the number is likely to grow. It will be important for the library to coordinate with other town functions if the effort is to continue to be successful and Suffield’s families continue to be well served.

This town, beloved to all of us, is often considered a bit staid, a bit conservative in the broad sense of that term, perhaps even a bit averse to change. Well, now we have a young man in an important leadership position who is anything but staid. Aren’t we lucky that he didn’t decide to become a museum director?