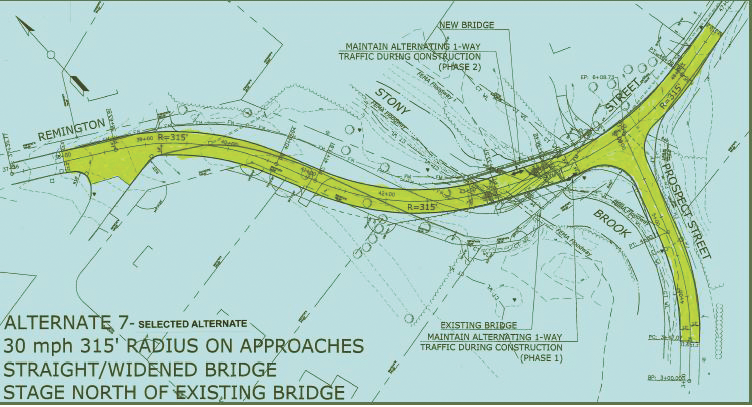 This excerpt from a construction drawing shows that the new Remington Street Bridge (center right) will be longer and exit onto a much less severe curve than the current bridge. In this drawing, the old bridge is barely visible next to the new one.

For several years, the bridge that carries Remington Street over Stony Brook has been considered by the State to be functionally obsolete. It was not structurally inadequate, but by modern standards it seemed too narrow and requiring too sharp a curve in the west side approach.

The bridge has an interesting history, as it was constructed without a special appropriation about 40 years ago when First Selectman Earl Waterman, serving as supervisor of the Town Highway Department, chose to save money by having his crew set four large box culverts in the brook, side by side, each staggered a bit to accommodate his new bridge’s skewed alignment over the brook. The three spots where the culverts met created three piers, which were troublesome when tree limbs and other debris lodged against them, causing some upstream flooding during high brook flow. But for many years, Town crews cleared the blockages and the bridge survived increasing complaints about its width and poor visibility around the curve.

Last year, a new bridge was designed by Cardinal Engineering Associates of Meriden under Town Engineer Gerry Turbet’s supervision, and construction bids were requested in November. Five contractors responded, with bids ranging from $3.8 to $4.9 million. Low bidder Arborio Construction of Cromwell was given the job, with the cost largely supported by a State grant. A few items were delivered near the end of February, and work began on March 2.

Though the new bridge will slightly overlap the old one at its west end, plans call for traffic to continue, with single-lane use on the old bridge, then the new bridge, controlled by signalmen or traffic lights. Motorists are advised to seek other routes to avoid congestion.

The new bridge will be aligned about 30 degrees clockwise from the old one, with its east end somewhat overlapping the east end of the old. (East is toward South Street.) Because of the increased skew, the new bridge will be 100 feet long, more than twice the old one. It will accommodate two full 14-foot travelways, plus a 5-foot sidewalk. The new alignment will drastically broaden the curve on the west side, changing the radius of curvature from about 60 feet to 315 feet. In addition, the new bridge will be about four feet higher than the old, with increased clearance underneath. Its structure will comprise six wide-flanged, pre-stressed, reinforced concrete I-beams.

In the first two weeks of March, cofferdams were installed in the brook for building the western abutments. The schedule calls for the bridge to be complete by the end of October, possibly overlapping into November.