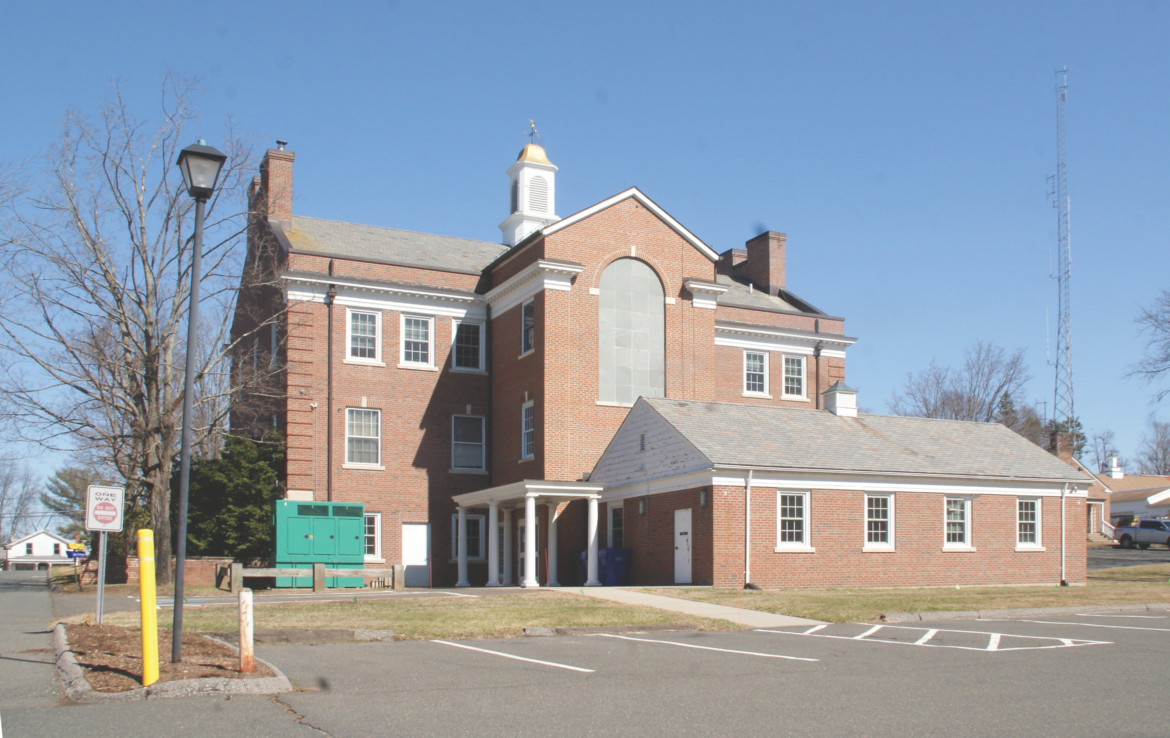 Viewed from the southwest, the lower level door of the Town Hall will not change much in the planned renovation, but the new exterior exit and stairway from the new main floor meeting room will show on the west side (left), and a new town records vault will be added to the south side of the original police station garage, which has later served many other uses.

The manner of financing the planned renovations to the Suffield Town Hall has been under study by the Town administration. As reported in last month’s issue, part of the $5.13 million voted by the Town in 2015 has been spent in architectural studies and other pre-construction payments. In the years since 2015, estimated costs have risen, and after current value-engineering efforts by the selected architect and contractor, a cost of $6.4 million is being used in planning. First Selectman Melissa Mack has said that $1.0 million of the shortfall can be provided from unexpended authorizations for several completed projects. Plans for the additional funds needed had not been announced by the Observer’s mid-month deadline.

In the meantime, planning for evacuating the building and for the eventual locations of the several Town departments continues, with a few changes from the tentative plans reported in the Observer in February. Still in the building in mid-March are the offices of the First Selectman, Human Resources, and Finance. In addition, the lower level conference room gets regular use. All must leave before the renovation work begins. The location of the “swing space” needed during the renovation has not been announced, but the spaces being considered are at 230C Mountain Road, the present Town Hall Annex next door to the Town Hall, and the Senior Center. (The previous plan for the Finance Department to occupy the former library at the Senior Center seems to have changed.) Even the park superintendent’s house at Sunrise Park has been considered for temporary or permanent office space, now that Superintendent Tom Drakeley has retired.

The possible effect of the current COVID-19 closings and re-schedulings is unknown at press time.

Next Article
Soccer Star Signs for Case Western
In the main corridor at SHS on October 10, soccer star Katie…