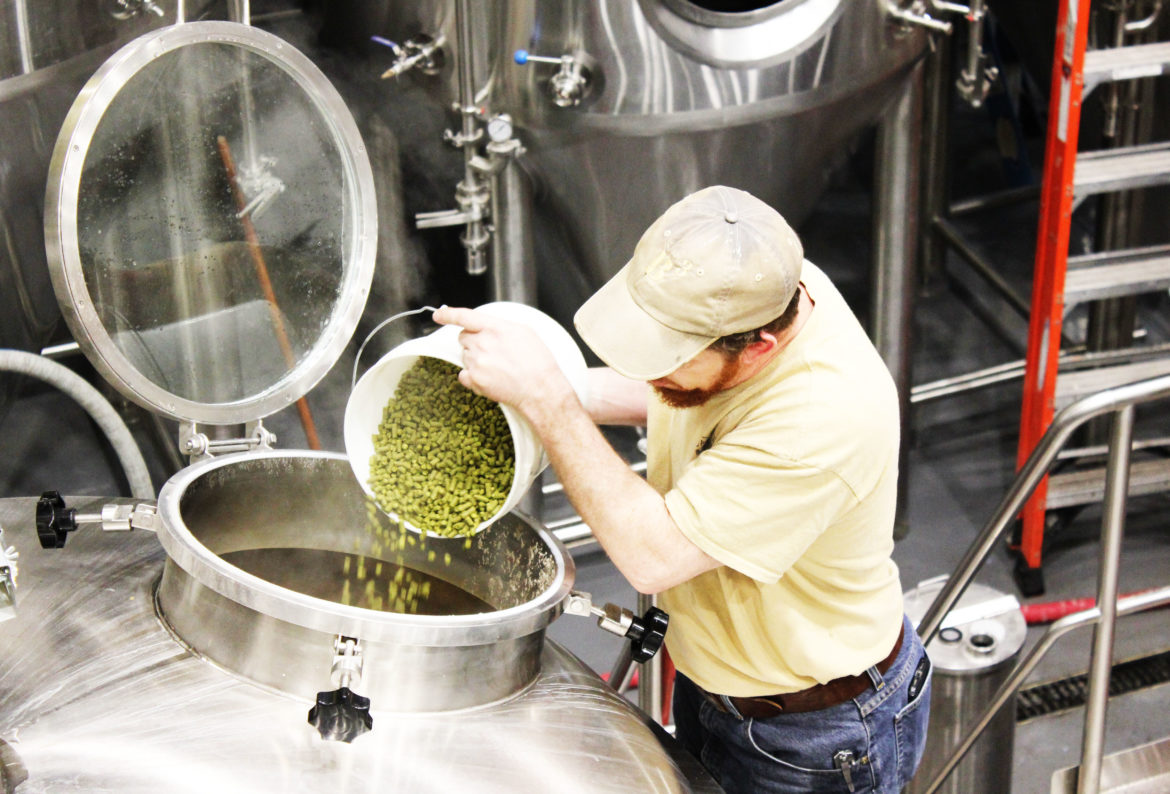 In April, Proprietor Eric Mance pours hops into the boil kettle at the Broad Brook Brewery.

It was in September 2017, when excavation began, and a couple of weeks later that a belated official “groundbreaking” took place.  Before wielding her shovel along with other dignitaries, First Selectman Melissa Mack commented that the Broad Brook Brewery was “exactly the type of economic development we want in Suffield.”  This one took a bit longer than expected, but in late April this year, with all the tanks and plumbing and controls in place, and agreements with the Town settled, brewing actually began.  The kitchen for the brew pub isn’t quite complete, but it was important to get the main function of the operation going. Store sales and on-line ordering have begun, with retail curb-side pick up on weekends.

Construction had hit serious snags, with controversial issues raised by Building Official Ted Flanders and disagreements as to what was to be done about them.  A “Stop Work” order was posted in May 2018, and work ceased for several months.  New structural studies were offered by the proprietors and the Town, resulting in rework that began in the fall that year.  With the structural rework complete and approved, there was still much to do inside, and it was ten months later that the essential brewing tanks and plumbing and electrical controls began to be put together.

An essential business matter had yet to be settled.  The added structural analysis that the Town had hired was costly, and the proprietors agreed to reimburse the Town for the added expense.  The manner of that payment was finally approved by the Board of Selectmen in their April 22 meeting this year.  The proprietors were to pay $50,000, with a down payment of $10,000 and payments of $1,000 a month after the brewery was fully open, with the monthly payments to be renegotiated after six months.  After the selectmen’s unanimous vote to approve the settlement, First Selectman Mack thanked Broad Brook Brewery for investing in Suffield and acknowledged the difficult road it has been to get to this point.  She emphasized how happy the Suffield Community would be once the Brewery is open to the public.