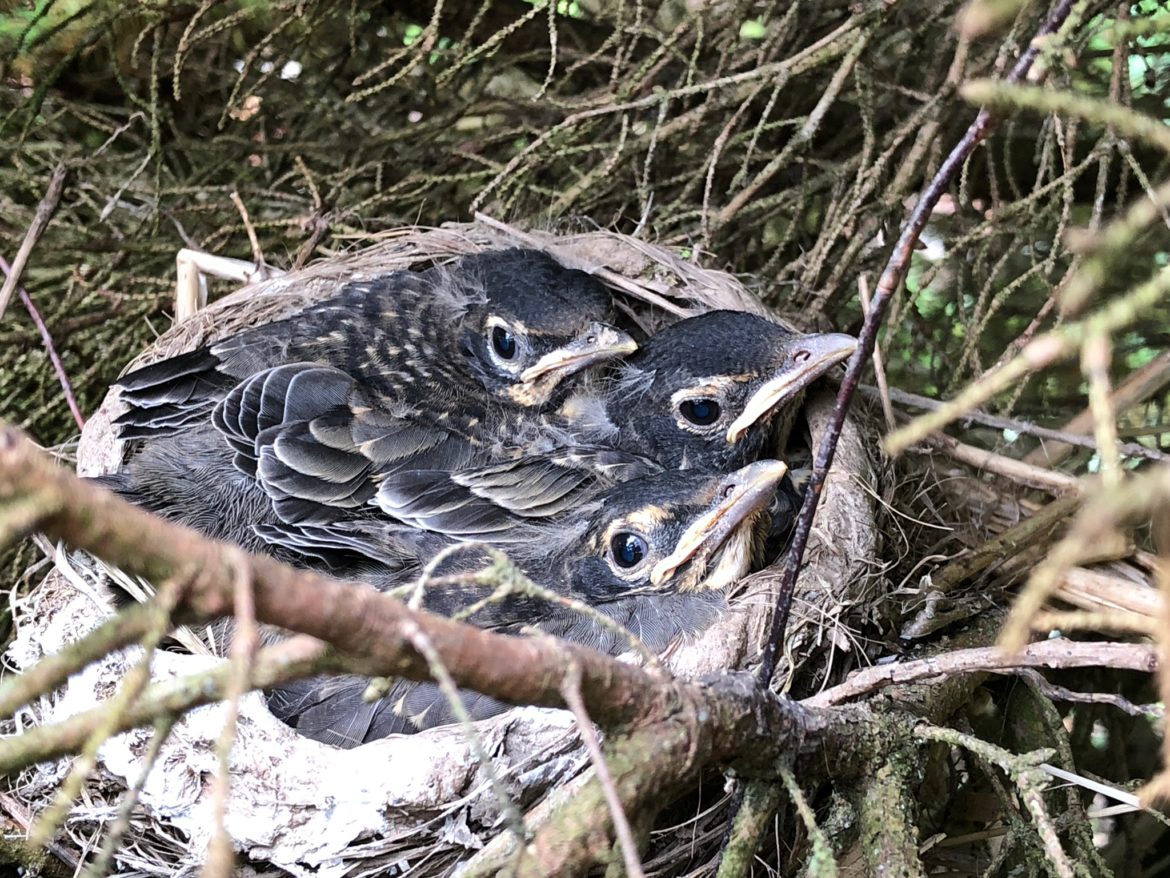 Young robins, soon to fledge, are waiting for their mother to provide their next meal.

Memorization and recitation were kind of a thing back in the day. I recall having committed The Gettysburg Address to memory and The Lion and Albert, among other things.  My mother had countless poems and such that she had memorized and could call forth in the middle of the woods or around the dinner table.  But I think our favorite was her rendition of Horton Hatches the Egg by Dr. Seuss. At least it was on our level.   She captivated us with her retelling of the cranky Mayzie who recruited kind hearted Horton the elephant to sit on her egg so that she could enjoy life. Mayzie had a hankering for some days on Palm Beach and Horton sat, and sat, and sat on the egg through good times and bad. Staying put through good times and bad might seem very familiar with the social distancing we have had this spring.  And of course Mayzie flew back in time for the hatching, but as everybody knows the egg produced a wonderful elephant bird and a happy ending for Horton. It firmed up for us that you shouldn’t shirk your responsibilities, although I sure have tried from time to time.

We all became so enamored with Horton that we pleaded and pleaded with our mom to take us to Forest Park Zoo up in Springfield.   Once we wore her down, it became part of our regular routines, and the old station wagon could drive itself up to Frederick Law Olmstead’s park housing the zoo.   We needed to see for ourselves where Dr. Seuss hatched his ideas since his dad was a zoo keeper there.  So, if my memory serves me, she would set us loose, and we would make a bee line for the concrete buildings which housed the more dramatic animals.  In one building the lions were on one side, pacing which seems heart breaking now.  The large apes were on the other side doing all their primate hijinx much to the horror of my mom.  The building echoed, so even if the lions were panting, it sounded like roars to our young ears. It was sensory overload for all of us, terrifying and fascinating all in the same moment. We’d head out next to check out the elephant named Morganetta, who seemed very sober. If my memory is holding up, she had one of her legs chained to the floor which pretty much makes me want to dissolve into tears when writing that sentence.  We studied her long eyelashes and flapping ears and thought about Horton waiting on the nest.

Before we knew it, our mom would be rounding us up and back we would head to Suffield.  Once out on our own terra firma, if it happened to be early summer, we would scour the yard for nests which were not abandoned by that shirker, Mayzie.  And low and behold, we would always be able to find one, usually full of robins, with their gaping mouths. So now the nest would be fully on our radar, checked on tiptoes multiple times a day.  And, in what seemed like the blink of an eye, the birds would be feathered and ready to fledge.  That meant just one thing for the four of us.  To drown our sorrows about our baby birds leaving the nest, we would need another trip to Forest Park to take our mind off of that empty feeling.  Fortunately, our mom was always game.

Next Article
June Highlights
Even the birds are sheltering in place.