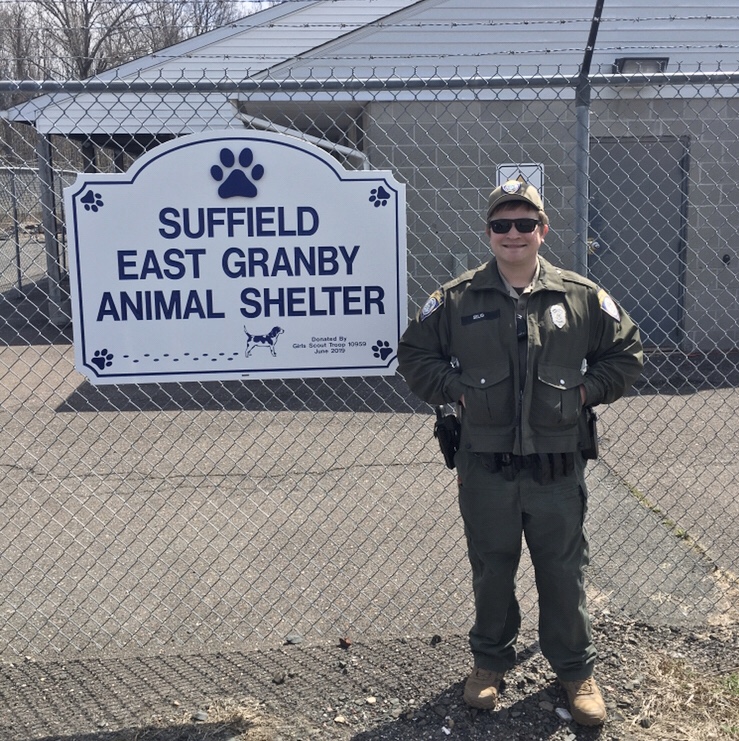 Animal Control is a Public Safety Service managed by the Suffield Police Department, and shared with East Granby.  Ryan Selig is the sole Animal Control Officer (ACO) for both communities, manning his post Sunday through Thursday, 9 a.m. to 5 p.m.  He handles everything from sick/injured animals, animal bite investigations, animal cruelty investigations and wildlife in distress.  When he is off duty, police officers in both communities will typically take a call.  Ryan will then take over when starting his scheduled shift. He will be called in for situations where exigent circumstances necessitate further investigation, such as animal cruelty.

Suffield does have an Animal Shelter on Ffyler Place, but it is currently out of commission due to furnace issues. In the interim, River Valley Animal Center on South Street in Suffield is used for any impounded animals.  In the 2018-2019 year, there were roughly 100 animals (dogs, cats, livestock, poultry, etc.) impounded between both towns.  When calls in either community involve prompt veterinary care, the closest facility is used to ensure the animals have the best chance of recovery.  The animal’s owner is statutorily responsible for handling the bill for care provided to their animal while it was in the town’s custody.

When wildlife are in distress or injured, Ryan transports them to either a wildlife veterinarian (such as Suffield Veterinary Hospital) or a wildlife rehab facility.  He often gets to handle the release of the animals back into their habitat after they recover, something done about a year ago with a Barred Owl https://www.facebook.com/SuffieldAnimalControl/videos/354401065339894/.  Homeowners experiencing issues with wildlife can ask Ryan for techniques to prevent wildlife from seeking residence (sealing off entry points after determining there is no wildlife presence, giving advice on chimney caps, trimming branches close to the home).

Part of the ACO job is to provide public education for the community.  For example, Ryan delivered a seminar on dog bite prevention for the Suffield and East Granby USPS mail carriers.  UPS and Fedex have shown an interest in holding a similar session.  He also gave a presentation at the Suffield Regional Agriscience Center where topics included biodiversity, carrying capacity of wildlife, and the ACO role in wildlife management and diseases presented from wildlife.

Suffield and East Granby started sharing Animal Control with the 2013-2014 budget.  Each town pays a percentage based on call volumes.  Suffield has a higher number of calls resulting in our contribution being more than East Granby.  Time between communities varies month to month and year to year, but generally Ryan spends about 65% of his time in Suffield.  Aside from cost sharing, both towns benefit from an officer who receives continuing training and has the right tools for the job including a specialized vehicle.  The Animal Control vehicle rear seating is affixed to fit canines and wildlife rather than people, and the trunk is designed for canine control and wildlife handling equipment (catch poles, snake tongs, nets, etc.).

For answers on animal safety with the current Coronavirus pandemic, Ryan refers to the Centers For Disease Control and Prevention (CDC) website at https://www.cdc.gov/coronavirus/2019-ncov/daily-life-coping/animals.html for the most current information.  He, like the CDC, does recommend avoiding interactions with other pets or people outside the house.  If there has been an interaction, consider shampooing your pet after performing your regular tick check and, of course, wash your hands.

When asked about the most rewarding part of the ACO job, Ryan’s answer is no surprise.  It’s knowing the improvements he makes to the quality of an animal’s life.  Check out and “Like” Suffield Animal Control’s Facebook page at https://www.facebook.com/SuffieldAnimalControl/.

Next Article
Get A Digital Library Card
Kent Memorial Library is now offering e-cards! If you don’t have a…