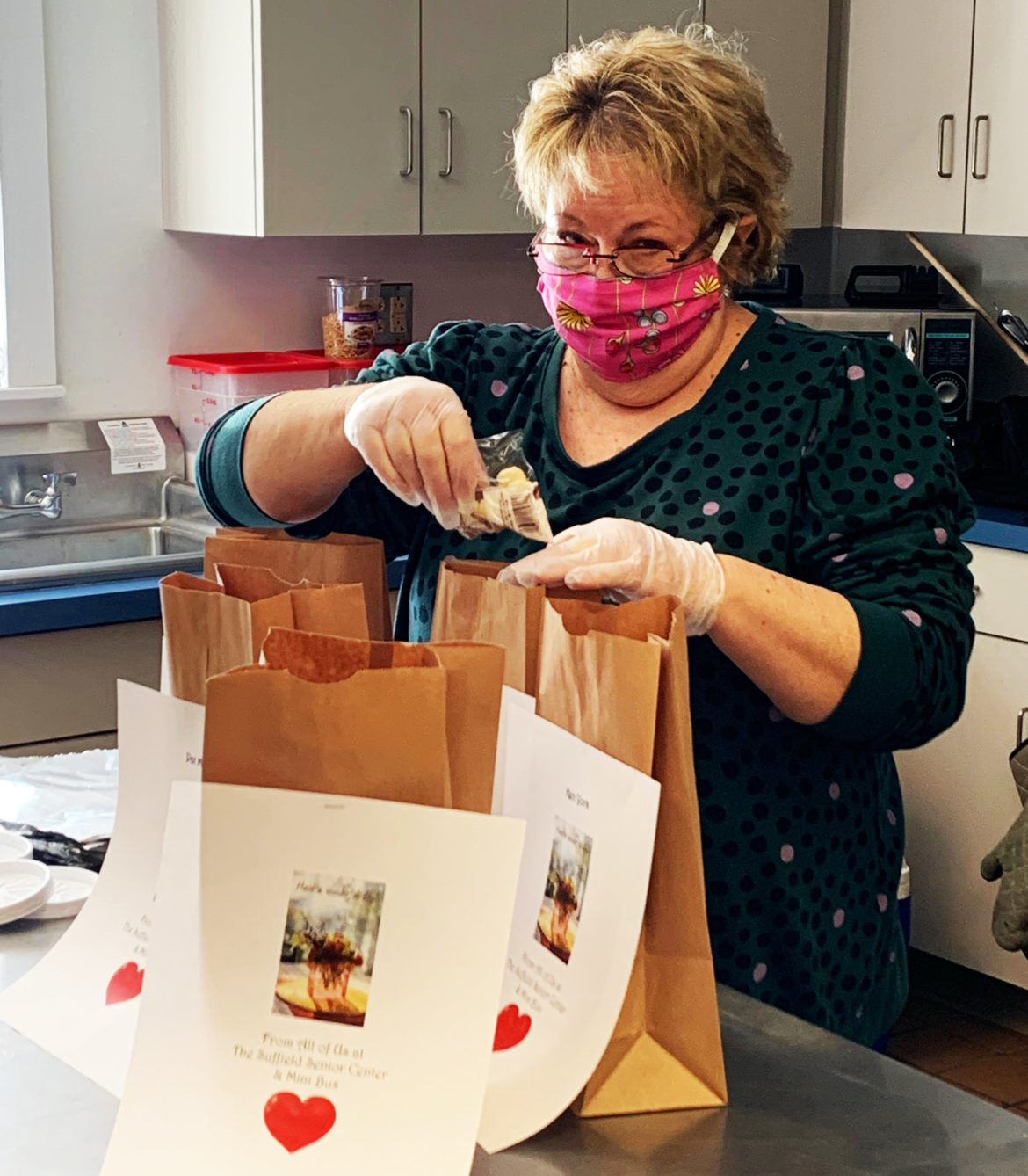 MaryLou Brewster, assistant to Director Paula Pascoe, fills one of the food bags being prepared by the Suffield Senior Center now that the usual crowd cannot gather for their regular lunches. The Senior Center’s grab-and-go plan is one of the several food programs in town that have adapted to the new rules responding to the viral emergency.

Among the many ways help is being offered to folks in town troubled by the many businesses closed and the widespread shelter-in-place practice, meals are a key matter.  At least three great programs were quickly established in Suffield.

The school system realized the new burden on families with children no longer having lunch in school cafeterias, along with those who often included breakfast at school, too.  So the Grab-and-Go breakfast and lunch program was announced by Superintendent Van Tassel, generously offering meals at no charge to all students, as well as to anyone else in a student’s household under 18.  Meals are provided for seven days a week, but they must be picked up at four strategically established pick-up spots on Mondays, Wednesdays, and Fridays.  The students of families who have registered for meals do not need to be present for the pick-ups.

The Meals-on-Wheels program of Suffield Community Aid was seriously affected when the Community Renewal Team in Hartford could no longer provide the meals, but Director Janet Frechette and her crew are preparing packages from the SCA food shelf for registered families who need them.  Some families are able to come for pick-up at SCA headquarters on South Street.  For those who can’t, SCA staff members are making deliveries, as the regular volunteers who have in the past delivered meals weekly cannot be involved now.

And the Suffield Senior Center’s regular lunch program could no longer allow registered seniors to gather for lunch in the Center on Bridge Street.  So grab-and-go lunches are now being prepared at the Center – here, too, only by staff members – for pick-up at a table outside the front door by those who have signed up for them.

Beyond these programs by Town and quasi-Town organizations, many individual acts of kindness are common, especially with regard to groceries and meals.  And this superannuated reporter is certainly grateful for having received such help.

Next Article
Drive-by Parades Hit the Spot!
While adults in our community have alternated recently between worry over the…