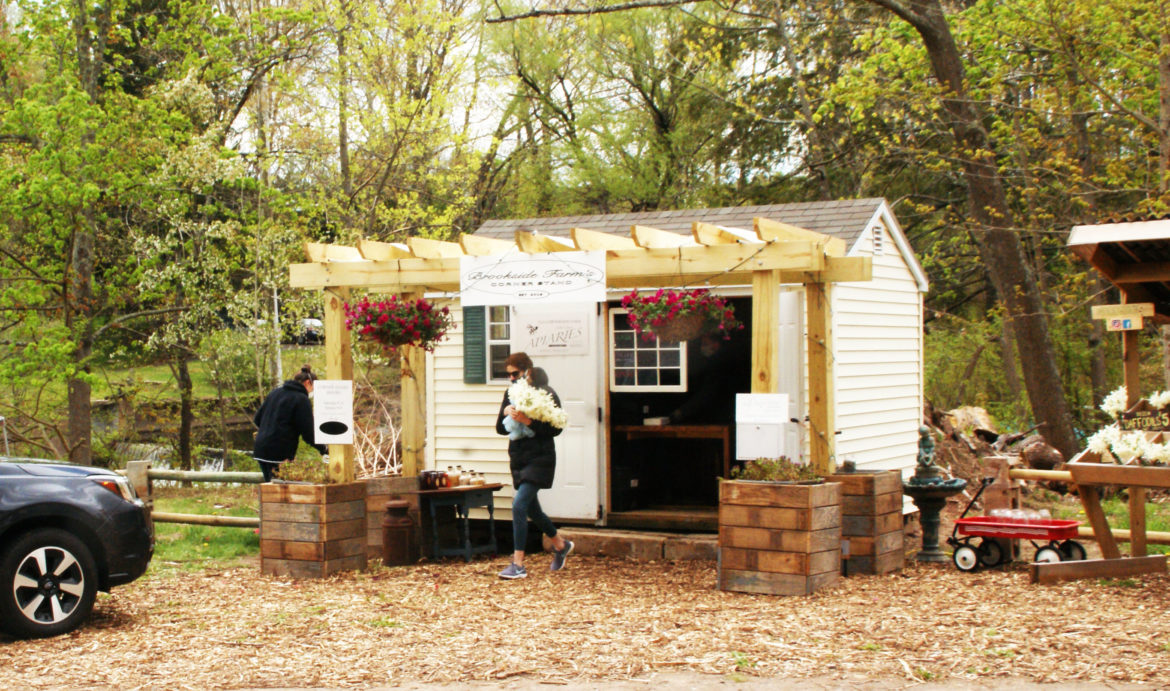 A recent Sunday morning customer carries a big armload of daffodils to her car from the new farm stand at Brookside. Water cascading over the Boston Neck dam can be seen in the photo, beyond the fence in front of the car.

On Boston Neck Road next to the dam and the bridge over Stony Brook, the condition of Brookside, the neglected mansion there, has made a turn for the better.  Residents of the neighborhood and those who just drive by have seen evidence of the positive trend, most noticeable recently in the new clapboards on the large, round dining room extension on the left side.  Alyssa Bryll, one of the five grandchildren of the late Mitchell and Dolly Bryll, reported that the clapboards were soaked in Schwartz Pond to make them bendable for the application.  The work has been slow, but the trend is clearly positive, and the grandchildren have positive dreams for the home and its farm.

The newest change is the addition of a farm stand building and display rack in the space between the home and the bridge.  The stand has been open weekends recently, selling flowers grown in the farm’s garden beds.  Soon the bins in the display rack will offer home-grown vegetables. The Brookside Farm Corner Stand is open on Saturdays and Sundays from 10 to 4.

The Boston Neck Dam neighborhood, with its rich legacy of mills on both sides of the brook and interesting old homes, as well as the Schwartz family’s grand style in Brookside at the end of the 19th century and the first half of the 20th, occupies a unique niche in Suffield history.  This historian reporter hopes to see the mansion looking great again.