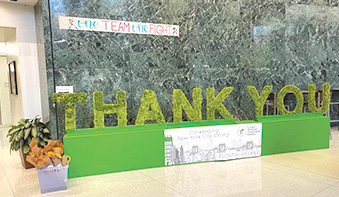 Photo provided by the Loiseau family

The floral designers’ 10,000 kiwi pomps thank-you as it appeared in the Mt. Sinai West lobby.

When the COVID-19 pandemic hit New York in March and large gatherings and special events came to a screeching halt, so too did Ruth Loiseau’s floral design business. But Loiseau, a Master Floral Designer, wasn’t sidelined for long. Rather than sit idly by, she and daughter Alexandra Bromson, who work together in Flower for the People, a third-generation family floral business, developed DIY flower kits which sold nationally on the internet.

Although all proceeds from the kits were donated to COVID relief, the pair wanted to do something more to show their appreciation to healthcare workers in New York City where one of their two studios is located (the other is in Suffield). They came up with the idea of putting flowers on a giant thank-you to hospital workers. Loiseau called her son, Christopher Bromson, who is executive director of the Crime Victims Treatment Center (CTVT) which serves New York City communities, and shared her idea. CTVT then teamed up with Flower for the People to share their mutual gratitude for health care workers at CVTC’s hospital partners Mt. Sinai West and Mt. Sinai Morningside.

To do the tribute, Loiseau and her daughter worked three 14-hour days hand gluing 10,000 kiwi pomps onto large letters spelling out thank you. In order to surprise workers at the 7 a.m. shift change, the two women left home at 4 a.m. to set up the greeting along with brown paper wrapped individual floral bouquets for the workers to take home. In total, they did three installations – two at Mt. Sinai West and one at Mt. Sinai Morningside – and all were well received, judging by the smiles on the workers’ faces.

The hospital administration so admired the thank-you that they commissioned a more permanent replica using blue hydrangeas, which is still on display in Mt. Sinai West’s lobby.

Meanwhile, an ABC producer friend of theirs saw the install on social media and sent it to Good Morning America who arranged a remote interview with the women, interspersed with scenes of the installs and the DIY flower kits.

Although Loiseau studied at Hixson School of Floral Design to become a certified Master Floral Designer, she learned her craft working at her mother’s flower shop, Flowers Unlimited, right here in Suffield. She began working with her daughter when Alexandra came to her about six years ago with an idea for a flower magazine. The magazine highlights their floral projects as well as other designers’ projects across floral design, interior design, art and fashion. The digital publication ended up evolving into a custom installation firm, Flower for the People, which the two started together. In addition, Loiseau owns RuthL which does weddings and similar events, as well as Ruth Organics, which does botanical installs. Bromson, in addition to working with her mother, has a background in clean energy finance and is working to decarbonize the NYC building stock.

Loiseau’s long association with decorating at the White House began with the Reagan administration and came about when Dotty Temple, a friend of her parents from the flower industry, became the White House Head Florist. It had always been her dream to design at the White House, so her mother connected her with Dotty and the rest is history! Although Christmas decorations have been a staple for her through the years, Loiseau has done additional high-profile events and dinners at the White House, including the dinner for Princess Diana and Prince Charles. She reports that designing at the White House is very regimented and planned exclusively by the First Lady and Head Florist. This is in contrast to her wedding and installation business where she is able to be more creative.

With so many installations under their belt, it is difficult to choose favorites, but a huge wedding at Ocean House in Rhode Island, which was absolutely “gorgeous,” and a design for the launch of a new Audi series at their headquarters in Virginia come to mind. For the Audi launch, thousands of flowers were used on and around the car as well as on a massive 8 x 12-foot moss and rose wall.

While the women have temporarily suspended the DIY flower kits due to the availability of flowers from one’s own garden, they will be reintroducing them in the fall; they can be ordered by messaging Flower for the People on Instagram. The complete kits range from $35 to $55 and include a video on how to arrange the flowers.

Next Article
EMT’s Discharge A Welcome Recovery
On July 1, John Ryan, an EMT with Suffield Ambulance, was released…