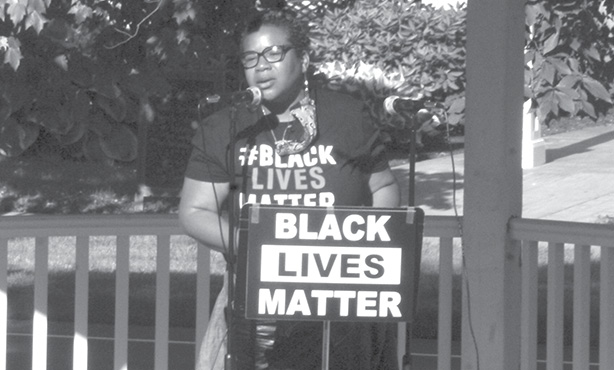 Keren Prescott of PowerUp Manchester was the principal speaker at the well-attended Black Lives Matter rally on the Green on June 17. Her impassioned 25-minute speech brought a standing ovation from the crowd.

From a need to respond to the current crisis of racism and police brutality against Black people in America, a new social justice group now known as ABAR Suffield has emerged.

We are a group of Suffield citizens, who in partnership with social justice activists from the greater Hartford-Springfield area, seek to create a world free of implicit bias and racism. We initially came together to organize a Black Lives Matter rally in Suffield in the wake of the murders of George Floyd, Amaud Arbery, and Breona Taylor, and have since evolved into a group committed to making Suffield a more inclusive and welcoming town truly committed to liberty and justice for all.

ABAR is an acronym for anti-biased/antiRacist. The term emerged among educators, who say that ABAR “education supports all children’s full development in our multiracial, multilingual, multicultural world and gives them the tools to stand up to prejudice, stereotyping, bias, and eventually to institutional ‘isms’.”

We adopted the term because it embodies the spirit of what we hope to achieve: a Suffield that is free of bias and racism, where all our diverse community members thrive and grow together.

As a town that prides itself on being a “good community,” we need to stop asking for proof and recognize that racism is present. To make this an “us” issue – ALL of US together working to learn and grow together, ultimately enabling greater freedom and justice to emerge.

How is this achieved?

Nationally, the movement for justice has gained tremendous momentum since the end of May. And nationally, there’s a sharp focus on police brutality, increasing police accountability, and calls to defund the police.

We believe that while Suffield’s challenges may differ from those in the national spotlight, they are nevertheless significant and need to be addressed with a sense of committed urgency. We see opportunities to develop greater awareness of diversity, the challenges of living in a world where most things center whiteness, and how we can all participate in shifting dynamics to create greater equity in our schools, our government and our community as a whole.

To that end, we’ve been meeting with various leaders in town including First Selectwoman, Melissa Mack, Suffield Public Schools Superintendent Tim Van Tasel and Assistant Superintendent Michelle Ziwawi, Kent Memorial Library director Garrett Pinder, the Board of Selectmen, the Board of Education, and the Police Commission. Our ask of each is to:

If you’re interested in learning more about ABAR Suffield or contributing to our efforts, we have a Facebook group of the same name, and you will find us all there every day.