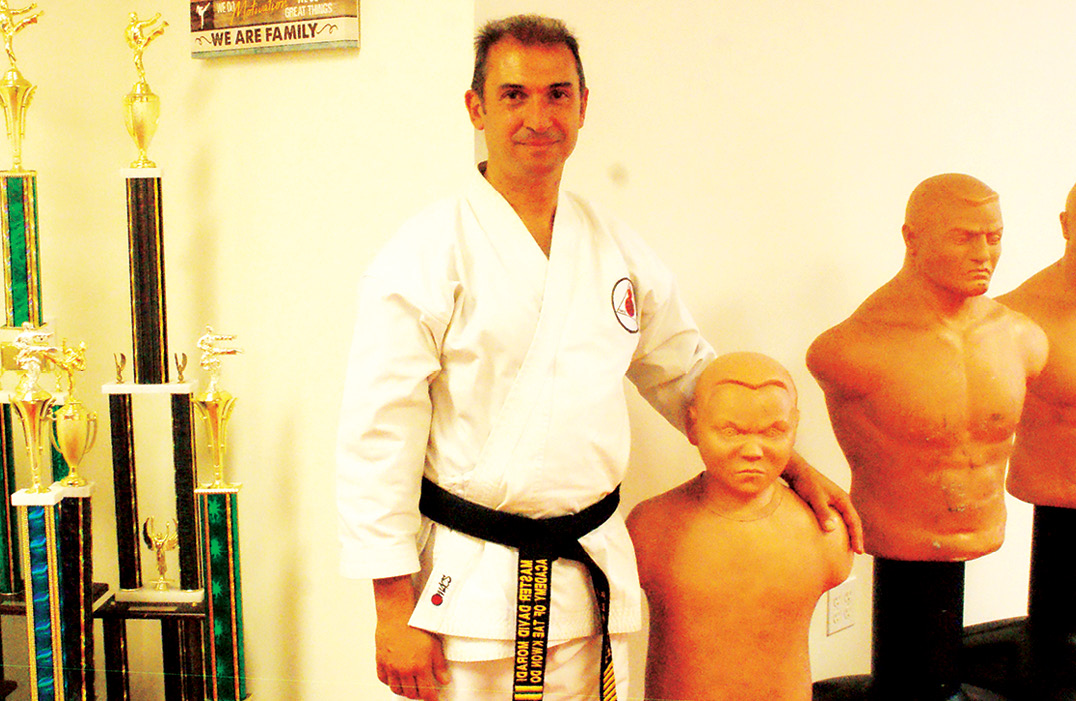 Tae Kwon Do master David Moradi is pictured next to “Bob” in his new training academy in Suffield Village. The kick target training aid is one of several in the studio, all named Bob.

New Yorker David Moradi, a 6th degree black belt Tae Kwon Do master, has been teaching martial arts for 16 years and has now opened his second studio. The Suffield Tae Kwon Do Academy is located on the ground floor of Suffield Village at the foot of the main stairway by the center’s north side entrance. (It’s the new, across-the-hall neighbor of The Suffield Observer.) The academy is scheduling private one-on-one classes this summer at regular group rates.

This Korean form of martial arts, derived from the Okinawa-Japanese traditional karate, grew after World War II, adding certain new skills to the hand and foot moves of karate. The words of the name mean “Foot – Fist – Method.” While three ornate swords are exhibited in the studio, they are only decorative, as sword play is not part of Tae Kwon Do.

Proprietor Moradi says that he has been a passionate enthusiast in martial arts since he was a child growing up in the New York City area. After graduating from college, he held several office jobs, but continued his training in Tae Kwon Do. In 2003, he decided to switch careers and opened a martial arts studio. After 16 years, he contemplated expanding to a second location and studied various possibilities, eventually choosing Suffield. Suffield’s new entrepreneur now lives about midway between his two academies; he has engaged several experienced, award-winning, black belt trainers to help here. Contact him at 914-817-3710.

Next Article
Tree Climbing
Look closely. This climber from Ricky’s Tree Service has worked his way…