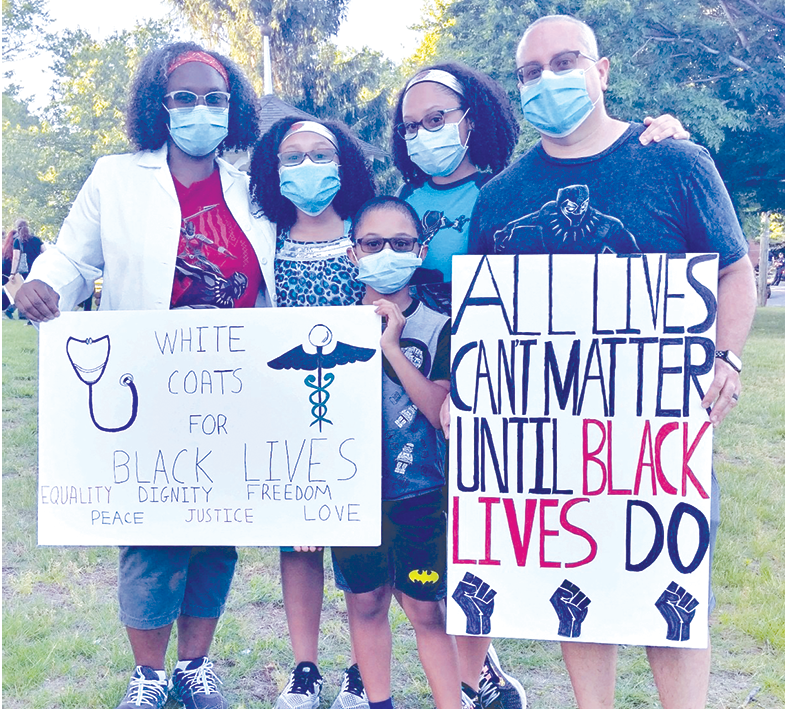 Suffield High School freshman Christina Vega and her fmaily participated in the Black Lives Matter rally held on the Suffield Green on June 17. From the left: Christina’s mother, Dr. Cassandre Victor-Vega, her sister, Eliana; her brother, Elias, Christina and her father, Jerry Vega.

My name is Christina Vega. I am Afro-Latina, and I am so proud. But as a half Black individual, I am scared. I’m scared to go outside and have assumptions made about me, harmful assumptions, sometimes fatal assumptions. Inequality exists, and Black America suffers because of it. My brothers and sisters are hurting, even dying because of the injustices of this country. I shouldn’t have to fear the police, the people whose duty it is to protect us. I shouldn’t have to be afraid because of my skin color, the very thing that makes me who I am.

Now, you may be thinking, you aren’t even completely Black, so what do you care? Well, my mother is Black. Half my family is Black. When I watch the news and hear that someone of color has been shot or hurt, for absolutely no reason, that hits a little too close to home. It serves as a reminder that any of my aunts, uncles, or cousins, could have been in their place, and they could be the ones dead instead. While your race is something that makes you who you are, it doesn’t define you. When you’re Black, suddenly this changes. When the police see you, they don’t see your accomplishments, your personality, or any good things you’ve done. They just see your skin. And that’s when fear takes hold.

There is a Star Wars quote that says, “Fear leads to anger, anger leads to hate, and hate leads to suffering.” While this quote may not seem like it relates to this topic, it truly does.

We are not born racist. We don’t come out of the womb angry and hateful towards a specific race. Racism is learned. People fear what they do not understand, or they fear those who don’t look like them. Over time, that fear will turn to anger at people of color, and when that anger builds up, hateful things happen. That’s when the suffering starts. These hateful actions, whether harming a person of color, or outright causing their life to end, lead to even more suffering. This especially relates to the protests happening across the nation. At first, people of color, people like me, were afraid. Afraid that this could happen to us, happen to one of our loved ones. But quickly, that fear gave into anger. That anger led to protests, led to people wanting change, and standing against violence towards people of color. That anger quickly turned to hate, with violent riots breaking out. The riots have hurt many people. We are trapped in a vicious cycle, one that we have been trapped in for years, and one that I’m not quite sure we can correct.

The video of George Floyd’s death was an experience that people of color face too often. The death of Mr. Floyd lit a match that started a raging flame, one that drew attention to the struggles that Black Americans face on a daily basis and proved once again that we refuse to be silenced.

I’m tired of living in fear. Tired of watching my community get slaughtered for doing absolutely nothing. The Black Lives Matter movement is rooted in the desire to put an end to racism and violence towards African Americans. When I say, “Black Lives Matter,” that doesn’t mean that your life isn’t important. It means, Black lives matter, too. My life shouldn’t be considered less than yours. You cannot say that “All Lives Matter,” until Black lives do.

If you’re not a person of color, maybe racism doesn’t mean as much to you, but if you claim to be our allies, you have to always be our allies. You don’t get to say Black Lives Matter when it’s convenient. It is a constant movement, a fight against injustice and a fight for equality. It isn’t enough to just not be racist, you have to be anti-racist.

While I know we shouldn’t live in fear, it’s hard in a country like this. A country so full of hate, and anger and violence towards people who look like me. A country so blind to our struggles that years, decades, of a peaceful movement got less attention than the riots led in outrage and sorrow did. It’s disappointing to see that a country so ingrained in violence will only pay attention to violence.

Fifty-seven years ago, Dr. Martin Luther King Jr. announced to the world that he had a dream, one that would unite the country, allowing us all to look beyond race, and step away from the violence towards African Americans. Imagine how disappointed Dr. King would be if he could see the kind of America we live in, one that has strayed so far from his dream, one that has somehow, gotten even worse. ζ