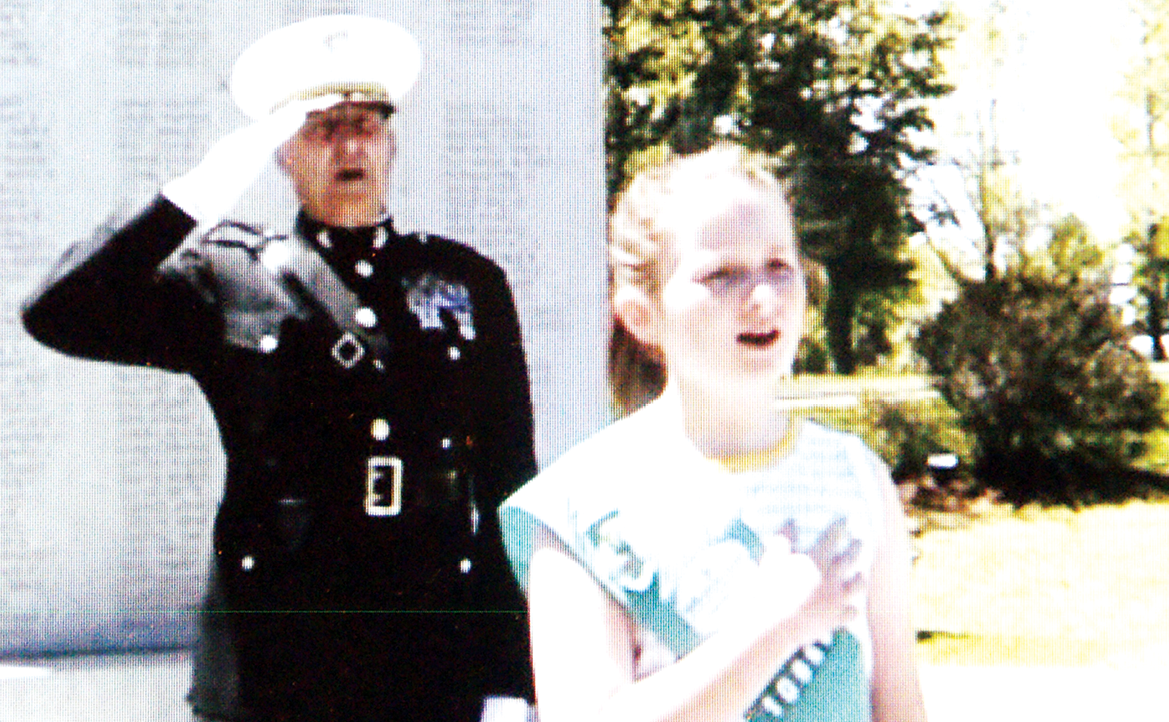 Lt. Col. William Moryto, USMC, Ret., salutes as Amelia Shanks recites the Pledge of Allegiance during the Town’s video observance of Memorial Day, released at 9:00 on Memorial Day morning, May 25.

Because of the pandemic restrictions, Suffield was unable to hold our conventional Memorial Day service on Veterans Park, but First Selectman Melissa Mack was determined not to let the day go unobserved. So she arranged for the Town to produce a virtual service. It was recorded by Brady Mitzel, a 2016 SHS graduate now a film student in Maryland, with help from Mack’s Administrative Assistant Kim Worthington and Master of Ceremonies Bill Moryto, Lt. Col. USMC, Ret.

The usual presentations were recorded in two sessions at the Veterans Memorial ahead of time. It was not possible to include the usual band music. The video was post-processed and assembled by Mitzel, with some variation in sequence. It opened directly with Lincoln’s Gettysburg Address, read quite clearly by Michaela Cole.

Then Col. Moryto introduced the program. The Pledge of Allegiance was very well recited by Amelia Shanks, a young Girl Scout of Troop 10966. First Selectman Mack followed, with brisk and meaningful comments on the purpose of the day, including some appropriate but unfamiliar quotes from Presidents Franklin Delano Roosevelt and Abraham Lincoln. She spoke of the spirit of service of those who have died serving their country and said that same spirit motivates all those, in many fields, who are serving now during the pandemic.

“In Flanders Fields,” that lovely poem from WWI, was read by scholar-athlete Nora Shanks, SHS 2020. Then Mallory Mitzel, also SHS 2020, read the “Confession of National Faith.” (My subsequent question to Col. Moryto, asking how that reading seemed so much more suitable than in previous years, revealed that the text had been edited. Bravo.)

Principal speaker Maj. William Duvocq, USMC, Ret., followed, speaking of this special occasion as a solemn day of remembrance for those who have given their lives in sacrifice for their country; he emphasized the importance of that sacrifice to American life. His presentation, though brief, was thoughtful and appropriate.

The strong voice of Dailand Willingham, SHS 2020, with The Star Spangled Banner, was the only music of the service. Rev. Scott Seabury offered a Memorial Day prayer. Then the VFW firing squad fired three rounds, and Taps was sounded as images of names cast in bronze or carved in granite on the Veterans Memorial appeared, featuring those with stars signifying Died in Service. The screen lingered a moment on the names of Cpl. Stephen Bixler, USMC, on his tombstone at Arlington, and ET3C Dustin Doyan, USN, on what might have been a relic from his blasted destroyer, both having died in service too recently for Suffield’s Memorial.

The service closed as Col. Moryto and Maj. Duvocq saluted their fallen comrades, represented by the wreath the two Marines had just placed at the foot of the Veterans Memorial.

Next Article
Town Hall Renovation Costs Lower Than Expected
The Guaranteed Maximum Price for the Town Hall renovations, received in the…