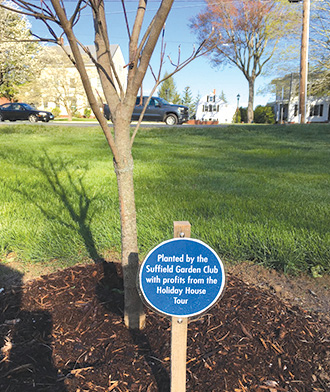 This little tree, planted by the Suffield Garden Club to keep Suffield green, is across from the tip of the North Green.

Do you enjoy statistics? In 2013 the Suffield Garden Club received a grant from the Amiel P. Zak Fund for an inventory of Main Street trees. At that time there were 604 trees surveyed. Today, the number is 600. That doesn’t seem a huge change, but during those last seven years 84 trees have been removed, and 80 new trees have been planted. The diversity of tree species remains the same, with 55 different species represented in 2020, but seven of those are down to only one remaining example.

It might sound like we’re keeping up, but the shade trees we have lost averaged 27.6 inches in diameter while their replacements are just a fraction of that with an average diameter of about three inches. Sugar maples have taken the largest hit with a loss of 28 followed by 17 dogwoods and 13 red maple trees. The sugar maples we lost averaged 35 inches in diameter as measured in 2013 which is an estimated 193 years old, well below the average life span of three to four hundred years. The largest and oldest tress, a 63-inch diameter red maple approximately 282 years old, could have been planted in 1738.

Our tree population is aging out. In addition, trees are falling victim to damage from drought, invasive insects, storms, pollution, power company “enhancement” techniques and the damaging trend of over mulching. What can be done? Some towns have developed regulations to help keep the balance of street trees even, whereby, if a tree is removed it is required to be replaced by an equivalent somewhere along the town’s roadsides. For example, planting nine four-inch caliper trees would compensate for removing one 36-inch diameter tree.

In Suffield, two groups are trying to keep pace – the Suffield Garden Club, by replacing dogwood trees and the Town’s Helena Bailey Spencer and Val Gallivan Tree Fund Committee, which plants larger shade trees. The Tree Committee, while a Town organization, has its roots in the Garden Club. Both Helena Bailey Spencer and Valyn Gallivan were early members of the Suffield Garden Club, and its club president is required to sit on the committee along with the Town’s tree warden.

Because of the interconnectedness of the two groups and the fact that all of the trees are planted on either state or town property, much confusion surrounds who plants and maintains the trees. With Tree Committee funds restricted to the planting of trees, last year, on behalf of the Town and working hand in hand with the Tree Committee, the Garden Club successfully applied for and received several grants through the Hartford Foundation for Public Giving (two from funds established in part by long time Garden Club members Thea Coburn and Astrid Hanzalek) to prune, treat disease and provide root care for 50 young trees planted over the last 15 years. With these new trees off to a good start, it is incumbent upon homeowners to continue shepherding them along for the benefit of future generations.