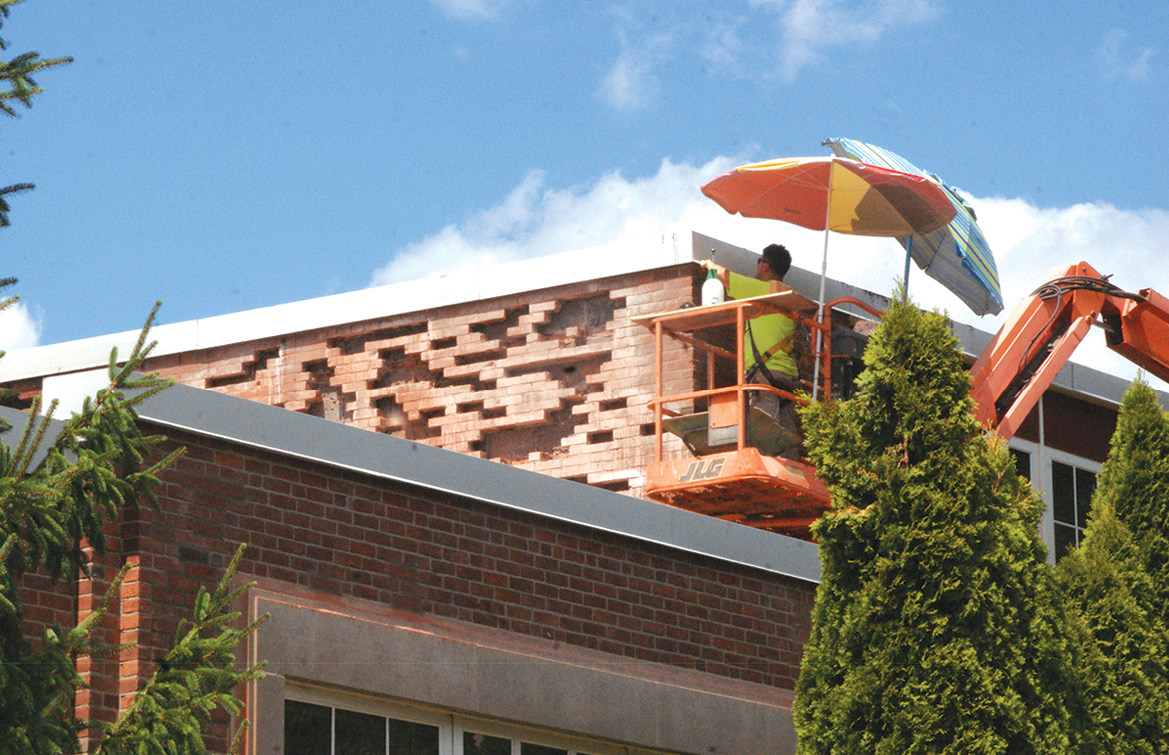 Brick-mason Claudio Logiudice smooths the last joint of a section of façade where a group of bricks needed replacement. Pictured is the front corner of the eastern wing of McAlister Intermediate School. The job of repairing the school’s brickwork has occupied much of the summer.

In the beginning of the brick repair project at McAlister Intermediate School this summer, most of the work was around back, not noticeable to those passing by. A crew of brick-masons from Armani Restoration, a Middletown company, has been busy since late in June, starting with the task of chipping out eroded mortar and loose bricks.

The project, contracted at close to half a million dollars, was called “repointing,” which suggested mostly superficial repair of the eroded mortar between the bricks, but it has actually entailed the entire removal and replacement of many bricks and sections of brickwork. And most of that work appears to have been in one particular part of the building.

The front part, two wings, and the gym/auditorium of McAlister’s building was built near the end of the Great Depression to serve as Suffield’s first high school. For forty years before that, qualified Suffield students had been offered public-supported high school at what is now Suffield Academy. Then the Town took advantage of federal government aid offered to ameliorate the effects of the Depression and saved education costs by operating its own high school. The building, opened in 1938, was constructed by the Spaulding construction company of Suffield, and its bricks are believed to be the last major sale of the Windsor Locks Brick Company. Those bricks have required little repointing.

But the first major expansion to the building, the eastern wing built in 1951, has needed considerable brick repair. One bricklayer explained that if the mortar and the bricks are not perfectly compatible, differential expansion with moisture can loosen the joints. Whatever the reason, the difference between the two building segments is substantial.