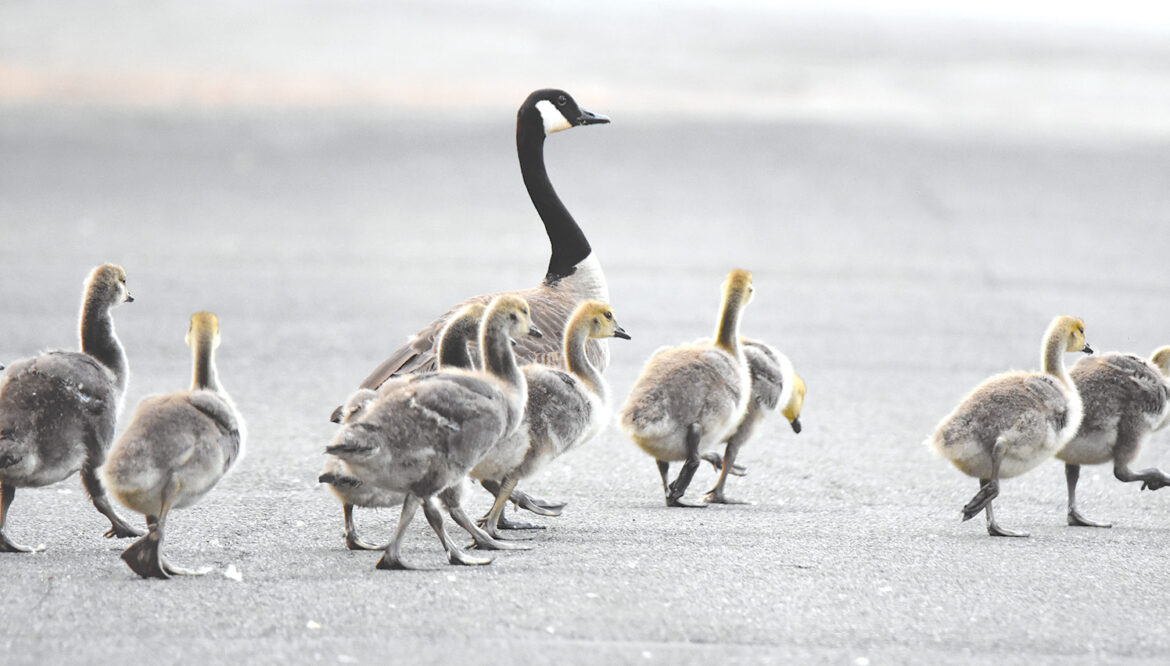 Momma goose does traffic duty as her goslings cross the road. Nature’s processions remain untouched by the pandemic.

Back when our kids were still in our clutches, any road trip usually was centered around wildlife. We’d head off in search of birds with more spectacular plumage, reptiles not found in our back forty and mammals more elusive than the grey squirrels. But we were quick to realize, that despite our best intentions, the kids still loved the simple stuff. One trip they really got under our skin by spending their entire time watching and remarking about dozens of processionary caterpillars as they found their way across some dirt road. To be fair, they were pretty amazing as they walked head to tail in a lengthy line with no breaks. But with the children’s eyes cast towards the ground, they were missing what I had envisioned as the more impressive wildlife sighting in the treetops and on the horizon. But the kids were enthralled with the caterpillars, and years later, they have crept into my psyche so I must have been drawn in by their marching. It turns out they were processing towards a destination where they could bury themselves and form cocoons. They were pretty focused on their mission, and their little caterpillar legs never failed them.

For some reason I have been thinking about those caterpillars a lot of late. Maybe it is the simplicity of their journey, or the fact that they have a journey at all. Or maybe it’s because here in the time of COVID 19, processions are on hiatus, or at least the old fashioned kind where kids or adults lined up like dominos, often in their finest bib and tucker, usually causing those gathered to rise to their feet and madly track down a Kleenex once those tears began. Graduations, weddings and funerals are mostly postponed, and the bagpipes or organ notes remain silent. No one is craning a neck to see the bride walk down the aisle or to watch the family file in, long-faced as they honor a loved one gone. It is a procession-free era, eerily silent, unless one tunes into the news, which is deafening.

So I’m looking for my procession fix elsewhere. Nature usually fills most voids, and here in town I witnessed snapping turtles processing from their pond into the fields to lay their eggs, putting one immense foot in front of the other in the wee hours. Great blue herons took to the skies in formation, returning to their rookeries after a day of swallowing frogs. Ants marched across the sidewalk where a mob scene greeted them from afar. Geese ushered the goslings away from me stopping to stare me down every few steps. I stood for each procession and tried not to weep. Being witness to this lockstep gives me hope that it is something we humans will be able to do in the future. Believe me, we’ll have new eyes when we do.