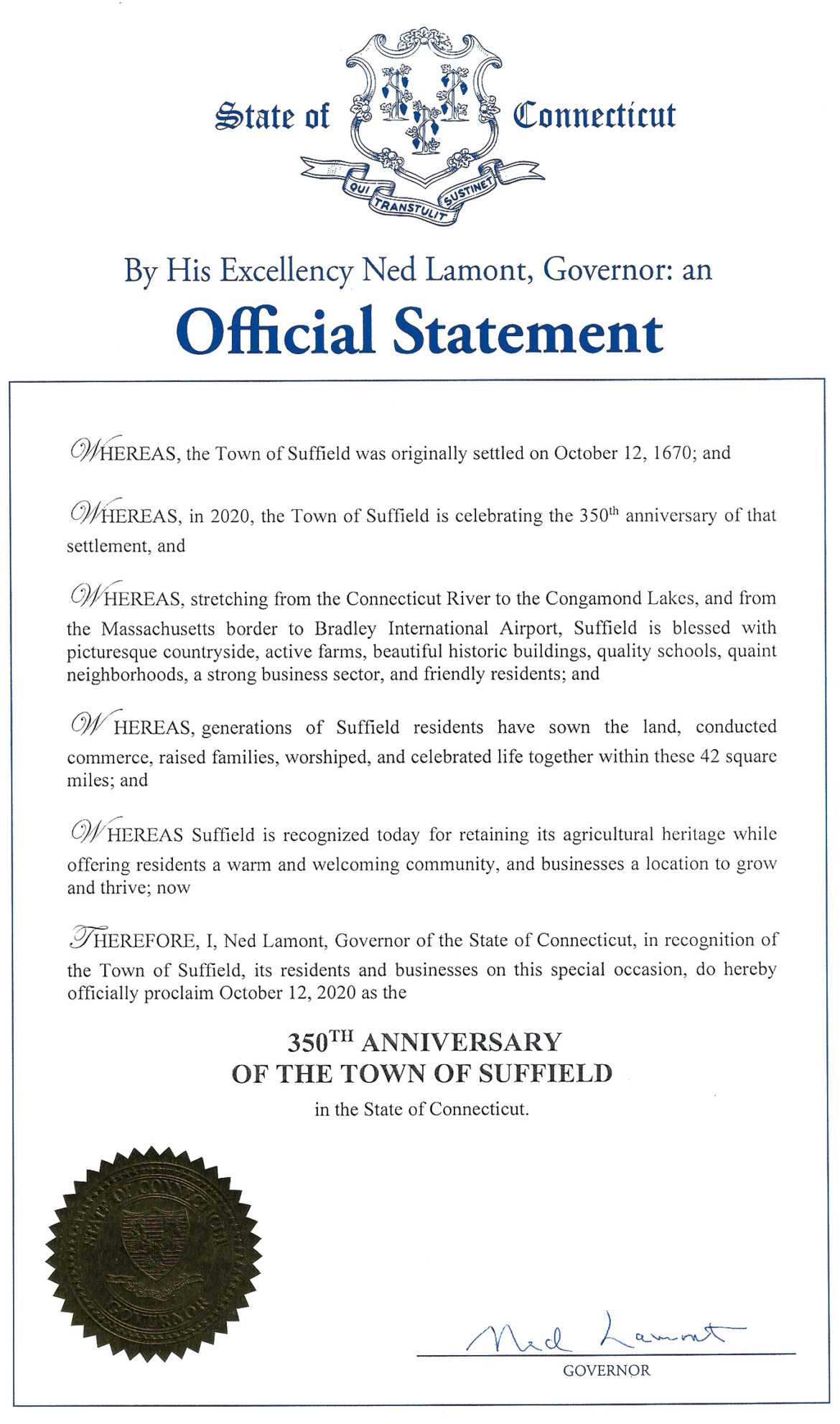 Legend: Events in or about Suffield are blue.

1647 -First witch executed in the American colonies, at Windsor.

1701 – Pynchon sets up an iron works on Stony Brook, near the present East Street.  Eventually there were two more, all on Stony Brook.

1710 – A fulling mill is approved on Stony Brook near the present end of South Main Street, also a cotton yarn mill there, among the first mills of a growth of manufacturing in Suffield.

1744 – Ishmael, a fugitive slave, becomes the first Black landowner in town, having been voted a small parcel.

1749 – Suffield becomes part of Connecticut, after many years of colony boundary argument.

1764 – First issue of the Connecticut Courant

1769 – Joseph Hastings and other Separatists, encouraged by the Second Great Awakening, establish on Hill Street the first Baptist Church in Hartford County.

1774-1784 – Suffield provides strong assistance in the effort to achieve independence, issuing a declaration of resistance in 1774; sending 111 men off to Boston in response to the Lexington Alarm In April 1775, and sending 250 in all to serve in the war.

1775 – General George Washington stops in Suffield on his inspection trip to Boston.  He addresses a crowd on the Green, lunches at the Austin Tavern across the street, then continues on his way.

1801 – The Franklin Paper Mill is built near the mouth of Stony Brook.  The mill operates until 1914; its remains were washed out in the 1955 flood.

1809 – First bridge across the Connecticut River in Connecticut is built.  It was replaced in 1832 by a covered bridge that was washed out in 1900 by an ice-jammed freshet.  New iron bridge at Thompsonville opened in 1894.

1835 – Farmington Canal opens from New Haven to Northampton, passing through the west end of Suffield.  The canal soon failed and was replaced in 1848 by a railroad.

1839 – The first Methodist church in Suffield is built, after services in private homes.  It closed in 1920 when membership dwindled and served as a tenement until it burned.

1840 – The Graham cracker is invented, following the teachings of Suffield’s dietary and behavioral crusader Sylvester Graham.

1861 – Town Hall burns.  New Town Hall is built in 1862 on the site of the old building, which had been moved there from the Green.  Both buildings served as the Center School District schoolhouse as well.

1864 – First National Bank chartered.  It was purchased by PeoplesBank of Holyoke in 2019.

1864 – Travelers Insurance established in Hartford, with many Suffield investors and officials.

1865 – Calvary Episcopal Church organized.  Its first building opened in 1872, but closed and was demolished in 1923.

1869 – Suffield Savings Bank opens as a mutual bank.  Becomes a stock corporation in 1984, fails in 1991, closed by a federal agency.  Now a branch of Webster Bank.

1870 – Railway branch line connects main line at Windsor Locks to Suffield. Along with the railroad, the telegraph brings fast communication to Suffield.

1876 – Alexander Graham Bell is credited with inventing the first telephone.

1893 – The Village of Suffield is established as a governmental borough occupying the Center School District.  Within a few years the Village brought piped water, electricity, sidewalks and, in 1896, a volunteer fire department,

1899 – Sidney A. Kent gives Suffield a new public library building, built on land of his original settler ancestor, Samuel Kent.  In 1972, when the Kent Memorial Library moved across the Green to the former location of the Town Hall, the old library became the Sidney Kent Legare Memorial Library of Suffield Academy.

1920 – Suffield celebrates its quarter-millennial anniversary, including a grand historical pageant attended by more than the population of the town.

1920 – Hundreds of Suffield women register to vote for the first time, following the approval of the nineteenth Federal Constitution amendment.

1930 – Leon Buczynski is elected to the Board of Selectman, the first of Polish heritage to take a key role in Suffield Town government.

1949 – Calvary Episcopal Church is revitalized.  New building is erected in 1951 across the street from its predecessor. Membership dwindles, church merges in 2007 with two churches in Enfield.

1963 – St. Alphonsus College Seminary opens on the grounds of George Hendee’s Hilltop mansion.  School closes in 1990 and is later used by Lincoln Institute for their Connecticut Culinary Institute and other schools.

1967 – Frances Woods is first women elected to the Board of Selectmen.

1970 – Suffield celebrates its tercentennial anniversary, including opening the Suffield Village. Shopping Center, which culminated a major redevelopment in Suffield Center.

2008 – The two Suffield prisons merge to become the MacDougall-Walker C. I., the largest prison in Connecticut.

2012 – Suffield library reopens after roof repair and interior remodeling.  Project was approved after three attempts to expand or build elsewhere are voted down.

2013 – U.S. government shuts down when Congressional stalemate allows funding to run out.

2015 – Library closes for new accessible entrance and major upgrade; reopens in 2019 after closing was extended for remediation of discovered PCB contamination.

2020 – Suffield Schools close in March in response to COVID-19 pandemic.  Reopen in fall with hybrid program of in-school and remote learning.

Next Article
350th Suffield Trivia
Three hundred fifty years ago, in 1670, Suffield was formed as a…