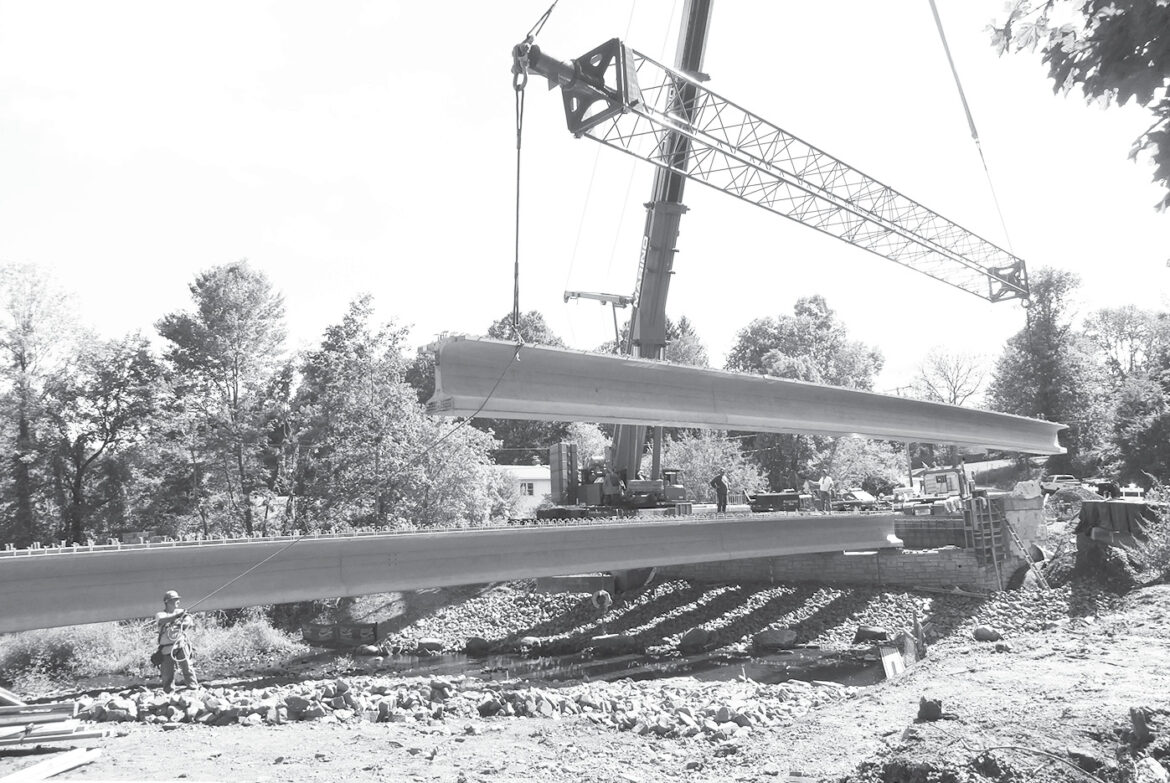 A bridge-builder crewman tugs at his tagline, guiding the last 99-foot beam into place over Stony Brook at Remington Street on August 4. The steel framework above is the crane’s suspension spreader. Stony Brook can be seen below, gurgling quietly after this summer drought.

It was an impressive operation at the Remington Street Bridge project the first week of September. With the new east and west abutments ready to receive their load, and grading preparations on each shore complete, it was time for a giant crane to be set up and for the six beams to be delivered and lifted into place. The operation took only three days.

Marino Crane and Rigging Company’s equipment arrived from Middletown on Tuesday, in many pieces on about ten vehicles. The self-propelled body of the crane, with its driver’s cab and four extendable outrigger arms, came first. Then the crane control cab and base structure was loaded on, followed by the big steel telescoping booms and framed extensions. That assembly was used to add the base for the necessary counterweights, which arrived on a number of tractor-trailers 30 tons at a time and were stacked on in 10- or 20-ton pieces. Partway through loading the weights, the main winch was added between the two stacks of weights, which totaled almost 150 tons when all the weights had been loaded. Then the counterweights and winch assembly was secured to the control cab and booms, which had been swiveling without the counterweights, putting the crane together. That was completed by Wednesday morning, when the beams were to start coming.

The 99-foot pre-stressed concrete I-beams had been manufactured in Vermont. The first one arrived unexpectedly late, after its over-long tractor trailer had problems maneuvering some of the turns in Suffield, particular the backing-up turn onto Remington from South Street, so the trailer could be positioned close to the eastern abutment. Lifting each beam, swinging it out over Stony Brook, and carefully setting it down exactly where it belonged went smoothly. Four beams were set that day.

Beams five and six were set on Thursday morning, and the crane crew went to work to take their big machine apart. It was gone by the end of the week. Bridge-building is a dangerous operation, and one experienced watcher’s first comment was, “. . . and no one got hurt.”

Work on preparing the forms for pouring the concrete back walls and “diaphragms” (between the beams at each end) proceeded, and crushed rock was spread and compacted to bring the approach roads up to their new levels. The sewer pipe under the bridge was installed and work began on its connections.

At press time there was plenty yet to be done: preparing the reinforced concrete bridge deck, with its north-side sidewalk, installing the guard rail cables, shifting the sewer line back to its new crossing, grading and paving the approaches on both sides, coloring the “stone” abutment facings, and more. But one of contractor Arborio’s men said the project was still heading for an on-schedule completion this fall.