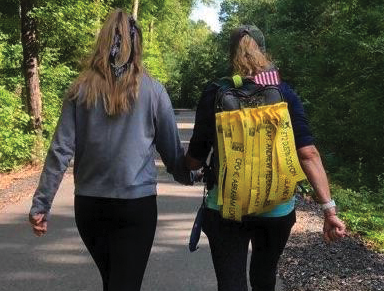 Karen on the trail with daughter Annette providing support. Both were honoring her son, Dustin Doyon and nine other crewmembers who perished on August 21, 2017.

Editor’s Note: Rucking is jargon for a tough walk with a heavy load.

For Karen Doyon, Sunday, September 13 was no ordinary Sunday. It was the day she had been training for since November 2019, signing up for Tough Ruck, a military type walk carrying a weighted backpack. It was her way of honoring her son, Dustin Doyon (Electronics Technician 2nd Class Petty Officer and Certified Rescue Swimmer) and nine other crew members who perished on August 21, 2017, after their ship, the USS John McCain, collided with another ship off the coast of Singapore.

Tough Ruck is a group of military and civilians whose sole purpose is to Ruck in honor and in memory of our fallen service members, police, firefighters and EMTs, while raising funds to support military families in times of need. It is a 26.2-mile walk carrying a backpack of at least 15 pounds with names printed on individual ribbons of the fallen men and women they are honoring. Originally scheduled for April 19, 2020, one day before the scheduled Boston Marathon, the event was postponed due to Covid-19. It was rescheduled as a “virtual” walk for the weekend of September 11, coincidentally the same weekend that Dustin was laid to rest three years ago.

In October 2018, a friend of a co-worker asked if she could put a ribbon on her backpack to honor Dustin in a Ruck. At the 2nd Annual Dustin Doyon Road Race in May 2019, Karen met this person and discovered Rucking. She knew that this was a purposeful way she could honor Dustin and his shipmates and began training in November 2019. Walking twice a week, at first with four to five pounds of weight in her backpack and increasing to 25 pounds along with daily exercising was her beginning. Adding running along with a change to a more nutritious diet, monitored by her daughter, Annette Doyon, a certified trainer, Karen was on her way to tackle her mission rucking 13 miles in her last training session just two weeks ago.

On Sunday, September 13, Karen’s Ruck took place on a route carefully planned by her and husband Brian, who supported her endlessly throughout this journey. She walked for the fallen on the Suffield Bike Path, beginning and ending at the Phelps Road entrance. Tough Ruck, sponsored and fueled by the Boston Marathon, monitored the trek every second of the way to verify her participation, which she completed in 6 hours 49 minutes with no stops for rests, placing her 40th out of 433 male and female participants. Karen felt that it was an honor and privilege to take part in this event, and she raised over $2,800 for military families in Massachusetts. The walk was limited to 1,000 participants and a total of $652,590 was raised over that weekend,

Greeted by family and close friends at the finish line, Karen related that the sweetest sound she heard coming through her earbuds from the RaceJoy tracking app was “Congratulations! You have just completed 26.2 miles of your 2020 Tough Ruck.” Her sweetest sight was seeing her husband and many of their dear friends with sheer joy on their faces as she crossed the finish line. RUCK ON!