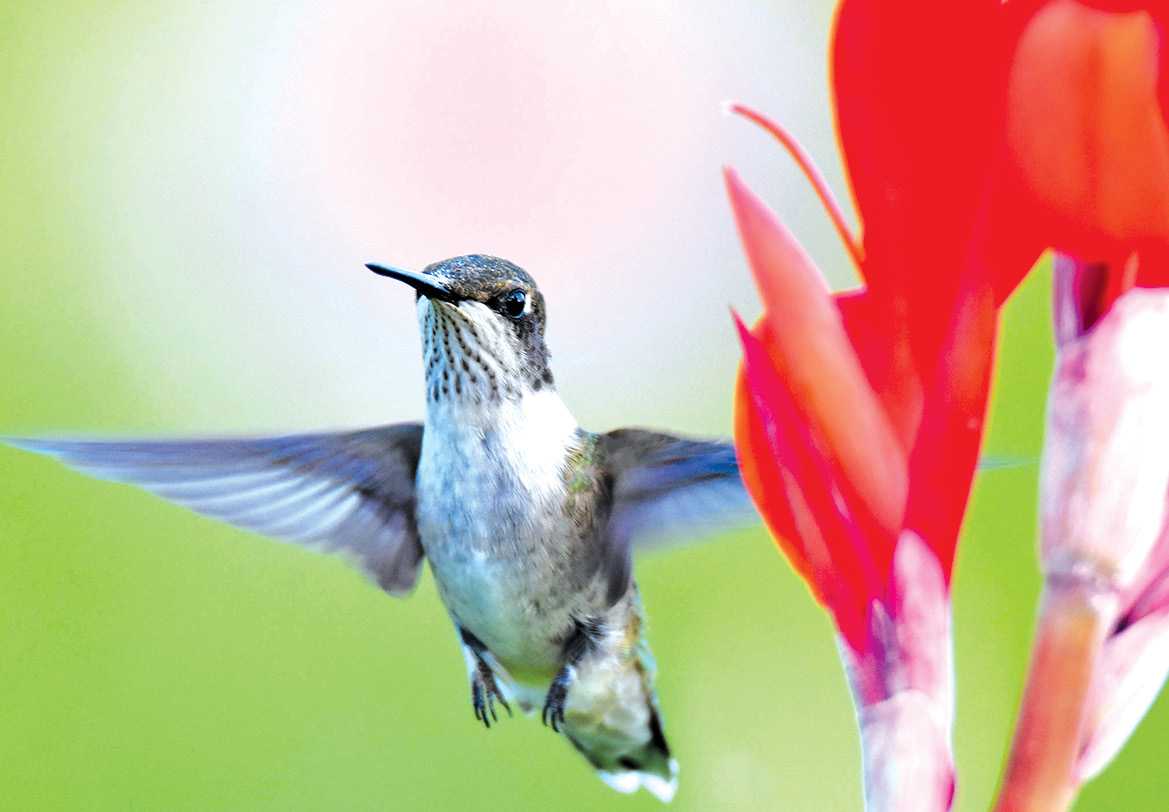 This impressive local migrant, a ruby-throated hummingbird only 3 to 3.5 inches long and weighing about the same as a U.S. penny, may travel as far as Costa Rica during fall migration.

It’s time to say goodbye to our smallest migratory bird, the ruby throated hummingbird, as they set off for their winter feeding grounds in the tropics. After a season of collecting nectar and staking claim to their own turf with impressive feistiness, off they go. The hummingbirds, especially the males, have dazzled us with their iridescent green and red feathers and their ability to beat their wings 50 times per second as they hover and even fly backwards around our gardens. They have raised their tiny broods and left behind their tiny nests constructed of moss and lichen and held together with spider silk. Spider silk, holy cow. So, when I am out admiring the dew-covered webs in the fields in the wee hours , I am amazed at the dexterity the hummers must have to gather that silk . They harvest it as the ultimate in diminutive construction materials to keep their tiny house intact. Their size sure doesn’t hold them back.

Having tiny hummingbirds on the brain can really lead you down some strange mental rabbit hole, and that’s exactly where I have been. In college I had a petite friend who had all sorts of tricks up her sleeve as well as wide appeal. She could fit in the trunk of a car so she wouldn’t have to pay when we went to public beaches (when we should have been studying). What seemed like a smart move decades ago terrifies me now that I am consumed with worry. She also was very appealing to boys who wanted to hoist her on their shoulders when we played games of chicken in the lapping waves. Believe me, no one was hoisting me. With size on my mind, one thing led to another and I started to think of vertically- challenged humans who have had great success, Churchill, Gandhi, Queen Victoria. And, wouldn’t you know my synapses were firing as Raspberry Beret came on the car radio, and suddenly I was immersed in all things Prince, including his small stature of five foot two. He’s an example of one not held back by size as he was madly writing songs and performing and managed to earn seven Grammys along with way.

And continuing the size-challenged thread, I have a grandson who took a detour in the growth department. When failing to thrive, he received a belated diagnosis of a genetic deletion followed by jaw and brain stem surgery. Tall does not appear to be in his wheelhouse. But he embraces his low center of gravity with a good mind and legs that carry him like the wind. He’s right in the thick of things, ready for any challenge. There may be more challenges in his future, but size is not going to keep him down. And spending time with him reminds me that mightiness comes from within. I’m pretty sure the hummingbirds would agree with me on that one.

Next Article
A Very Different SVAA Awards Ceremony
As was the case with most everything during this pandemic, the annual…