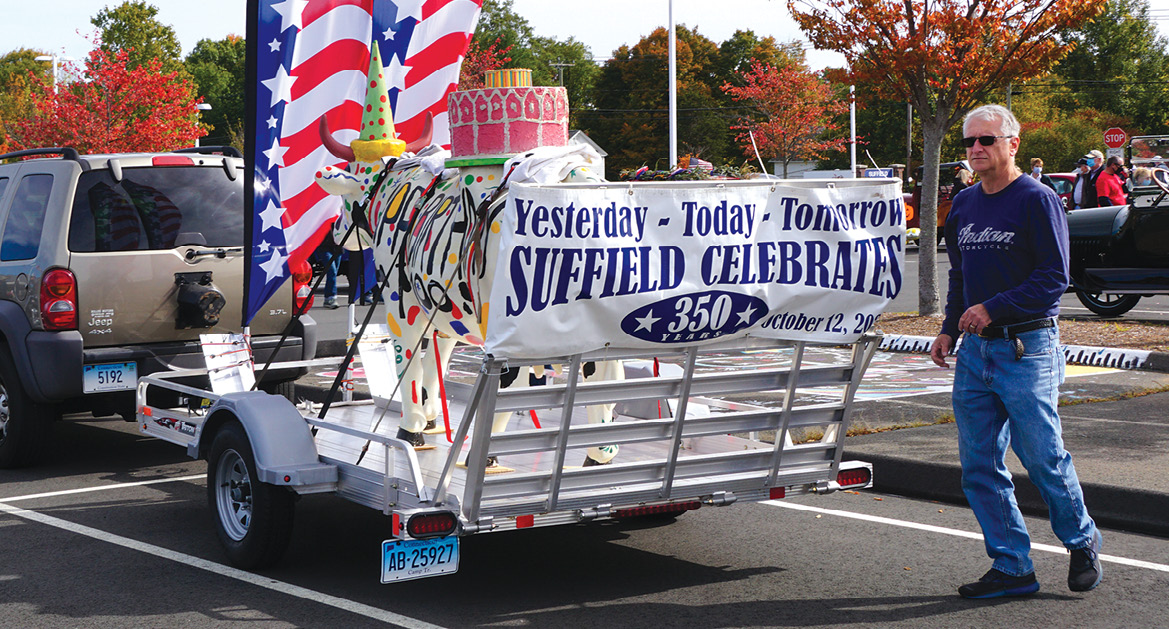 Enthusiastic celebrators gathered in the Suffield High School parking lot on a lovely fall afternoon, Sunday, October 11, for an anniversary car parade. This was planned by the Suffield 350th Committee as the best substitute possible in today’s pandemic environment for the grand parade that had originally been expected. It turned out to be an excellent replacement, “showing the flag,” so to speak, around much of the town and experienced with considerable pleasure by many of the drivers. The 32-mile route had been laid out to include all neighborhoods on both sides of the mountain ridge that could reasonably be covered. It took an hour and three-quarters at a nominal 35 mph (but an average of less than 20). Key intersections were controlled by police officers, and the event was completed with no reported problems.

Leading the parade were two police cars and vehicles from the Suffield Volunteer Ambulance Association, along with the Suffield Fire Department’s new Fire Rescue engine. Then came 350th committee chair Kacy Colston’s little red car, with photos of the committee members’ faces stuck on the windows. Many of the vehicles that followed were festooned with colorful banners and flags. Interesting vintage, classic, and hot rods were included, as well as several motorcycles, along with Justin Segar’s 1984 fire engine, loaded with happy wavers. There were about 40 entries in all.

The planners had hoped that many residents would come to the published route to view the parade, and many did. It was estimated to be several hundreds on route.This year’s anniversary parade was a very enjoyable occasion for participants and viewers alike. Now we can all look forward to the traditional grand parade planned for 2021.

Next Article
Love in the Time of Covid
Here in this time of Covid-19, with all its limitations and boundaries,…