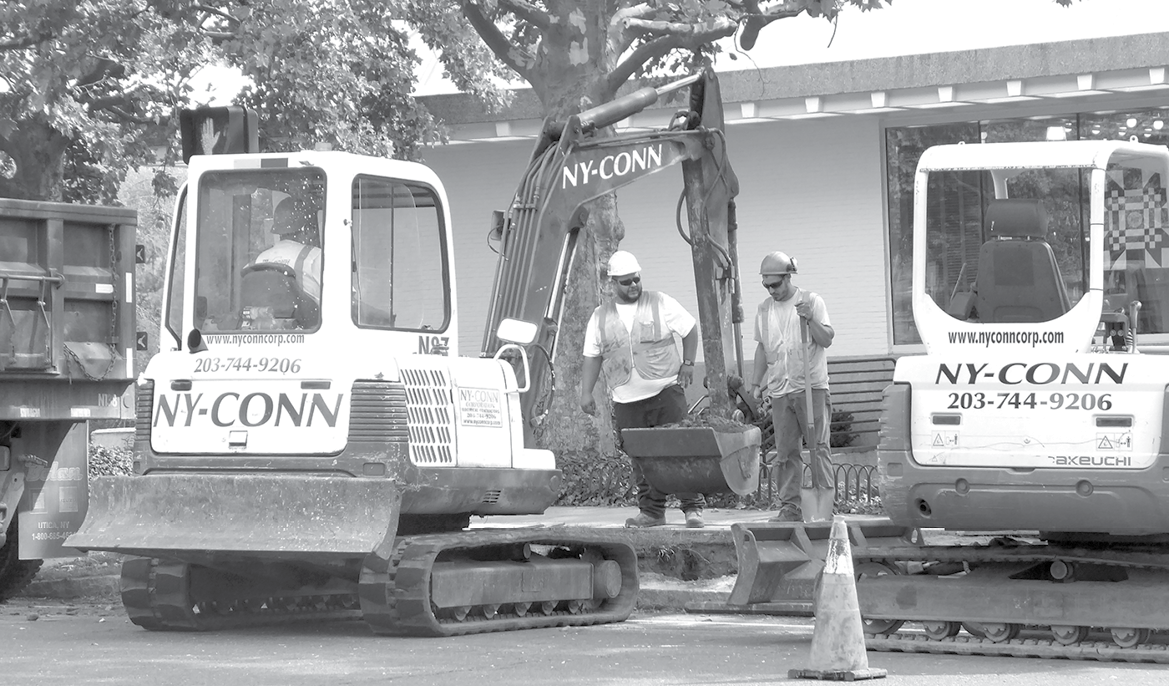 Traffic jams in Suffield Center plagued motorists at the end of September and early October as lane changes were enforced to allow a construction crew to do its work. It turned out to be a substantial job, as two new steel towers were being installed, along with many stretches of electrical cable buried under the pavement. A crew chief from the NY-CONN Corp., electrical contractors who come from Danbury each morning, explained some of what was happening, but an engineering drawing provided by Town Engineer Gerry Turbet made it clear.

The traffic signals at both intersections have been supported by a Y-shaped configuration of cables from three wooden utility poles, at Bridge Street, and two utility poles plus a steel pole at Mountain Road. At Bridge Street, a new cable Y will still be attached to the same two poles on the edge of South Green, but the other attachment will be shifted to a new steel pole on the south corner.

The traffic signals at Mountain Road will no longer hang from cables. They will be attached to a 45-foot long bracket reaching out from a new steel pole in front of the library.

All three cross walks will no longer be striped, and the drawing shows pedestrian pushbuttons available at the two present locations for crossing Main Street in front of the library (one shifted somewhat), plus new buttons and signage at the Bridge Street crossing. According to the plans, walkers on the Green who want to cross Mountain Road safely without crossing Main Street and back again will still have to walk to High Street and hope drivers will respect the striped crossings there.

The stripes for crossing Mountain Road and Bridge Street are to be “eradicated.” That change may be a response to the slight ambiguity of having a striped crossing at a signalized intersection — a driver might ask himself, “Should I stop for that waiting pedestrian at the striped crossing as the law requires, even though the stop light is green?”

A significant new feature is to be added to both intersections: video cameras. At Bridge Street, cameras will be mounted on a 20-foot bracket off the new steel pole, reaching out over South Main Street. At Mountain Road, the cameras will be clustered at the end of the bracket that will support the traffic lights.

All three of the roads involved are state highways (75, 168, and Bridge Street for only a few hundred yards as Highway 513), so the entire project is under the control of the Connecticut Department of Transportation. As part of a 15-town Conn DOT project in Highway District 4, the structures, the signals, and sometimes the traffic patterns of 27 intersections are being completely reworked. The two intersections in Suffield Town Center are part of this program, which has been several years in planning.

Next Article
Don’t Be So Certain
Question: Is Philadelphia the capital of Pennsylvania? How certain are you?