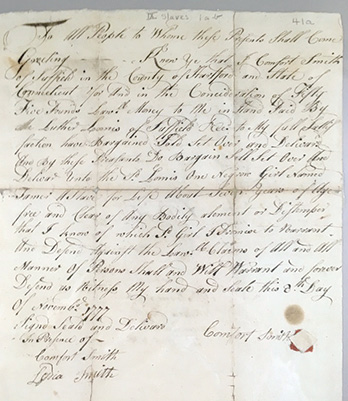 This 1777 bill of sale for an enslaved girl named Tamar is one of the many treasured documents archived in the Kent Memorial Library’s historical room.

The Suffield Historical Society hosted Dennis Culliton, chair and co-founder of the Witness Stones Project, during three online classes during October. Using a document-based approach to understanding slavery in colonial New England, Culliton helped the class build a narrative about an enslaved woman named Tamar by examining a bill of sale document, a marriage record, and other historical records.

The mission of the Witness Stones Project is “to restore the history and honor the humanity and contributions of the enslaved individuals who helped build our communities.”  A tangible product of the project is typically a small bronze plaque installed on a memorial stone or terrace in a relevant location.

The Project’s webpage describes how the first Witness Stone memorial was installed in Guilford in 2017, and soon after that, West Hartford and Madison followed suit. Along with Suffield, Witness Stone projects are currently underway in Greenwich, New Haven and Salisbury.

During the Suffield online class workshops, Dennis helped participants research the life of Tamar, who was enslaved by Comfort Smith, the Suffield River Tavern operator of Suffield, from 1770 to 1777 and then by Luther Loomis, also of Suffield, from 1777 to 1798. Her husband, Solomon Smith of East Haddam, purchased her in 1798 from Loomis. Solomon Smith was the son of Venture Smith, whose book, A Narrative of the Life and Adventures of Venture: a Native of Africa: But Resident above Sixty Years in the United States of America, was published in 1798 in New London.

The Suffield Historical Society’s Facebook page will share information regarding a November 4th Installation eremony scheduled for 7 p.m. via Zoom.