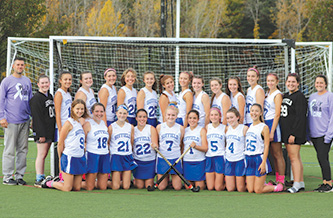 The Girls Field Hockey team was undefeated in a 10-0 Season.

Unfortunately, our field hockey team wasn’t able to compete against their NCCC seeds as a result of two other teams quarantining.

Nevertheless, the girls had an amazing undefeated season. They finished their regular season 10-0 and had many outstanding achievements from multiple players on the field.

Girls Cross Country had an incredible end to the season! They finished their season undefeated and took home the NCCC West title last Wednesday, winning the league. Congratulations to Haley Young who made All-State and Abby Schulz, Emma Conway and Caroline Bishop who made All-Conference! Those four girls finished top 10 in the championship race which secured the win. The whole team had a strong race and an incredibly strong season.

Congratulations to Nate Davidson, Blake Dufresne, and Griffin Mandirola, who placed in the top three and secured the win for their team.

Next Article
Silent Night
In November, the Library was decorated for Diwali, the Hindu Festival of…