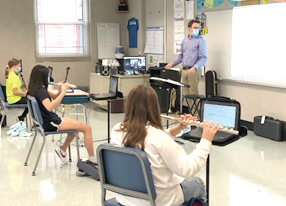 Mr. Cory Killian, Band Director, is pictured in a class working with sixth grade band students both in-person and on-line.

Despite some obstacles – including the current COVID-19 epidemic – the Suffield Middle School program continues to flourish as one of the strongest academic program the school offers its approximately 450 students on an annual basis.

“One of the things we are most proud of is that so many students want to be a part of our program. They look forward to engaging in one of the many music classes we offer,” said Laura Noonan, the middle school choral director and 24-year veteran of the school district.

All students at the middle school – which consists of students in grades 6, 7, and 8 – have the opportunity to participate in one of the three main courses offered at the school – Band, Chorus, or General Music – during the school day. Two of the courses, Band and Chorus, are performing ensembles. Students in those courses attend classes in large ensemble groupings as well as smaller-cohorted sectional rehearsals, approximately three times a week. The students prepare for concerts two times a year: in the early winter season, around the time of the holidays, and then again in the spring, sometime in early May.

“Our focus for these performances is to help the students realize the quality aspect of their growth as musicians both as individuals and as part of a larger ensemble,” said Corey Killian, the Suffield Middle School Band Director. “We want them to think of a broader perspective than they are accustomed, so the performance is not only enjoyable for the students involved, but the audience as well.”

Even for the non-performing course, General Music, the team of teachers are constantly creating learning opportunities of a high quality and diverse topics such as: how to read and write music, a thematic approach to music history and genres and sound system mechanics. Some of the students are learning how to play the ukulele.

“The General Music class has always been a way to reach kids who love music, but do not want to perform publicly,” said Noonan. “We feel that music is a part of everyone’s life, and we want to help them make it a part of their life as well.”

Based on current enrollments, it is evident that the students do want to be involved with such a quality program. Over the last five years, the percentage of middle school students involved in the two performing ensembles has grown exponentially. During the 2016-2017 school year, only 14 percent of the student population engaged in the band program. In the current school year (2020-2021), that number has mushroomed to just under 40 percent. In a similar fashion, the choral program has also seen an increase of student engagement of 20 percent in that same time period. Overall, the percentage of middle school students engaged in the performance ensembles has grown from 36 percent of the total student population to nearly double that percentage (71 percent) in just over a half of a decade.

The value of this type of growth extends beyond the music hallway where the student musicians perfect their craft. According to a study published by the National Association for Musical Education (2015), schools with strong music programs have higher promotion (graduation) rates and a rate of daily student attendance over 94 percent. Additionally, a similar study completed the same year by the Areté Music Academy, located in New Jersey, found that students involved in strong musical programs worked better in teams, had enhanced critical thinking skills, and pursued higher educational opportunities more frequently.

Given this level of potential positive impact on their students’ growth, it’s no wonder that the middle school music teachers were concerned this past August about the viability of maintaining such rich learning experiences for their students amidst the COVID-19 fallout.

“Coming into this year,” said Killian, “Our number one priority was keeping our students safe.”

The preparation for that began in early summer, when Killian, Noonan, and Amy Wilson, the Band Director for McAlister Intermediate School, worked with Superintendent Timothy Van Tasel and both schools’ administrative teams to plan for the upcoming year. The teacher team reviewed papers from national organizations, as well as the guidance provided by the Connecticut Department of Education, to see what would be feasible given all the safety protocols suggested by those organizations.

Without skipping a beat, the teachers worked with building administrators and Larry Plano, the District Facility Director, to change classroom venues, increase air flow in each location where the courses were being held. They creatively schedule smaller ensemble groupings, and provide students with access to materials such as prepared masks that allowed them to safely play their instruments. Additionally, the teachers learned new on-line platforms and other technologies, such as how to incorporate the improved cameras connected to their classroom computers to keep the courses available to students attending classes virtually.

In addition to the pandemic, the department is also facing other obstacles, such as where to house their ever-growing program. The rooms designated for the band and choral ensembles may have been better suited for the size of those programs when the building first housed the middle school in 2002. However, given the recent growth of the music program, district and town officials are working with the music teachers to problem solve potential resolutions for the future.

“We really feel that our music program can become something the whole district would be proud of,” said Killian. “Music can change students’ lives for the better in so many ways.”

Next Article
Great Achievements in SHS Sports
Unfortunately, our field hockey team wasn't able to compete against their NCCC…