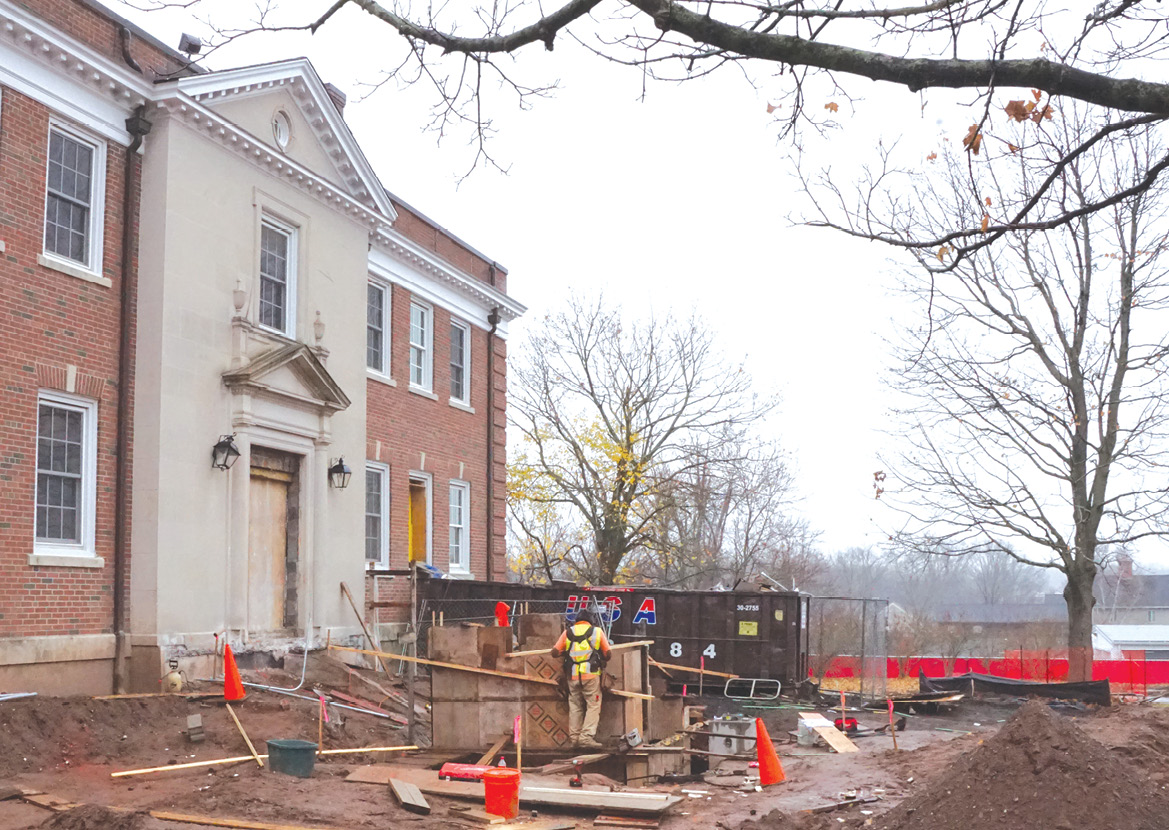 In mid-November, a construction worker prepares forms for the concrete walls at the new front steps being built as part of the Town Hall renovation project. A three-segment ADA accessibility ramp will occupy the space in the foreground. The boarded-up doorway awaits delivery of the new single door and side panels in December.

Exterior and interior work in the Town Hall Renovation project proceeds, with good progress. The second floor level is close to complete, and First Selectman Melissa Mack reported she had made a walk-through of the area where her office suite will be and was very pleased with what she saw. Her own office will be configured pretty much as before, with some changes to the adjacent offices on that side of that level. Significant changes are being made in the electrical power distribution on the second floor, where the computer server requires a high level of security.

Below, in the new meeting room that will occupy most of the west end of the first floor, framing is under way, and other work on that floor proceeds well. Work on the ground floor is less advanced, but proceeding as planned.

The concrete walls of the Town Clerk’s new vault have been poured. An addition behind an existing ground floor room, the vault will have four windowless concrete walls for security, and a very secure door opening into the adjacent Town Clerk’s office.

After considerable discussion, the idea of a garden planter among the three segments of the accessibility ramp at the front door was abandoned, and detail design of the ramp was resumed. The Permanent Building Commission voted to recommend to the Selectmen a decorative railing system not in earlier plans for the ramp, at a cost not to exceed $29,994. The cost would be covered by existing accounts for owner’s contingency and contractor’s contingency.

At the October 21 Selectmen’s meeting, the Board voted to approve a $41,000 emergency project, waiving the customary bid and purchase policy, to repair leaks discovered in the Town Hall roof.

Contractor Gilbane predicted at the end of October that the renovation project would be completed in mid-January.

Next Article
How Churches are Coping with COVID-19
The COVID-19 crisis has had ramifications in all areas of Suffield life.…