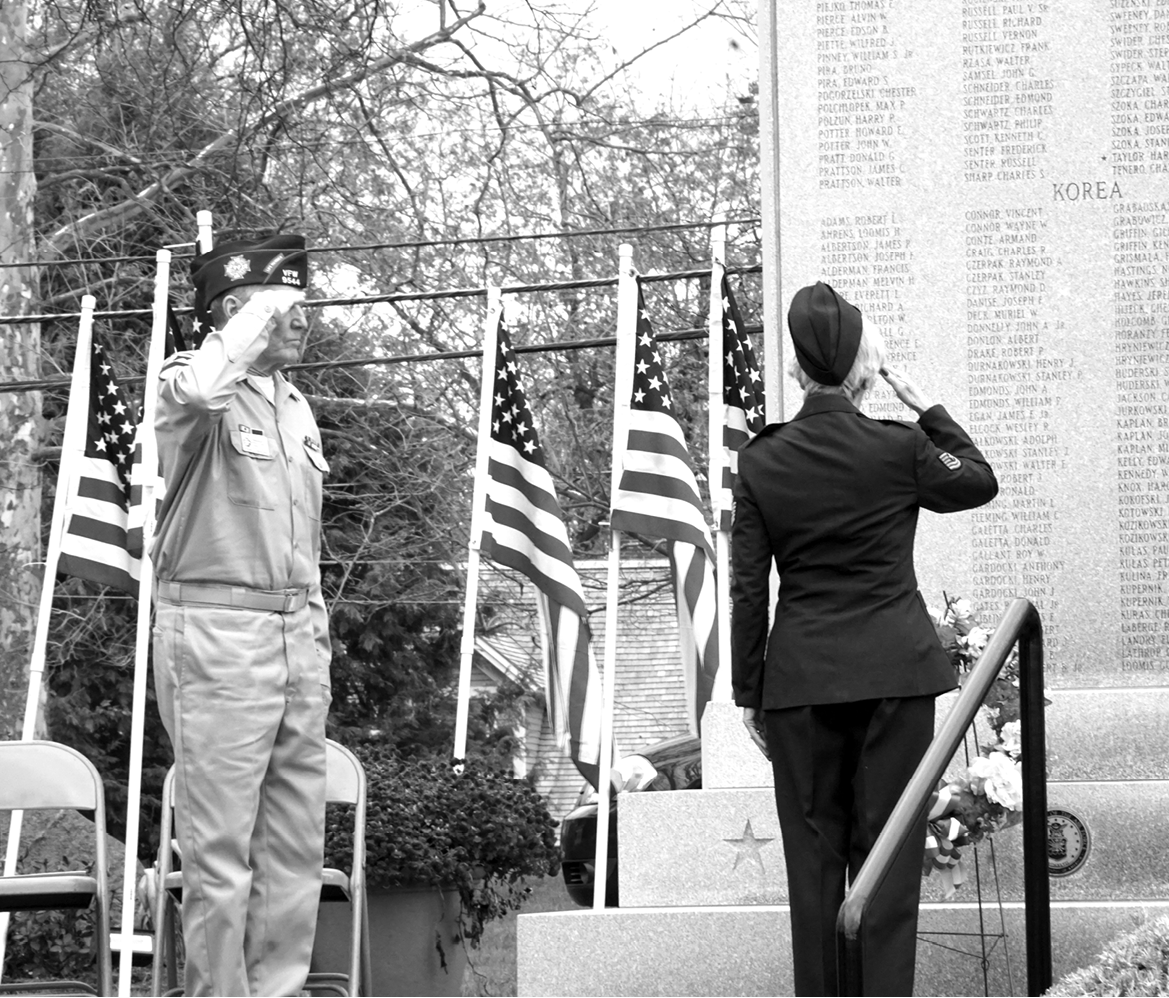 Jim Hunter and Joanne Rhoades hold their salute for a moment after Rhoades placed a Wreath of Remembrance at the base of the Veterans Memorial, closing Suffield’s Veterans Day ceremony.

For a moment, it seemed possible that Suffieldians who showed up at Veterans Park for this year’s traditional Veterans Day observance might have been surprised and disappointed. There had been no publicity for the event. But when the First Selectman’s office learned that planning had begun at Suffield’s local post of the Veterans of Foreign Wars, which for many years has organized the observance, they quickly put publicity in the Town’s website and social media. Learning of the schedule, ex-innkeeper, ex-first selectman Paul Kulas, who still undertakes his retirement occupation giving one-man concerts, offered to provide appropriate recorded music.

So the tradition was unbroken, and 50 or 60 citizens showed up, perhaps more than in some other years. Lt. Col. Bill Moryto, USMC Ret., opened as master of ceremonies; Kulas keyed up a rousing brass band version of the National Anthem, following with It’s a Grand Old Flag. Master Sgt. Jim Hunter, USArmy Ret., offered the opening prayer.

First Selectman Melissa Mack welcomed the gathering and delivered a meaningful, short speech, with appropriate reference to the Field of Flags, 30 of which provided the backdrop for this annual ceremony. (Waving colorfully nearby on the Center Green were 320 additional flags, totaling 350 for the Town’s annivrsary.) Mack spoke of Ed Nielson, a locally well-known, recently deceased veteran who had fought in the Battle of the Bulge during World War II. She said there were about 600 veterans living in Suffield now and explained how we all can enjoy our secure and happy life in a beautiful town because of the efforts and sacrifices many like Nielson have made.

Col. Moryto then offered his own comments, recounting the long military tradition of his family, including his third great-grandfather Chester Woodworth of Suffield. He fought in the Civil War, including the Battle of Antietam, where many Suffield men died in action. Woodworth’s name is on the monument that provided the stage for this ceremony. Moryto closed with the comment that in his present role he was standing on the shoulders of his military ancestors.

A medley of music representing all our military services followed.

Then Col. Moryto led the gathering in a moment of silent respect for the military Missing in Action/Prisoner of War remembrance, as Tech Sgt. Joanne Rhoades, USAF Ret., stood at attention next to a small table with the traditional place setting for the missing man. She then strode solemnly forward and placed the customary wreath at the base of the Veterans Memorial. Following three volleys from the VFW firing squad, the final musical piece was God Bless America.

Col. Moryto closed with two short announcements: He encouraged new or newly arrived veterans to join the local VFW and add their support in this difficult period. And he announced that First Selectman Mack is soliciting volunteers for a newly-formed Veterans Appreciation Committee.

Next Article
Food For Thought
“Seventy years ago today, a bright Sunday morning was darkened by the…