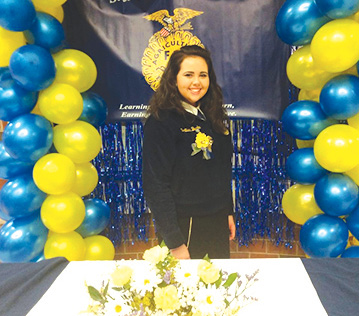 Photo provided by the Burke family

In the October issue of the Observer, I wrote that Brittani Burke, a June graduate of the Suffield Agriscience program, had won two awards. Now she has won a third award, the prestigious Eastern Regional Star Farmer Award, which represents an area from Maine to West Virginia. Over the summer, Brittani won a national award, a Silver in Proficiency in Diversified Livestock Production, and became the Connecticut Star Farmer, an award which enabled her to compete for the regional award. All of her awards are sponsored by the FFA (formerly Future Farmers of America).

Brittani won the Eastern Regional Star Farmer award in September at the Big E fairgrounds. Judging for the award is based upon an interview with a panel of judges who review the educational achievement, participation in FFA, leadership qualities, entrepreneurial spirit, aspiration and passion of the contestant and finally, the scope and success of a project in a supervised agricultural experience.

To qualify for the award Brittani had to excel in her project, which was to raise beef, sheep and swine as a business enterprise. She raised, bred, showed, marketed and sold her animals and their embryos throughout the United States and Canada. The entire process for the award was daunting, but like cream on a bottle of milk, Brittani rose to the top.

Brittani resides with her parents, Christa and William, in Ellington. Upon graduation from the University of Illinois with a degree in animal science agribusiness and nutrition, she plans to return to the family’s Burke Ridge Farm and develop it to the next level, although it is already a prosperous and beautiful farm. Brittani’s future looks bright and productive. She is a role model for other future farmers to follow.