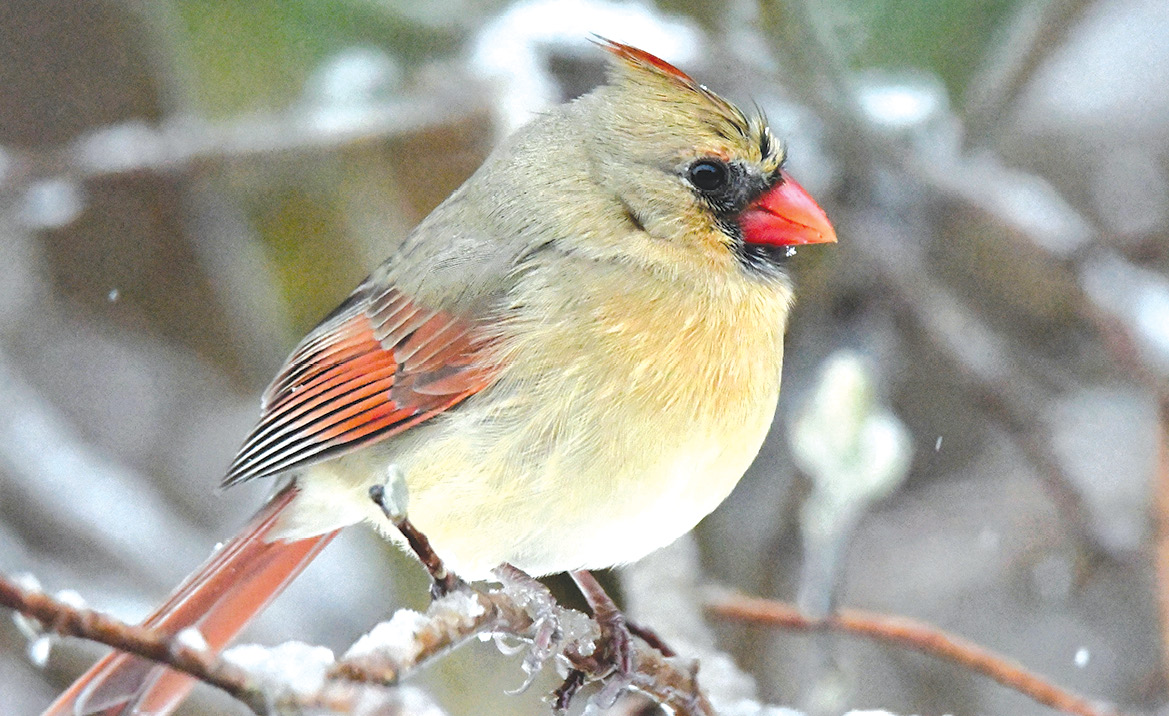 The unpretentious female Northern Cardinal is compelling with her subtle beauty.

I have a lot of fond memories from my early years at Bridge Street School where I learned to read and skip rope. But to be honest, a typical school day for me did include some sniffing of mimeos hot off the press and admiring their lavender ink while eating gobs of Elmer’s paste directly from the applicator. Back in the day, we sat in rows and the wooden floors of the old school were at an incline. This was a good thing because the boy in front of me had an accident one day, and sloping floor allowed the urine to pool in the back of the room instead of on my Buster Brown shoes that my mom had insisted I scuff in the driveway for hours. The teacher took these mishaps in stride and barely missed a beat. Her attitude helped to put things in perspective at school and beyond. At any rate, as soon as I got home from school urine and paste were a distant memory. I would eat a stack of cookies and wash them down with a gallon of milk, a combination I still love to this day. Then the great outdoors would be calling my name. But, if it happened to be rainy, I would get out my set of Crayola 64 crayons. I’d extract my favorites from the box, magenta and aquamarine.

A few decades later, the cookies are still going down easy, but my choice in crayons has made a radical change. Magenta now seems too garish, so I’d pick chestnut or burnt orange. Naturally, in keeping up with the times, there are new colors in that crayon box and some of the old standbys have been retired. And based on my reading, uproar from the Raw Umber and Maize Preservation Society attempted to keep older colors in production but to no avail. Retirement did make room for new colors with a broader appeal and jazzy names. I appreciate the subtleties of the more understated colors as they often mimic much of the natural world. And sometimes this carries over to the birds at my feeder. These days, despite all the attention the bright red male cardinal gets, I’m looking for his mate. The female cardinal is buff colored with some dips of color on her head and tail area. But these color patches are done with a light hand, and no one would shame the mama cardinal for anything resembling flamboyance. A pair of cardinals descend on my feeder around dusk and eat sunflower seeds and look regal. During the warmer months, insects and berries supplement their diet. These beautiful and prolific birds raise two or three broods each year. The young fledge, often less than two weeks after hatching from their eggs. The amorous couple sets the stage for a summer of loving and chick rearing with a gesture for which you should be on the lookout. The male elegantly passes a seed from his beak into his mates as the ultimate sign of courtship. All we need is to dim the lights and sound the violins. In keeping with the ultimate in bird romance, cardinals mate for life and don’t succumb to wanderlust as they do not partake in the spring break lifestyle. They usually live within a mile of where they hatched. So keep your eyes peeled for cardinals, especially the female if you are looking to embrace the more subtle beauty at the feeder.

And honestly, I don’t think the female cardinal is pining for that red plumage one bit. She is camouflaged on her nest or in the thicket. And, back in the 1800s, the male cardinal paid a high price for his red plumage. Folks used to trap the males and keep them as pets to enjoy a splash of color in their parlors until the Migratory Bird Treaty Act was passed. So being understated is a good thing. And, looking back to my grade school days with my box of Crayolas and my days of teaching first grade, it was the understated colors that were worn down to a nubbin. So clearly, mama cardinal is on to something. And you can bet the Crayola people have an ever evolving name for her plumage: tumbleweed, fuzzy wuzzy, burnt umber, almond, sepia or Van Dyke brown. Call it what you will, I’ll just call it beautiful.

Next Article
Bobcats
On the afternoon of December 8, the photographer’s family in a Bramble…