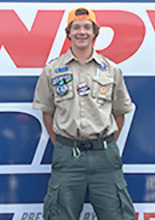 Suffield High School junior Matt Sinofsky has a dual-purpose idea for his Eagle Scout project. A member of Boy Scout Troop 66, Sinofsky proposes to build a ceremonial fire pit at Sunrise Park to be used exclusively for American flag retirement while honoring veterans with a brick and stone configuration surrounding it.

After speaking with First Selectman Mack and obtaining the myriad necessary permissions from his troop, the Boy Scout Council, Park Superintendent O’Brien and the Conservation Commission, he hopes to begin excavation for the project in mid to late March. As envisioned, the pit will be the centerpiece of a circle with bricks radiating out in lines to divide the circle into fourths. Stones will fill in between the lines. At present there are two options for the Sunrise site: one is in the corner of the lower field; the other on top of the big hill in front of the pavilion which is the one Sinofsky favors. He also plans to build a bench for the site.

Sinofsky chose this project because he has been to the ceremonial flag retirement ceremonies at the pit at Northwest Park in Windsor and always thought they were cool. He also wanted to honor veterans, as his scoutmaster and a lot of the troop fathers are veterans. In addition, he wants to raise awareness of the flag retirement ceremony, as he thinks that not a lot of people know about it but would like to get involved if they did. When the fire pit is completed, Sinofsky plans to advertise the date of the ceremonies, so townsfolk can attend.

Presently those wishing to dispose of old flags are asked to bring them to the VFW Hall where they are picked up by the troop and ceremoniously burned once or twice a year, usually in the spring, although due to COVID-19 there was no ceremony in 2020. Sinofsky has partnered with a fundraising group that provides the etched bricks. The cost depends on the size: a 4” by 8” brick costs $40 or $50 if you want to include clip art; an 8” by 8” brick costs $60, or $70 with the clip art. To support this worthy endeavor and honor a veteran with a brick, please go to the website www.fundraisingbrick.com/Mattsinofsky/ where you will see the options and the available clip art. Sinofsky is the son of Pamela and Darren Sinofsky and has an older brother, Nicholas. His future plans are uncertain other than he wants to go to college and major in communications.

Next Article
What’s Happening with Troop 66?
Over the past few months, Troop 66 has been doing many events.…