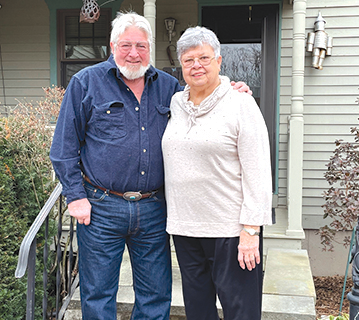 Jim and Sandy Mather pose happily outside their Suffield home.

A carpool ride from Warehouse Point to Broad Brook to attend a CYO (Catholic Youth Organization) meeting was the beginning of a friendship for fourteen-year-olds Sandy Perham and Jim Mather. They dated through high school and married in 1963, and this special relationship has remained the same for these 58 years.

Jim attributes their relationship to several important steps; they never have been really angry with each other, they communicate frequently and always put each other first. He added that her feelings mean so much to him and that they are truly compatible.

Sandy acknowledges that they have their own interests in life but have always been each other’s best friend. What is really amazing is that Jim and Sandy are also business partners, with Jim running the landscaping part and  Sandy operating the business side. The couple have two grown children – Ken, who is in business with his dad at J.W. Mather and Son Landscaping, and Karen who is one of the past owners of K & P Flowers & Gifts on East Street.

Jim, a polio survivor, had worked over the years for a water company, Hamilton Standard Space and Life Systems and for a landscaping business before he decided to buy that company and run it on his own in 1975. He worked part time in this business and part time as a chef in order to afford to buy the company

Before running the business side of her husband’s company Sandy tried many jobs such as working for Hartford Fire, Richard’s Drugs, and also as a bookkeeper and a dental assistant. Sandy put her talents to work in making wedding gowns and pocketbooks before she entered the Mather Company.

In her spare time, Sandy likes to travel, sew, and solve Sudokus. However, she especially enjoys attending tag sales. She calls them “the thrill of the hunt.” It was very exciting for her to find stained glass windows for her house and a cabinet full of toys.

The Mathers are very special to the Observer because they were one of the original advertisers in the paper and have supported it ever since. It is advertisers like them that enable us to bring the paper to all households and businesses in Suffield free of charge.

Congratulations to Sandy and Jim for being our Valentine Couple of 2021 and for running a very successful business in Suffield since 1975!

Next Article
Two Ps
The P. and P. No doubt you hear more than enough about…