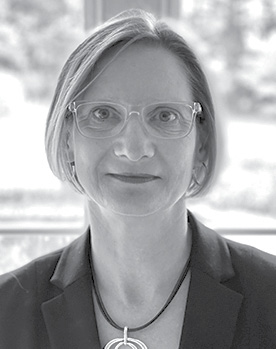 The First Congregational Church of Suffield is joyfully welcoming its new senior minister, the Reverend Diann Bailey. Fortunately, Reverend Bailey is not a “newbie” as a church leader in a time of crisis; she has been the associate minister at the church since 2014, and before that at the Congregational Church in Granby. Since 2019 she has been acting senior minister here at our Congregational church. She seems to have become established in Suffield just in time for the COVID-19 pandemic and has overseen the church’s valiant efforts to provide many important services to its congregation despite the restrictions we have all learned to live with.

Reverend Bailey grew up in nearby Massachusetts and graduated from Elms College with a nursing degree. For several years she served as a pediatric nurse in the ICU at Boston Children’s Hospital and later at Connecticut Children’s Hospital. After moving to Simsbury in 1996 with her husband and two sons, she realized the time was right for a career change and decided to pursue a further degree in a program run jointly by the Hartford Seminary and Andover Newton School of Theology, now located in New Haven and associated with Yale. In 2008, she received a Master of Divinity. Her decision to enter the ministry after success in the field of medical care must have been an unusual one – but for us, what a lucky one!

A career in nursing is a pastoral one in many ways, and Reverend Bailey reports that her skills and knowledge in her first field of endeavor have stood her in good stead as a minister during the pandemic. She was attracted to Suffield because the congregation at First Church seemed eager to increase its outreach to the wider community, both in Suffield and elsewhere, and to serve where needs exist. Reverend Bailey has a deep interest in the importance of interfaith worship, understanding that there are, as she says, “many paths to God.” Even more critical in these times is the fact that the focus of a church can no longer be only on the Sunday morning message, but also on worldwide issues such as the environment, racism and poverty.

The First Church of Christ, founded in 1698, must have survived many crises in its long life, and has remained strong during the last year, despite the challenges that all churches are facing during COVID-19. Its members are loyal, and the on-line services have attracted many people who could never have attended church in person; these will continue and may be expanded to include other activities as well. Shortly before Reverend Bailey joined the Suffield Congregational Church, the Baileys–now grandparents–moved to Granby, where they live in a historic home very like many of the ones here in Suffield; in that sense they are our neighbors.

It is reassuring and heartwarming to know that Reverend Bailey is excited about her new appointment, which because of the pandemic some might feel has come at an inopportune time for an aspiring senior minister. She has energy that reverberates even in a telephone interview, ideas carefully thought through, maturity but also the ability to adapt to new ways of thinking and doing, and to seek change in what has generally been regarded as a fairly tradition-bound institution. She is both intelligent and warm-hearted, a wonderful combination that bodes well for the future– both the future of the church and the future of Suffield.

Next Article
Happenings at First Church of Christ
Due to COVID-19 all In-Church events and gatherings, including Worship, have been…