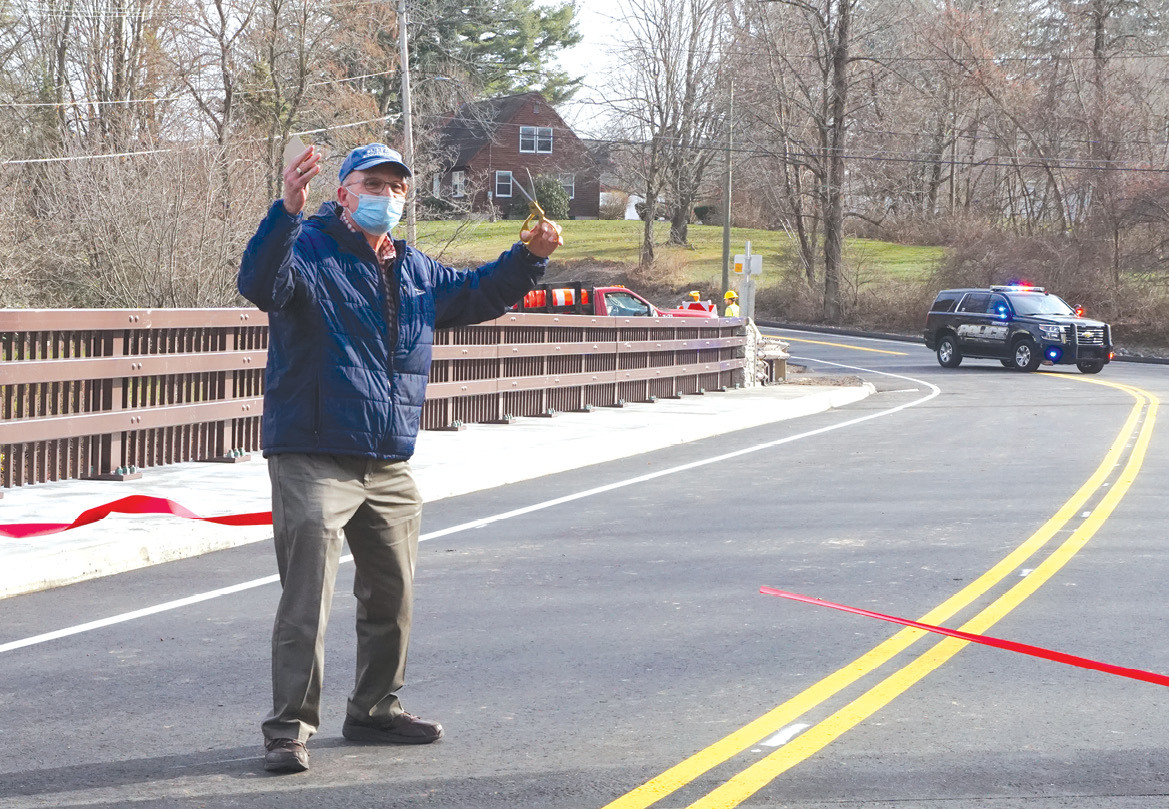 The bridge had opened informally a few days before, but at mid-day on December 11, a couple of hours after a small group of state inspectors had their look, Town officials and staffers assembled for the official ribbon-cutting ceremony. First Selectman Melissa Mack spoke briefly, thanking Cardinal Engineers and Arborio Construction for the work and commending all involved, especially Town Engineer Gerry Turbet, who was about to retire from his long career in Suffield.

Engineer Turbet, who oversaw the design and construction of what he says is the best and most beautiful of the bridges he’s worked on, was granted the first “official” crossing, which he experienced as a passenger in a Suffield police cruiser that broke the ribbon. The ribbon was put back, and after brief comments thanking everyone who had participated in the project, Gerry wielded his scissors.

Planning for the bridge had taken years. The previous bridge had been designated functionally inadequate by the state (though not structurally deficient) and the state authorized funds for 80 percent of the three-million-dollar cost. The new bridge would be wider, higher, and pivoted to a skew angle that mitigated the previous sharp curve required in Remington Street, so it would be much longer than the old one, with two massive abutments. Its single span would avoid the multiple piers of the old bridge, which often collected debris and increased upstream flooding.

Construction began in April last year, with plans to open in October. It had been planned to maintain at least alternating one-way traffic on the old bridge throughout the construction process, but delays in procurement of the six main concrete beams required a full shutdown to assure completion in 2020. Many drivers were troubled by the long detour that entailed. COVID-19 effects caused some other procurement problems, as well, so the (unofficial) opening was delayed until early December.

Even that date was problematic, as late in the construction sequence, when roadside guard rails were being installed, it was found that six of the guard rail posts for the bridge itself had bolt hole locations that wouldn’t fit the pattern of the bolts embedded in the bridge’s concrete. Happily for impatient commuters, officials decided that the bridge could be put to use briefly without those posts. Remanufactured posts were installed about two weeks after the ribbon cutting.

Next Article
Unchecked Patriot-ism
I have loved Tom Brady more than is probably healthy.