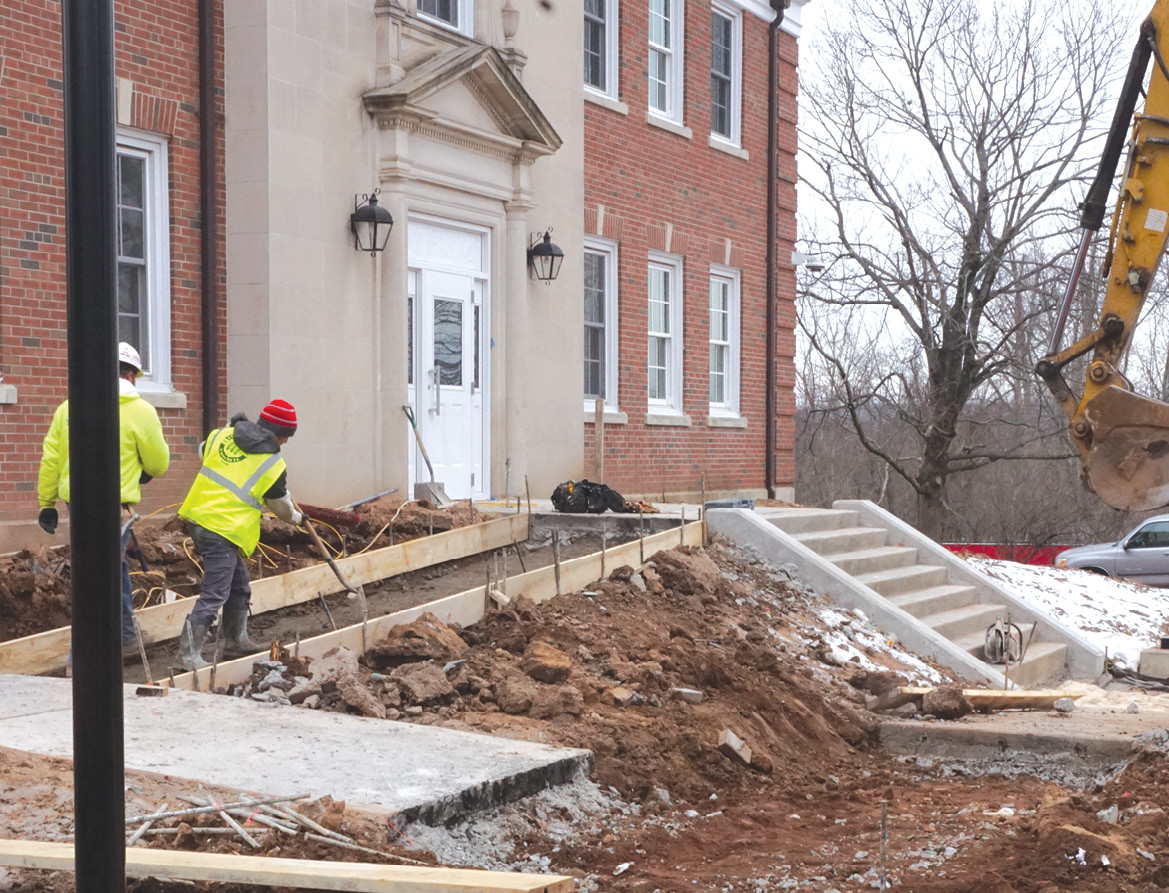 Construction workers on January 11 prepare the upper segment of the accessibility ramp for a new concrete pour at the Town Hall’s front entrance. The entire ramp had been poured some weeks before, but the cast-in-place sleeves for the handrail posts were found to be misplaced in most segments, which had to be demolished and repoured. Note the new front door, recently hung.

Construction crews have been busy at the Town Hall, inside and out, since the winter weather has not been bitterly cold. The renovation work is well along, and interior photos available on the Town website now clearly show what the spaces will look like.

In many areas, the old rooms are unchanged in shape. The new or revised spaces, like the new archives vault, the Town Clerk, the Building Department, and the large conference room on the first floor — all carefully planned — are less easy to appreciate in the photos. Beyond that, the “hidden” matters, like new HVAC, new power and digital wiring, absence of mold and leaks, and new bathroom facilities, should generally improve working conditions.

Brick siding matching the old building has been laid on the three exposed walls of the new vault added in the rear. A simple gable roof has been added, and after some discussion by the Permanent Building Commission, what would have been a dead space in that attic was given a gable vent, along with two new vents in the existing attic over the former selectmen’s conference room to which the vault is attached, whose existing cupola louvers were judged to be inadequate.

Virtual meetings of the PBC have recommended the approval of a number of such add-ons or changes to the contracted plans, including revised counters and credenza for the Building Department, new toilets, better stair treads in the rear stairway, and moving the mail space out of the break room. None of these changes were immensely expensive, but some got considerable discussion before approval, like the change to decorative railings for the front access ramp.

One item discussed by the PBC was the style of the front hall chandelier. The former chandelier was traditional, with many “candles” on gracefully curved bronze arms. The proposed replacement didn’t please First Selectman Melissa Mack, who considered it too “modern.” So “back to the drawing board,” or in this case, the catalogs.

In a clarification of the Observer’s last report on the Town Hall renovation, the security protection of the new vault addition includes a concrete ceiling, as well as the windowless concrete walls.

Plans call for completion by the end of January, with Town departments moving back starting in February.