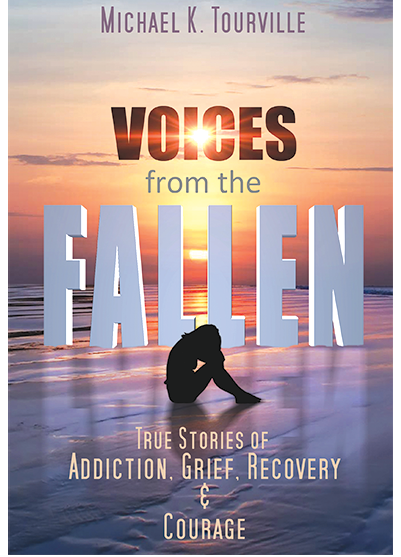 Michael “Mike” Tourville is the author among us. He is also the Sales and Marketing Director for Evans Cooling Systems located in Suffield Village. During the last twelve years, he has come to know many Suffield residents; most notably, Scott Seabury.

His latest book, Voices from the Fallen, is a group of true stories that takes you through the lives of eight people who have “fallen” into the abyss of drug addiction. This is a subject that hits home for many. If you aren’t impacted first-hand, then you probably know about someone who has an addiction or has died from an overdose. The struggles, hopes, failures and disappointments are vividly and openly discussed in the first person with outside perspectives from family members and friends.

Mike chose this topic because it had a personal impact on him; seeing someone he knew going through the agony and again when friends were devastated by the loss of their teenage son to an overdose. Drug addiction affects a diverse group of people. The eight stories chosen demonstrate that diversity.

You will read about the mother with an addicted son who recovered only to have the second son become addicted. Another was given drugs at a young age by his father to “calm him down.” At age 53, another became dependent on pain medication. For some, you will also read about the success at overcoming the addiction. And while there is elation over that success, there is always the over-arching shadow of a possible relapse.

This book was written for the purpose of helping readers know and understand the pain and anguish suffered by everyone around those who are addicted. Mike’s hope is to save lives. “If it helps to save one life, I succeeded.” Voices from the Fallen was written with his grandchildren in mind, meaning your children and grandchildren can read it without encountering inappropriate content or dialogue.

Here is an excerpt from the book’s Introduction: “There is no quantitative data that can measure unspeakable grief, or endless suffering through years of addiction. Or the lying, stealing, living with false hope, and repeating relapses… or bracing every day for the call about the fatal overdose.” As Mike would say, “Don’t be silent and second guess yourself at their funeral.”

Drug addiction isn’t just heroin; it’s any drug, prescribed or otherwise, on which you become dependent. Did you have a toothache, injury, or surgery that required pain medication? Could this be you or someone you know? Think about it.

Next Article
One Good Thing…
As we are all aware, COVID-19 has been devastating for people in…