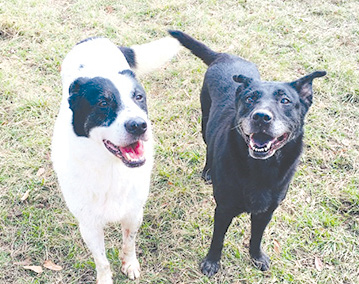 Domino, left, and Paddy were recently adopted by the author’s family after the almost-twelve-year-old mongrel siblings had spent their entire lives being passed over in a no-kill shelter. They have turned out to be a happy choice.

As we are all aware, COVID-19 has been devastating for people in the United States and around the world. The pain, loss, and suffering accompanying this pandemic have been immeasurable. However, during this terrible time there has been one good thing: animal rescues have been off the chart. While before COVID-19, dogs would sit for months and years on rescue websites; once most people were stuck home, dogs became a possibility. Would-be adopters found that dogs they applied for were scooped up quickly and it would often take multiple attempts to secure a desired canine.

We have adopted dogs for 35 years. Last March we were ready to add to our then team of two dogs, having recently lost one. We typically rescue dogs that are less adoptable due to age, color, or infirmity. We applied for a shepherd mix named “Jack” from a rescue in Mississippi. Jack was taken, but would we be interested in his brother, Domino, or sister, Paddy? Sure! We learned that Jack, Domino, Paddy and five siblings were born to a shepherd mother and a who-knows-who father on Christmas Day in 2008…. 2008!!! They had lived their entire lives, almost 12 years, in a no-kill shelter. After the initial possibility of adoption during puppy and young dog years, their hopes of getting out diminished… until COVID-19. Only one sibling, Freckles, was adopted as a puppy. The rest grew into teens, then adults, and were continually passed over. Most adopters want young dogs, and few choose black ones – all but two of this litter are black.

Domino arrived and is amazing—sweet, energetic, and able to climb five-foot fences! Our vet said that he could only be improved by being younger! In August, we decided to add a fourth dog to our family and did a lot of looking. We assumed that Domino’s sister Paddy had been adopted but when we wrote the rescue, we learned that she was still waiting. She and Domino were very attached and so this was a no-brainer. Paddy arrived in early September, literally about half the size of Domino, black with a bit of gray. They were overjoyed at the reunion and quickly returned to their sibling groove, also attaching to our other two dogs, Wiley and Viggo. They are fascinated with freedom, wildlife, and snacks (not necessarily in that order)! The best present was learning in December that the last two of the sib-ship were being adopted together, and also headed north. It took a pandemic to help most of these eight almost 12-year-old gems get out of the shelter and “come home.” There is always hope. ζ