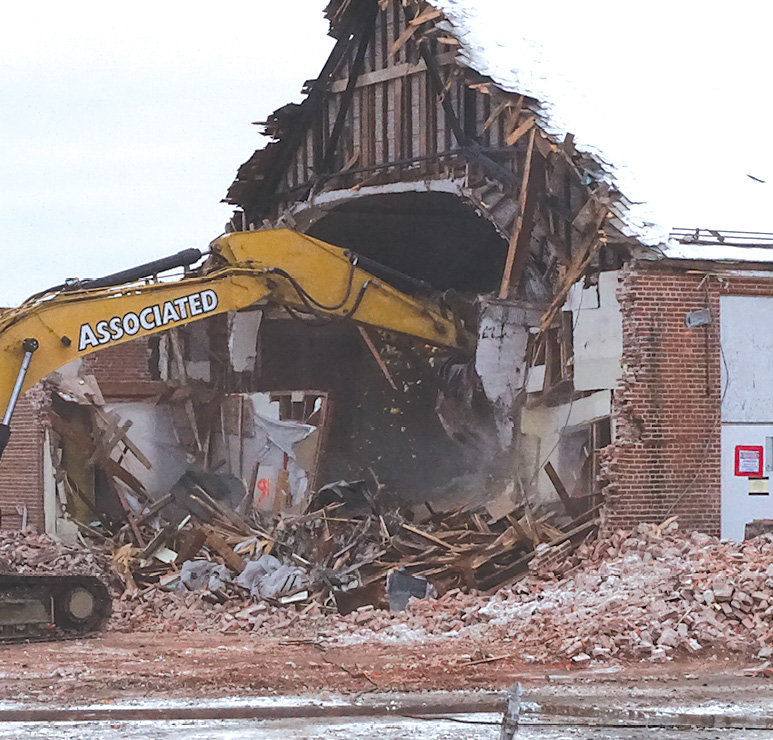 On January 28, the second day of demolition, the excavator reaches into the exposed north end of Bridge Street School’s gym/cafeteria to tear out more of the kitchen, which occupied the space of the original stage under the high proscenium arch. In the 1920s, the town enjoyed silent movies there on Friday nights.

It was a long, complicated story. The elementary school built on Bridge Street in 1924 to serve children who lived near the Town Center had been closed in 2004 when it was no longer needed. For years it was used for storage, a police dog training school, and a convenient location to sort and store books for the annual Friends of the Library book sale. It was also considered as the possible location for an apartment house, for conversion to serve as a new library, and most recently for adaptation and expansion into a Town community center.

The community center proposal was approved by a Town Meeting vote in 2015 appropriating $8.4 million for the project and authorizing the issuance of bonds up to that amount. But it was soon learned that the cost would be greater that what had been voted, and the proposal was not pursued by the Town administration in spite of protests by the project’s supporters. Several years passed, and the building, inadequately maintained, developed mold growth and various other deterioration until the Town Building Inspector posted the doors and ordered the building remediated or torn down.

Hazardous material in the building (mostly asbestos) was removed first, as regulations now require. That work was completed, largely out of sight. Then came the very public demolition, with many residents coming to mourn the passing of the building they remembered well. One alumnus, who came to take photos, said watching was “like having your heart torn out.”

The crew from Associated Building Wreckers spent more of their time sorting the rubble than in actual demolition; metal, wood, and other material had to be separated from the brick, terra cotta, and concrete rubble. But in a week and a half, there was nothing left above the floors of the main level, and a good deal of the recyclables and the rubble had already been removed from the site. By the Observer’s press time, the contractor was finished with what could be done this winter. ABR has the obligation to leave the site graded smooth and seeded with grass, a job that will have to wait for the ground to thaw.

Town officials have discussed developing the spot, with its playing field alongside, as a park.

Next Article
Freshing My Feathers
Gold Finch transitioning to his summer coat.