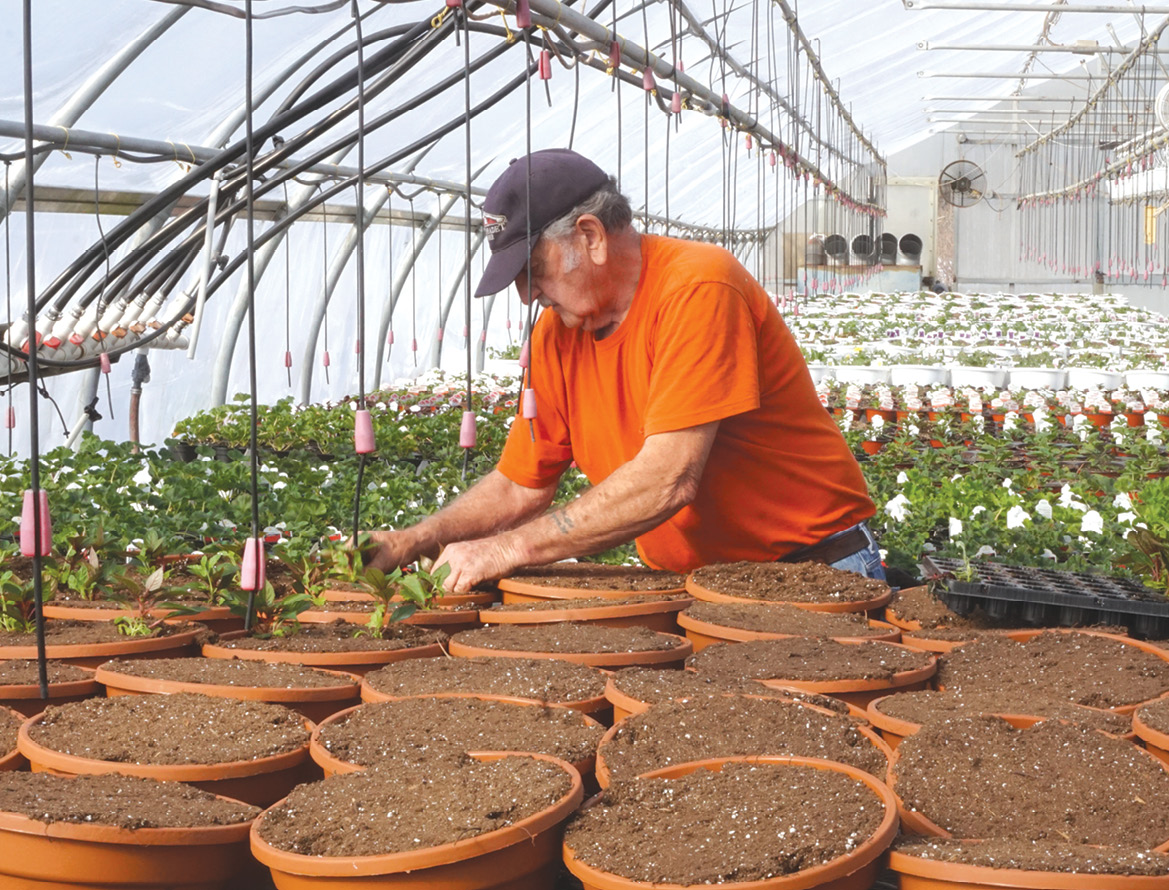 At the Goodyear greenhouses on Mountain Road at the end of February, Sonny Leavitt, well-known from his career with the Suffield Highway Department, pushes two tiny geranium seedlings into the fertile soil of a maturing pot. Trays of seedlings had germinated in multi-layer racks which were wheeled from another greenhouse into this one, where the transplanted seedlings can get plenty of sunlight as they grow to offer local gardeners a nice variety of annual flowers for the summer.

When this reporter stopped by Goodyear Farms to see what was going on at that cluster of greenhouses at 676 Mountain Road, he met Allen Clark, who explained that this location is actually part of a local agricultural conglomerate called Clark Farms, Inc. In addition to the greenhouses in Suffield, the family enterprise owns and farms considerable acreage in four towns and two states and operates a popular eatery and farm stand in Granby.

Some years ago, Allen’s father Allen (Butch) Clark, Sr., married Grace Ann Goodyear of Suffield, whose family farmed on Mountain Road. She is now the matriarch of Clark Farms, which was formed when Allen, Sr., merged his family’s East Granby farm with Grace Ann’s family’s property in Suffield.

The family’s Griffin Farmstead Goat Dairy is in East Granby on that town’s Copper Hill Road. (The continuation of Suffield’s Copper Hill Road into East Granby is called Griffin Road.) Only 11 years ago, the combined family acquired Bushy Hill Orchard in Granby, a mature orchard with 15,000 dwarf trees equipped with trellises for easy picking and good sunlight. The trees are many apple varieties, with recently-added peaches, pears, nectarines and plums. Other Clark Farms property is leased out to corn and tobacco growers. That includes land on Mountain Road east of the greenhouses and considerable acreage in the south-western-corner of West Suffield north of Phelps Road. That land extends into the south-eastern corner of the Southwick Jog. (In Suffield we generally call that boundary aberration the Notch.)

But Clark Farms’ biggest public attraction is the substantial restaurant and farm stand in a converted barn at the orchard on Bushy Hill Road, a bit north off Route 20 in Granby. The eatery seats 55, not counting the patio, where a brick pizza oven has been added. Family members help staff the restaurant, which also offers a big selection of Bushy Hill baked goods and preserves and the “Farm to Table” vegetable bins on the porch. In autumn, an added activity is selling quantities of apples, some “UPicked,” but many harvested by seasonal Jamaican farmhands, housed in a dorm next door.

Some of the apples are fed to a cider mill behind the restaurant, to which a five-tank fermentation facility has recently been added. The family has just produced its first 750-gallon batch of hard cider to expand their offerings.

Allen Clark’s wife Becky, who manages the restaurant, was happy to report that they would soon be expanding their hours, which have been limited to breakfast and lunch, to include week-end dinner three days a week. She added that they also offer catering and special events, seasonally.

Farming is often a family business; in this case the extended Clark-Goodyear clan has diversified impressively. And not to omit another family extension, Sonny Leavitt, pictured at Goodyear’s with this report, is Becky Clark’s father.

Next Article
Town Charter Review Currently Underway
A committee is currently reviewing our Town Charter and governance practices. The…