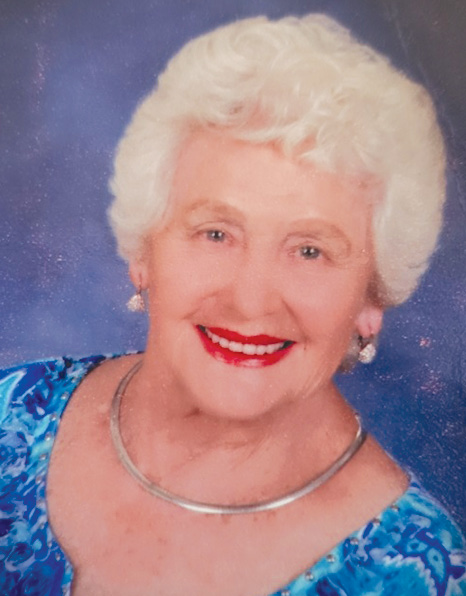 In May 1937, Florence Egan and her Bridge Street School classmates marveled at the Hindenburg dirigible when it flew over Suffield on its fateful voyage to Lakehurst, New Jersey, where it burst into flames. “It was so close, we felt we could touch it.”

Growing up, Florence lived near the town center, where the action was. She knew everyone and met Joan Fontaine and Olivia de Havilland when they came to town to sell war bonds on the Green.

In those days, kids roamed and roller-skated, generally unsupervised. When word got around about “company” in the jail below town hall, the kids went to look. Mostly, the inmates were inebriated men picked up after a card game in the empty train cars. The candy store on South Main Street was fascinating for the candy and Mrs. Lutwinka’s missing finger. One day they watched the train discharge New York City bicyclists, eager to tour the area, some on high front-wheeled bicycles. In warm weather, Florence and Joanne Rutkiewicz fished for eels in Stony Brook while sitting on a cardboard suitcase, a convenient storage for captured eels. In winter, she and her best friend, Dottie McCarty, née Kaplan, formed igloos to eat candy while nestled inside. It seemed like there was more snow back then.

Rattlesnakes were plentiful, especially near the mountain. Florence encountered one while mushrooming with her parents. Dead rattlesnakes were often displayed for bragging rights at Spencer’s store on Depot Street (Mountain Road).

At twelve, Florence worked on tobacco farms, when the legal age to work was fourteen. She and the other underage kids hid in the outhouses when inspectors came. During the war, for a week, when there was a shortage of tobacco pickers, she worked alongside heavily guarded German war prisoners detained in Windsor Locks. Their favorite song was “Don’t Fence Me In”.

Townspeople including Florence collected metal for the war effort, bringing it to the scrap yard by the train depot. One day, a train car appeared with an elegant plush interior. It also was destined for scrap.

At the train depot, Florence was allowed to play with the stamps used for parcels. Mr. Broder bought Florence and her friends an ice cream soda at the Suffield Pharmacy, a rare treat, to celebrate their upcoming First Communion. The Suffield Academy headmaster let kids watch movies at the school on Saturday nights. Gilbert Bajek brought kids with him to Babbs roller-skating rink when he played the organ there.

Florence’s favorite teacher was Anastasia Sheriden who stayed after school to help with schoolwork when Florence was ill with scarlet fever and double pneumonia. During her illness, her entire family was quarantined with a sign on the door. They were not even allowed to get the mail.

In first grade, Florence was held back a year, as many Polish children were, by Miss Bawn. Was there no room for them in the upper grades, as she was told?

One of Florence’s earliest memories is waking up to find gypsy wagons parked near the brook behind her house, with the gypsies’ freshly washed clothes hanging on lines. When the clothes were dry, they departed.

Her parents Francis Winiarski and Mary Mrozik were Polish whose homeland was occupied by Austria. They emigrated separately in 1917. They met while working at a tobacco warehouse and married in 1918 at St. Joseph’s Church. They studied English on the town hall’s second floor before becoming proud American citizens.

In 1949, the year she graduated from high school, Florence was voted May Queen. She met Jim Egan, her future husband, in school when he moved to Suffield. The first time he saw Florence, he knew that she was the girl he would marry. They married in 1955 after he fought in the Korean War while serving six years as a Marine.

Theirs was a happy marriage. There were motorcycle rides, horses, horse shows, airplanes and three children: Jay, John and Libby. Jim taught flying lessons at the Simsbury Airport where they kept their J3 Cub plane. He worked in construction, then later sold insurance. Jim died in 1991 from cancer.

Florence remembers so much laughter and fun, even when she worked in tobacco; as an assistant to Dr. Scavotto, a dentist; at Rapid Express; and as a mini-bus driver when she frequently chauffeured her mother. After Jim died, Florence worked at Suffield House, retiring just eight years ago. She is happy when she reflects on her life, her horses, her friends, her family. Life is good.

Next Article
Timberrrr!
A plume of sawdust shoots out of the chainsaw’s cut as Rick…