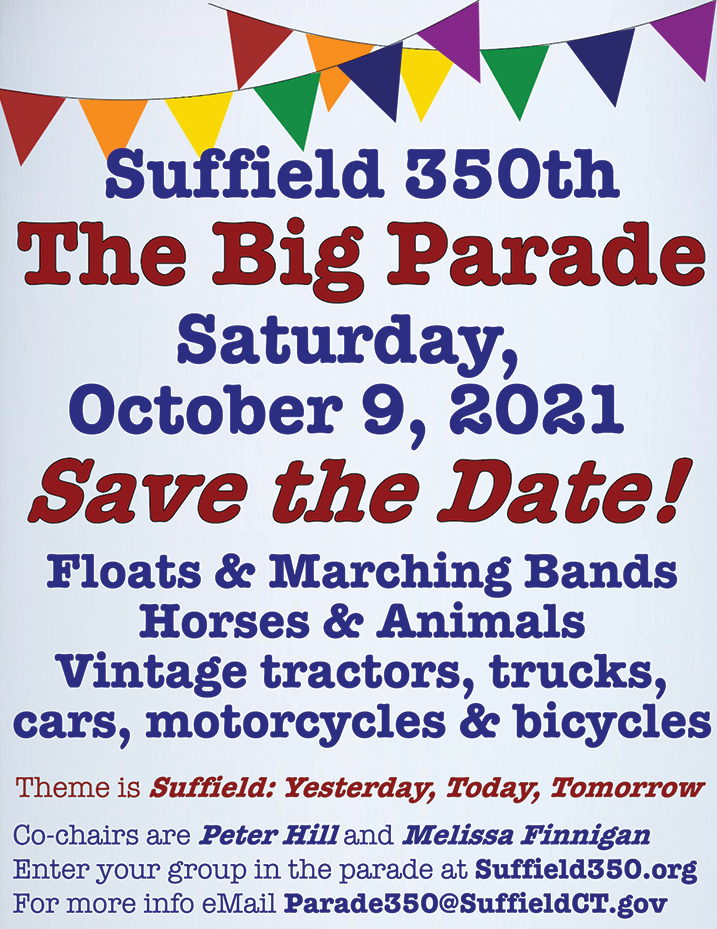 The Suffield 350th Anniversary Parade Committee has begun to sign up participants, organizations and floats for the Saturday, October 9  event.

The announcement follows a year-long postponement due to COVID-19. 350th Parade Co-Chairs Melissa Finnigan and Pete Hill plan an extensive outreach effort which includes the police, fire and ambulance departments, the town’s public and private schools, volunteer organizations, local farms, sports leagues and marching bands. A number of state and local dignitaries will also be invited. Floats are welcome with planning and preparation encouraged to begin during the winter doldrums.

“We envision an amazing parade that celebrates not only our beautiful town, but our community that has been waiting for a year for a reason to cheer,” said Finnigan. More information and an application form can be found at www.suffieldct.gov/our-town/350th-celebrtion/parade.

Founding sponsor PeoplesBank, formerly First National Bank of Suffield, will continue to act as honorary co-chair for all 2021 350th celebrations including the parade.

Suffield’s historic Main Street sets the stage for the parade route with specific details still in the works. Parameters for floats will be available on the noted link above and created around the theme: Suffield: Yesterday, Today, Tomorrow.

Next Article
Beloved Bridge Street School Razed
It was a long, complicated story. The elementary school built on Bridge…