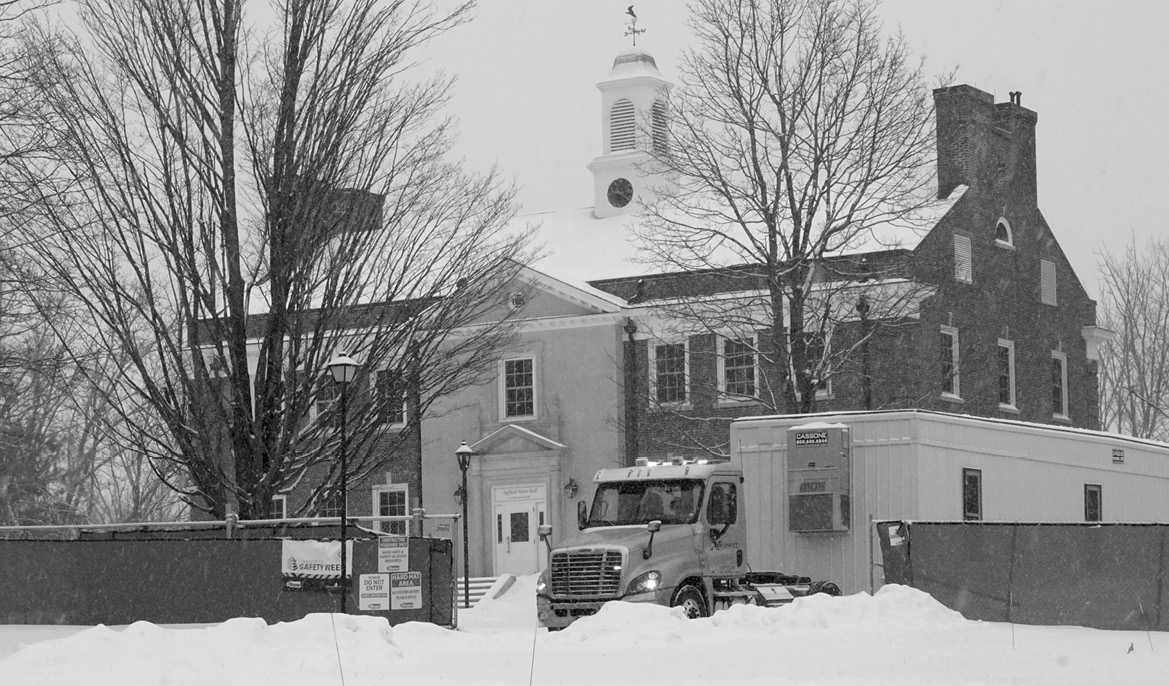 At about noon on February 9, the driver prepares to haul his big construction office trailer out of the Town Hall driveway. The red-sheeted fence was about to be removed, and only a few final details remained to be completed in the renovation project.

There were a few things yet to do, but they weren’t expected to interfere with Town departments moving back into the renovated Town Hall after the furniture is delivered. At the January 21 Permanent Building Commission (PBC) meeting, there was a general feeling of satisfaction, and the Certificate of Acceptance by the Building Inspector was expected soon after. Commission members who had visited recently made comments like, “It really is nice.” And Chairman Joe Sangiovanni said he was amazed at how the project worked out, commenting, “It looks first class; like a new building. Great job, everybody!”

All the rest rooms are nicely updated. The new meeting room fire escape was installed early in February. The new front door was installed, with a new Suffield Town Hall sign above. The accessibility ramp was finished, but without hand rails. That shouldn’t interfere with moving in, as the building will at first be occupied only by Town staff, none of whom require the ramp. They will park in back and use the lower door, with no steps, as well. The design of the ramp and front stairs hand rails was the subject of considerable controversy, which was settled too late for their installation schedule. They are expected in March; installation should take only a few days.

Some furniture was yet to be delivered, and the State had not yet inspected and approved the new records vault. But the portable construction office was gone, as was the surrounding security fence. Final landscape repair and seeding, of course, must wait until spring.

Discussions in the PCB meeting indicated that the renovation was completed within the approved budget, but details of how much was left unspent were still being worked out.

At the time of this writing, Facilities Manager Chris Matejek said he was about to meet with First Selectman Melissa Mack to plan the move-in. He thought it would be a slow process during the spring.

The Town Clerk will return from Fyler Place to new quarters in the former meeting room on the lower level. That room now has a secure door into the new records vault. Also on that level will be the Building Department and offices shared by Planning and Zoning, Conservation, and Economic Development, along with additional storage space and much-improved rest rooms.

On the first floor, the layout of the left side will be very much like before the renovation, with the Tax Collectors and Assessors returning there, the Assessor’s separate office no longer separated and only a small change in the break and mail rooms. On the other side of the lobby, the space is totally changed, with a new meeting room occupying the entire space.

Upstairs, the Finance Department will return from Ffyler Place to their old location at left rear. The Communications office and a secure, specially cooled server room are at left front. The First Selectman will return to her previous office at right front, with the Human Relations department and the Youth Services Officer will also be on that side of the building.

It took several years and proposals and a number of different architects to settle how to upgrade our town’s headquarters, but once the renovation project was awarded to Gilbane Construction and Q A & M Architects, the work got started last July, and progress continued without major surprises and delays. We can all look forward to being allowed inside when the pandemic restrictions ease, to see the finished product and, after some time, learn how the revised working conditions are viewed by Town staff.

Next Article
Are you reading this?
It’s not always clear to me if folks in town read this…