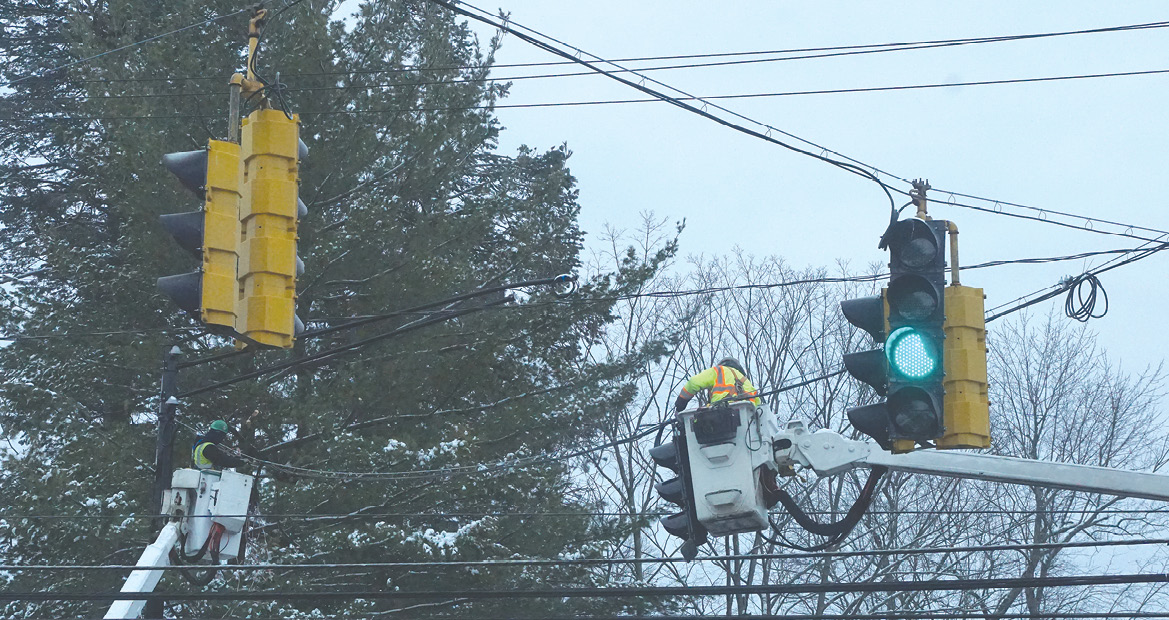 Two electrical workers, each in his own bucket truck over the intersection of Main Street and Bridge Street, string one of the new support cables for the new signals to be hung there. Both Main Street intersections in the town center are being updated by Conn DOT.

The State Department of Transportation’s project updating the traffic signals in the town center resumed in late January when an “above ground” crew from NY Conn, the DOT’s contractor, came to continue the work their “in-ground” crew had done in late September through October. The new crew installed the two new steel towers, one at the southeast corner by Bridge Street, the other in front of the library. Then they strung new support cables and hung new signal lights, all at the Bridge Street intersection, again with considerable traffic disruption. But the work was suspended when the weather got snowy at the end of January. A NY Conn manager advised the Observer that the work would probably resume in March.

What’s left to do is hanging the new lights at the Mountain Road intersection on the long arm reaching out from the new tower there, and installing the cameras at the ends of the long arms at both intersections. The NY Conn manager said the next delay would be waiting for Eversource to connect the electrical power. Then NY Conn will return to remove the old lights and support cables. He had no comment on whether updating the equipment would be followed by a change in the lights’ timing sequence.

Next Article
What’s happening at SCA this month?
SCA staff is assisting CDC-eligible, older residents in exploring their options for…